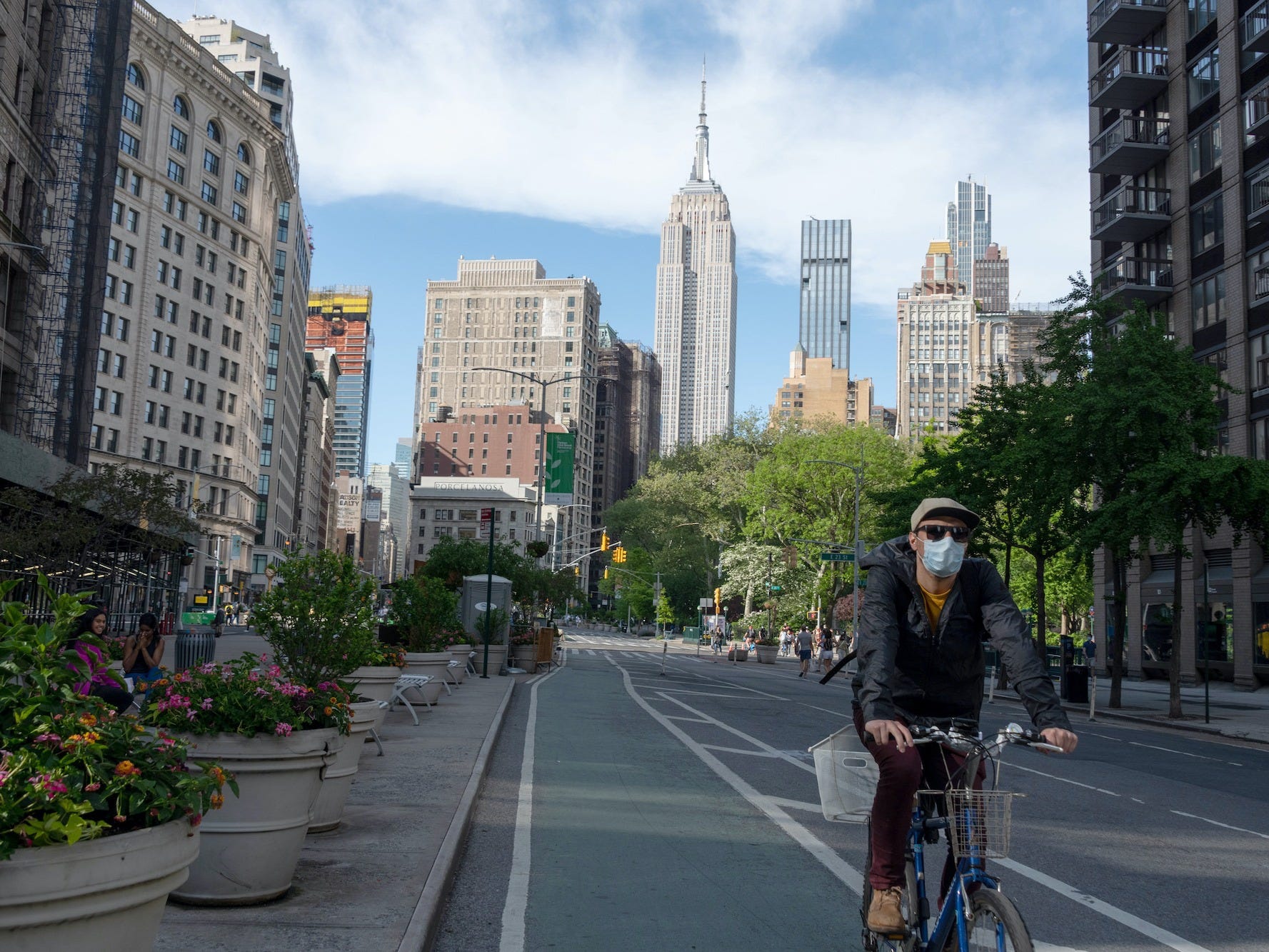 A person wearing a mask rides a bike in Flatiron as the Empire State Building can be seen in the background amid the coronavirus pandemic on May 16, 2020 in New York City.

When de Blasio shared the order’s text with New York Gov. Andrew Cuomo, the governor reportedly derided it and said that the term “shelter in place” sounded “like it was a response to a nuclear apocalypse.”

Cuomo eventually locked down the state of New York on March 22, but the delay is likely a contributing factor as to why the state has become the US epicenter of the coronavirus outbreak.

San Francisco was initially expected to become the epicenter of the coronavirus outbreak in the US, as it was geographically positioned closer to China, where the disease was first discovered.

But San Francisco and other Bay Area counties, as well as the entire state of California, acted early and issued stay-at-home orders on March 17 and 19, respectively. The quick action has earned the west coast region national praise for stemming the spread of the disease.

New York, on the other hand, has instead become the epicenter of the US outbreak, with the majority of reported cases in New York City. And a new ProPublica report explores how both San Francisco and New York City responded to the disease.

Related: Why the Bronx Has Double COVID-19 Cases As Manhattan

And Breed reportedly sent a copy of the shelter-in-place order that went into effect on March 17 to de Blasio in case it could be of use. When de Blasio shared the order with New York Gov. Andrew Cuomo, the governor reportedly derided the order and said that the term “shelter in place” sounded “like it was a response to a nuclear apocalypse” and would scare people.

Cuomo also reportedly questioned whether it was within de Blasio’s jurisdiction to even issue a stay-at-home order.

“No city in the state can quarantine itself without state approval,” Cuomo reportedly said. “I have no plan whatsoever to quarantine any city.”

But he did, however, eventually lock down not just New York City but the entire state on March 22, just five days after the San Francisco Bay Area officially entered its own.

It’s worth noting that New York City is the country’s most populous and densest, while San Francisco is the second densest and 13th most populous.

But that five-day delay is likely a contributing factor as to why New York City has been one of the hardest-hit cities in the nation and why San Francisco’s infection count has remained lower. Experts were quoted in a New York Times article in April saying that their research showed a much lower death toll for the state had officials acted a week or two sooner. And the former head of New York City’s Health Department, Dr. Tom Frieden, echoed that conclusion in a tweet in April, as ProPublica notes. “Days earlier & so many deaths could have been prevented,” Frieden posted.

The ProPublica report notes that Cuomo has since said he wishes he would have responded more quickly to the coronavirus. It also points out that both Cuomo and de Blasio are now extremely cautious about phased reopening plans for New York City because of the magnitude of its outbreak.

You can read the full report on ProPublica here.