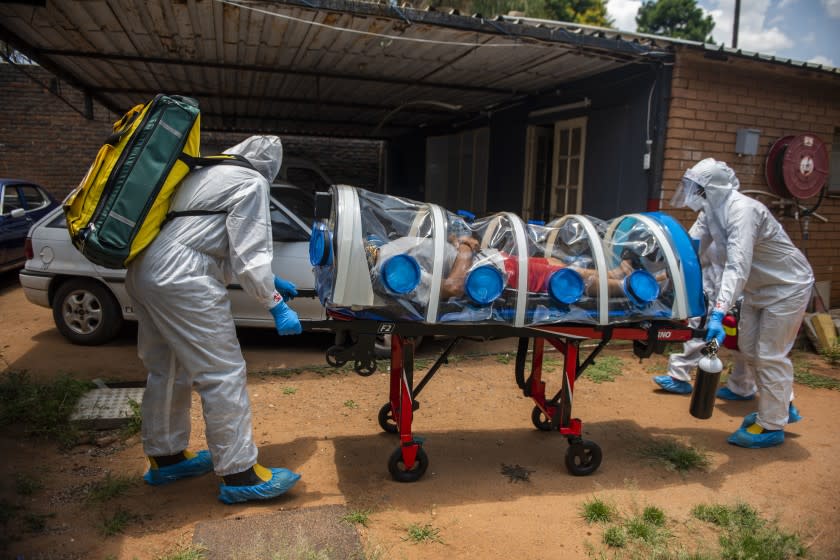 New data showing that two COVID-19 vaccines are far less effective in South Africa than in other places they were tested have heightened fears that the coronavirus is quickly finding ways to elude the world’s most powerful tools to contain it.

The U.S. company Novavax reported this week that while its vaccine was nearly 90% effective in clinical trials conducted in Britain, the figure fell to 49% in South Africa — and that nearly all the infections the company analyzed in South Africa were the B.1.351 variant that emerged there late last year and has spread to the United States and at least 30 other countries.

Johnson & Johnson announced Friday that its new shot was 72% effective against preventing moderate or severe illness in the United States, compared with 66% in Latin America and 57% in South Africa.

Laboratory tests had already suggested that the two vaccines authorized in the United States — made by Pfizer-BioNTech and Moderna — trigger a smaller immune response to the South African variant.

Now there is evidence from tests in people that some variants are less vulnerable to certain vaccines.

“From an evolutionary biology perspective, this is totally expected and anticipated,” said Dr. Michael Mina, a Harvard epidemiologist. “But it never feels good to be validated on something so scary.”

Researchers once believed it would take several more months, or even years, for the virus to develop resistance to vaccines. They said the speedy evolution is largely a result of the virus’ unchecked spread. More than 100 million people have been infected worldwide, and each of those infections is an opportunity for the virus to randomly mutate.

A mutation that happens to give the virus an advantage — the ability to resist the body’s natural defenses, for example — can become the basis for a heartier variant.

One early sign that this process was underway was the significant number of people who were contracting the coronavirus a second time. It appeared that the training their immune systems received during the first infection was failing to protect them from new versions of the virus.

Scientists at Moderna and Pfizer-BioNTech worried that the same thing could happen with immunity induced by their vaccines. In laboratories, they took several versions of the virus and exposed them to blood samples from a small number of people who had been vaccinated.

Experts had cautioned that laboratory tests were an imperfect model for understanding the immune response in people.

Other parts of the immune system, such as T-cells, might play a role in fighting a variant, even when neutralizing antibodies fall short, said Marc Lipsitch, a Harvard epidemiologist.

That’s why the Novavax trial — the first to test the interactions between variants and vaccines in the real world — was so concerning.

“Whether people who have been vaccinated get infected with the variant — that’s the real proof in the pudding,” said Dr. Otto Yang, an infectious disease researcher at UCLA.

Novavax cautioned that its South Africa study, which included about 4,400 patients, was too small to offer a precise measurement on the vaccine’s efficacy.

The Johnson & Johnson results provided further evidence that the problem was serious. Experts said the weaker performance of the vaccine in South Africa — where it was tested on about 6,500 people — almost certainly was a result of the predominance of the variant circulating widely there. Researchers believe it is more contagious than other variants and that it has become more common in South Africa and elsewhere since the trial began in September.

Researchers said variants were also likely to blame for the subpar showing of the Johnson & Johnson vaccine in Latin America — where is was tested in more than 17,000 people in Argentina, Brazil, Chile, Colombia, Mexico and Peru.

The mutations of greatest concern are on the spike protein on the surface of the virus, because the current crop of vaccines train the immune system to recognize that protein. Mutations there increase the likelihood that the virus will slip by undetected.

Mina likened the process to searching for a criminal by memorizing the appearance of only his nose and mouth. At first, this may prove sufficient. But if the criminal gets a nose job, you’ll find yourself wishing you’d learned about his eyes, ears and hair texture as well.

Mina said we need a more diverse arsenal of vaccines, employing a variety of approaches, to address the issue.

In the meantime, Moderna has announced efforts to develop a booster shot to add to its current two-shot regimen in order to fend off the South African variant. The company also plans to test whether a third shot of the original formula could help with other strains.

BioNTech, the company that worked with Pfizer on its shot, is also considering developing an adjusted vaccine.

The United States reported its first known cases of the South African variant Thursday, in two people in South Carolina. The U.K. strain, which is also thought to be more contagious, is also circulating here.

In a briefing for reporters Friday, Dr. Anthony Fauci, director of the National Institute of Allergy and Infectious Diseases, said the confirmation that more transmissible strains are now in the U.S. is a “wake-up call” that underscores the need to rapidly vaccinate Americans.

“Vaccinating as many people as we can, as quickly as we can” is the key to slowing the ability of the virus to mutate, he said. “Viruses cannot mutate if they cannot replicate.”

The U.S. is vaccinating an average of 1.2 million people per day, according to Dr. Rochelle Walensky, director of the Centers for Disease Control and Prevention.

Experts say that is far too slow, because there’s no knowing what kind of advanced variants will exist by the time the vaccination campaign reaches critical mass.

They stress that vaccination must be accompanied by defensive tactics like masking and social distancing until case numbers are negligibly low.

“If you think you’re going to simply vaccinate your way out of this, it’s going to be like whack-a-mole,” said Susan Butler-Wu, director of clinical microbiology at LAC+USC Medical Center.

An effective vaccination campaign must eventually stretch around the world. If an impressive strain were to pop up next year in, for example, Brazil, even a fully vaccinated America could be in danger.

“You can vaccinate the hell out of America,” said Mina, but “until everyone is protected, we’re all still at risk.”

Fauci called for bolstering the government’s ability to detect new viral mutations. Genetic sequencing efforts have been fragmented, relying on academics and other groups to voluntarily upload their findings and pass them around. In all, the United States sequences just 1% of the millions of positive samples collected during routine testing for the coronavirus.

“We’re shining a flashlight around in the dark, hoping we spot dangerous variants,” said Anne Rimoin, an epidemiologist at UCLA. “What we really need to do is flip on the lights.”