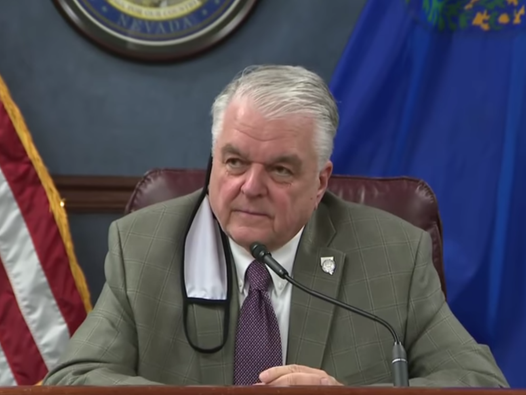 Nevada governor Steve Sisolak has issued a mandatory face mask order, amid rising coronavirus cases across the US.

Mr Sisolak announced that from Friday, Nevada residents will have to wear a face mask in public places, and when they are outside and it is impossible to keep a distance of six feet from other people.

During a press conference on Wednesday the governor told reporters: “This is a state that prides itself on the spirit of individualism.”

Mr Sisolak, who is a Democrat, added: “So I’m asking all of us to take our independent spirit and turn that into our individual responsibility to keep the lights on for businesses throughout our state.”

Restaurants in Nevada have been allowed to reopen at 50 per cent capacity since 9 May and casinos, which are the main attraction for its tourism industry, since 4 June, but the governor warned residents that social distancing measures are still in effect.

“As I said last week, we’re not post Covid. We’re still in the middle of the first phase, the first wave of Covid,” Mr Sisolak said.

People who have a medical condition that prevents them from wearing a face mask, homeless people and children between the ages of two and nine are exempt from the new order, according to Eater Las Vegas.

Businesses have also been advised to implement a “no mask, no service” policy, but staff should ask someone if they have a medical condition that exempts from from wearing a face covering before denying them entry.

The Democratic governor claimed that the order is not a political decision, and told reporters: “I don’t know why protecting our health and our neighbours’ lives became a political, partisan, or even philosophical decision. For me it’s none of those. It’s a medical necessity, a human obligation, and is good for business.”

The governor’s order comes amid rising coronavirus across the US, with states including Florida, Texas and California recently announcing record daily highs.

Last week, in reaction to the rise in cases in Nevada, where the state has seen a four week upward trend in new daily cases, Mr Sisolak announced that he would be extending Phase Two of the state’s lockdown easing measures until the end of the month.

Under Phase Two measures, certain businesses such as nightclubs are still not allowed to open, and the governor has asked residents to continue following social distancing measures, so that the state can move forward and not go back into lockdown.

“They’ve avoided group gatherings and so forth. They (practise) social distancing and good hygiene, and they’ve worn facial coverings,” the governor said in reference to Nevada residents.

“I don’t want to let that all go for naught by us having to take a giant step backward.”

According to a tracking project hosted by Johns Hopkins University, there are now more than 2.4 million people who have tested positive for coronavirus in the US. The death toll has reached at least 122,481.

Don't Miss it The CDC simply added new COVID-19 signs to its checklist. This is our operating checklist of each symptom, ranked from most typical to least.
Up Next Japan suspects Kim Jong Un could also be ailing amid coronavirus