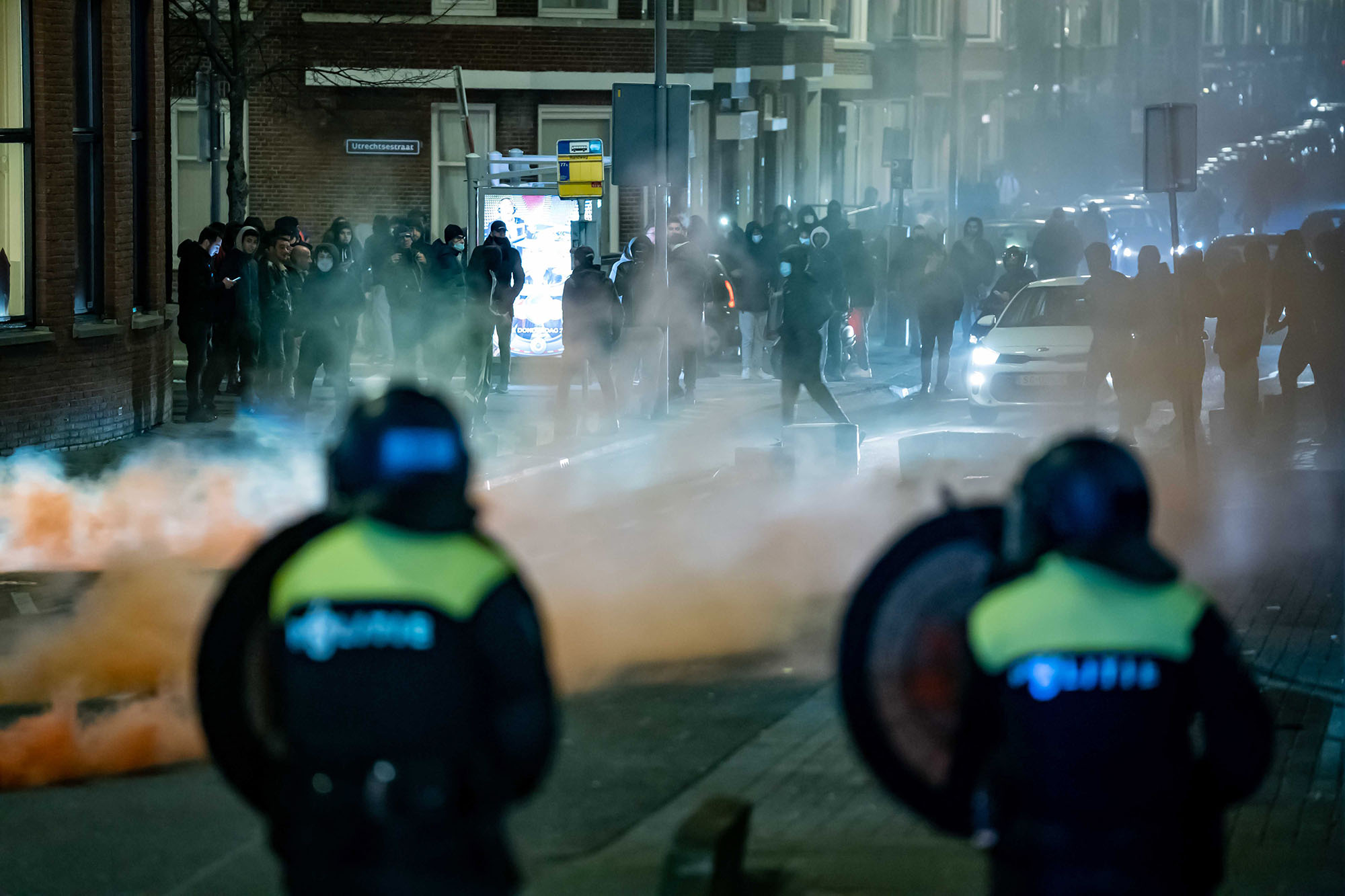 Anti-lockdown protesters in the Netherlands set fires, looted stores and fought with cops for a third consecutive night of rioting after a strict curfew was imposed — with a mayor warning the nation was “on our way to civil war.”

At least 184 people were arrested during Monday night’s ongoing riots as at least 10 cops were injured as police in some cities fought back with water cannons and tear gas, officials said.

So far, rioters have struck in at least 20 cities and towns across the Netherlands since Saturday when the nation was forced into its first curfew since World War II.

“We haven’t seen so much violence in 40 years,” Koen Simmers, of the police trade union NPB, said on television program Nieuwsuur.

Monday’s violence left a trail of looted shops and burned cars in cities including Rotterdam, The Hague and the capital, Amsterdam, as well as a town close to it, Haarlem, according to Agence France-Presse (AFP).

Around 1,850 fines were handed out for breaking curfew along with the close to 200 arrests, officials told national broadcaster NOS.

Dutch Prime Minister Mark Rutte condemned the “unacceptable” revolt, saying that most of the nation regarded it “with horror.”

A man is arrested by police during clashes in Rotterdam.EPA

“This has nothing to do with protesting or fighting for freedom. It is criminal violence and we will treat it as such,” he tweeted.

Finance Minister Wopke Hoekstra said the nation was “not going to capitulate to a few idiots,” according to NOS.

Justice Minister Ferd Grapperhaus dismissed rioters’ claims that the violence was sparked by the curfew, telling NOS that “you don’t have to raid a shop for that.”

John Jorritsma, the mayor of Eindhoven, one of the towns hit hardest by the riots, called the “completely anarchist” mobs the “scum of the earth.”

“They talk about freedom and dictatorship, but in the meantime they are demolishing the shops and the station here, setting fire to cars and police officers at the station,” he told NOS.

“We are on our way to civil war,” he warned.

A vehicle set on fire after a large group of rioters sought confrontation with the police in The Netherlands.Getty Images

The curfew — which forbids most but essential workers from leaving from 9 p.m. until 4:30 a.m. — came as the Netherlands was already under its toughest measures since the start of the pandemic. Bars and restaurants had been closed since October, and schools and non-essential shops shut since December.

It also came as new infections appeared to be dwindling — but was implemented over fears of the spread of the highly contagious mutations that started in the UK.

A large group of rioters seek confrontation with the police and pelts the police present with stones and fireworks on Beijerlandselaan in Rotterdam.EPA

Even before the curfew, bars and restaurants had been closed in October, and schools and non-essential shops shut since December.

As of Tuesday morning, the Netherlands had 966,194 confirmed coronavirus cases with 13,686 deaths — far less than many of its European neighbors, Johns Hopkins University data shows.