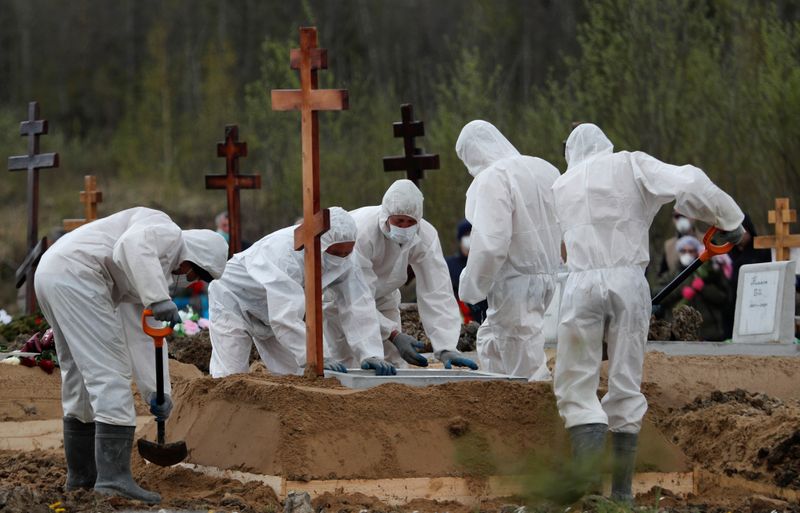 MOSCOW (Reuters) – The city of Moscow said on Wednesday it had ascribed the deaths of more than 60% of coronavirus patients in April to other causes as it defended what it said was the superior way it and Russia counted the number of people killed by the novel virus.

At 242,271, Russia has the second-highest number of confirmed cases in the world after the United States, something it attributes to a massive testing programme which it says has seen almost 6 million tests conducted.

But with 2,212 coronavirus deaths, Russia also has one of the world’s lowest mortality rates. Moscow, the epicentre of the country’s outbreak, accounts for 1,232 of those deaths.

The disparity between the high number of cases and the relatively low number of deaths has prompted Kremlin critics and various Western and Russian media outlets to question the veracity of Russia’s official death statistics.

Data published at the weekend showing that the total number of deaths registered in Moscow rose sharply in April compared with the same month last year and was also significantly higher than the number officially confirmed as having been caused by the new virus raised further suspicions.

Moscow’s Department of Health acknowledged in a statement on Wednesday that the number of deaths in April, 11,846, had been 1,841 higher than the same month last year and almost triple the number of people registered as having died of the virus.

But it flatly denied it had been dishonestly lowering the Russian capital’s coronavirus death toll. Tatyana Golikova, Russia’s health minister, has also denied any falsification of the statistics.

Unlike many other countries, Moscow’s department of health said it and Russia conducted post-mortem autopsies in 100% of deaths where coronavirus was suspected as the main cause.

“Therefore, post-mortem diagnoses and causes of death recorded in Moscow are ultimately extremely accurate, and mortality data is completely transparent,” it said.

“It’s impossible in other COVID-19 cases to name the cause of death. So, for example in over 60% of deaths the cause was clearly for different reasons such as vascular failures (such as heart attacks), stage 4 malignant diseases, leukaemia, systemic diseases which involve organ failure, and other incurable fatal diseases.”

It said 639 people in Moscow had died in April as a direct result of the coronavirus and its complications like pneumonia.

The Interfax news agency reported on Wednesday that the Russian Foreign Ministry wanted official retractions from two Western newspapers who had published what it said was incorrect information about the country’s coronavirus death rate.

One in 4 Coronavirus Sufferers Get ‘Covid’ Tongue, Some Have Burning Arms and Ft: Research