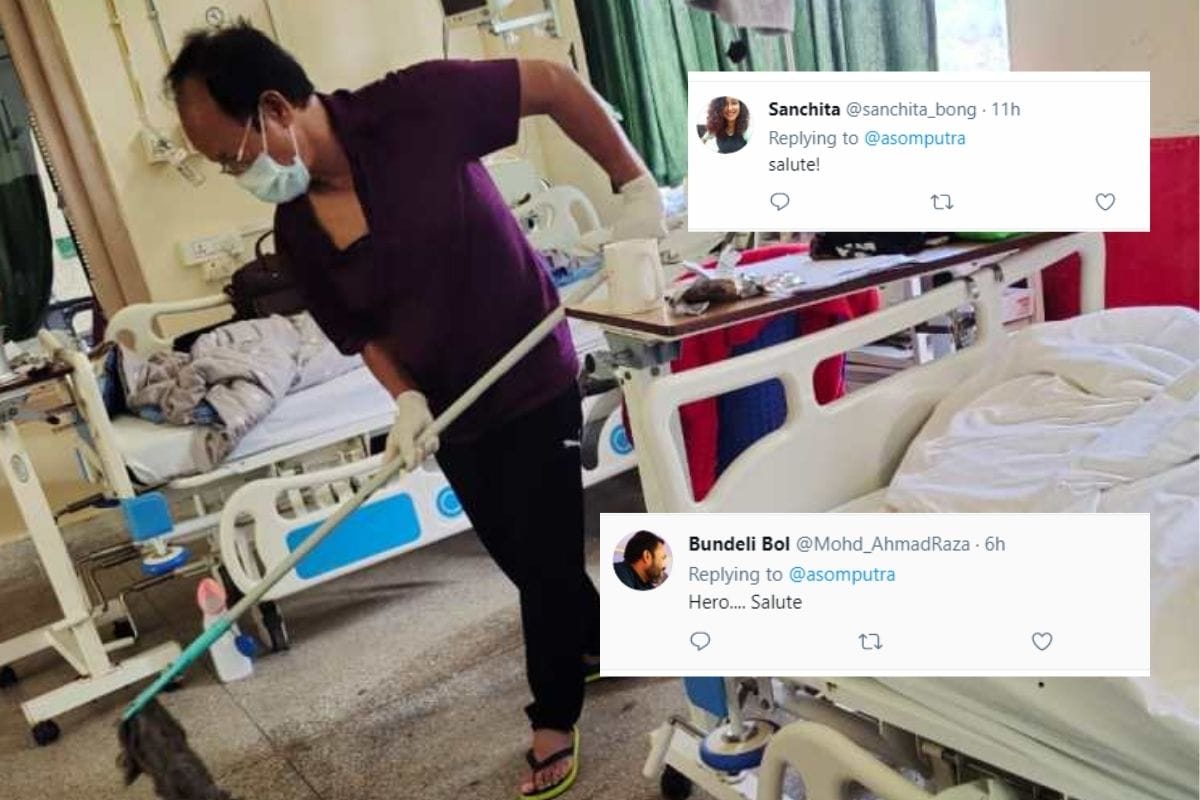 The deadly covid-19 second wave has been telling on India’s health infrastructure. However, often on social media, we see an incident where people do whatever little they can during such tiring times, to keep the boat sailing and helping each other out. Leading by example, Mizoram’s power and electricity department minister R Lalzirliana was on Friday seen mopping the floors of a hospital, where he is undergoing treatment for COVID-19 along with his wife and son. The minister’s action was not to embarrass medical staff or authorities but to set an example for others.

He said sweeping and mopping the floors are not new to him as he used to do such chores at his homes and other places. For a state which denounces VIP culture, Mizoram had witnessed several instances of ministers living as common men by performing household chores, travelling in public transport or motorbike, participating at community works and serving as a cook for community feast during festive season like Christmas and New year in the past.

“My motive in mopping the floors was not to embarrass the nurses or doctors but I want to educate and lead others by setting an example,” Lalzirliana told reporters. He said that he called the sweeper as their room was messy. But, the sweeper could not come and respond to his call, which prompted him to do the job himself, he said. “Sweeping, mopping the floors or performing household chores are no new jobs to me. I used to do it at home and other places when it is required to do so,” the minister said, adding that he did not keep himself above others for being a minister.

The incident was soon shared on Twitter by a journalist called Anupam Bordoloi, who wrote, “And there are politicians like R Lalzirliana, the power minister of #Mizoram, who was seen mopping the floor of the Covid ward where he is recovering after testing positive.”

No sooner the post went viral, netizens thronged to the comments section to hail the minister’s benevolence.

Who ever has seen you, I am sure, will never forget you in their life time. You are representative of God. May He bless you with best of health.— Ram Ikbal Rai (@RamIkbalRai) May 14, 2021

The minister had once cleaned and mopped the floor at Mizoram house in Delhi during his visit to the national capital in the past. The 71-year-old veteran politician and Mizo National Front (MNF) leader and his wife Lalthangmawii (59) were diagnosed with COVID-19 infection on May 11.

His son was also found infected with Covid-19 on May 8. The three of them were initially placed under home isolation.

They were shifted to the states lone dedicated COVID-19 hospital- Zoram Medical College (ZMC) on May 12 when Lalzirliana showed a sudden drop in oxygen level. The minister said that he started to develop mild symptoms since Thursday but he is out of danger and his oxygen level is stable now.

( with inputs from PTI )