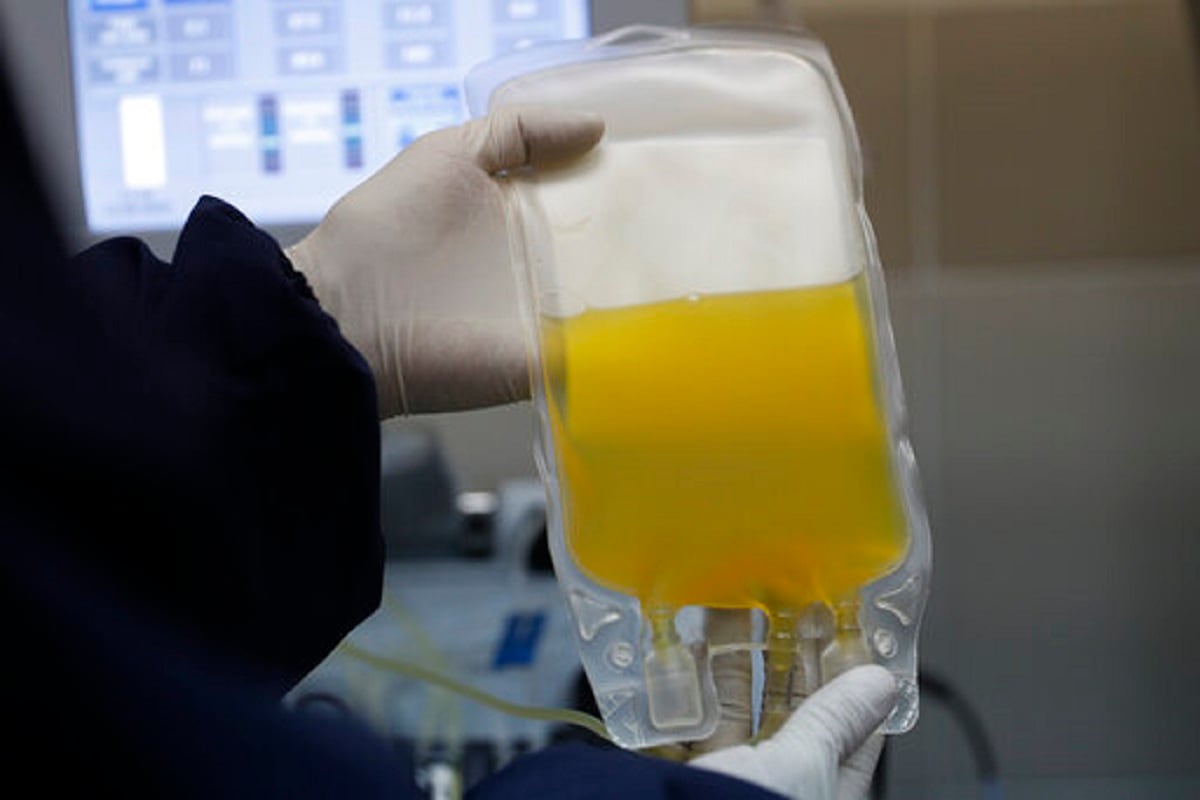 File photo of a doctor holding a bag of blood plasma donated by a COVID-19 survivor. (AP Photo/Juan Karita)

Crooks have been calling up families of Covid-19 patients, falsely assuring them of help. The families have alleged that these callers then accept advance payments and disappear, leaving the families in a lurch
News18.com
Last Updated: October 1, 2020, 4:19 PM IST


In what can be termed as a new low for the humanity, particularly in such times of duress, a ‘plasma donation’ fraud has surfaced in Karnataka’s Bengaluru. Pretending to be plasma donors, the culprits’ modus operandi involves calling up families of coronavirus positive patients, answering requests for plasma donation. The criminals then collect the money and disappear, leaving the families hapless, a report by Bangalore Mirror said.

Despite a multi-centric study funded by the Indian Council of Medical Research (ICMR) finding minimal use of convalescent plasma therapy in coronavirus-infected patients in reducing mortality or progression to severe COVID-19, several state governments had initially set up plasma therapy units and continue to do so.

The Clinical Management Protocols for COVID-19 issued by the Union Health Ministry on June 27 allowed use of convalescent plasma (Off label) for treating coronavirus-infected patients in moderate stage of the illness under “investigational therapies”. This authorisation has been paralleled by questionable practices such as calls for donors on social media, and the sale of CP on the black market with exorbitant price tags in India, the study said.

Coming back to a spate of such inhumane incidents, crooks have been calling up families of Covid-19 patients, falsely assuring them of help. The families have alleged that these callers then accept advance payments and disappear, leaving the families in a lurch.

Mohammed Ismail, who works as a volunteer for the Mercy Mission was quoted by the Mirror narrating an incident where a family who needed plasma was cheated out of Rs7,000. They reportedly got a call from an unidentified man who said he can help them with the plasma if they transferred the amount to him on GooglePay. The money was paid and the family waited for him to come donate blood, only to realise they had been duped.

Another incident took place at MS Ramaiah Hospital where a woman and her family, hailing from Kolar had tested positive for the coronavirus. The woman, identified as Sushma, had sent out requests through messages, asking for plasma donation for her father who was in a critical condition. Sushma was later approached by a man who said he was from the Rotary Club and sought Rs 7,000 from her in exchange for the plasma. She transferred the amount but when ever after hours she didnt get a response, she realised it was a fraud.

“Then I received several such calls from random numbers and realised the extent of the fraud. Since we are all in hospital, I have verbally filed a complaint with the local police,” Sushma was quoted by Mirror.

Volunteers advise the patients’ families to directly procure blood from a blood bank, for which they have to pay a minimal fee for the upkeep of the bank. The family of the patient is not ideally supposed to pay a donor, it is to be given out through the government. They add that although the government has said donors will be getting Rs 5,000 for plasma donation, there has been no guidelines framed for it so far. And having no such information makes it very easy for the gullible and desperate family members to fall for such frauds.

A senior police officer has said they will be taking cognizance of Sushma’s complaint and investigate the fraud.

Dr US Vishal Rao, Associate Dean, Centre for Academics and Research, HCG Cancer Centre, Bangalore has condemned the incidents and advised the families to source blood or plasma from the registered blood banks that are running in the city.

Dr Rao also warns that the blood donated has to be checked for anti-bodies before using it for patients, or else the treatment does not serve any purpose.