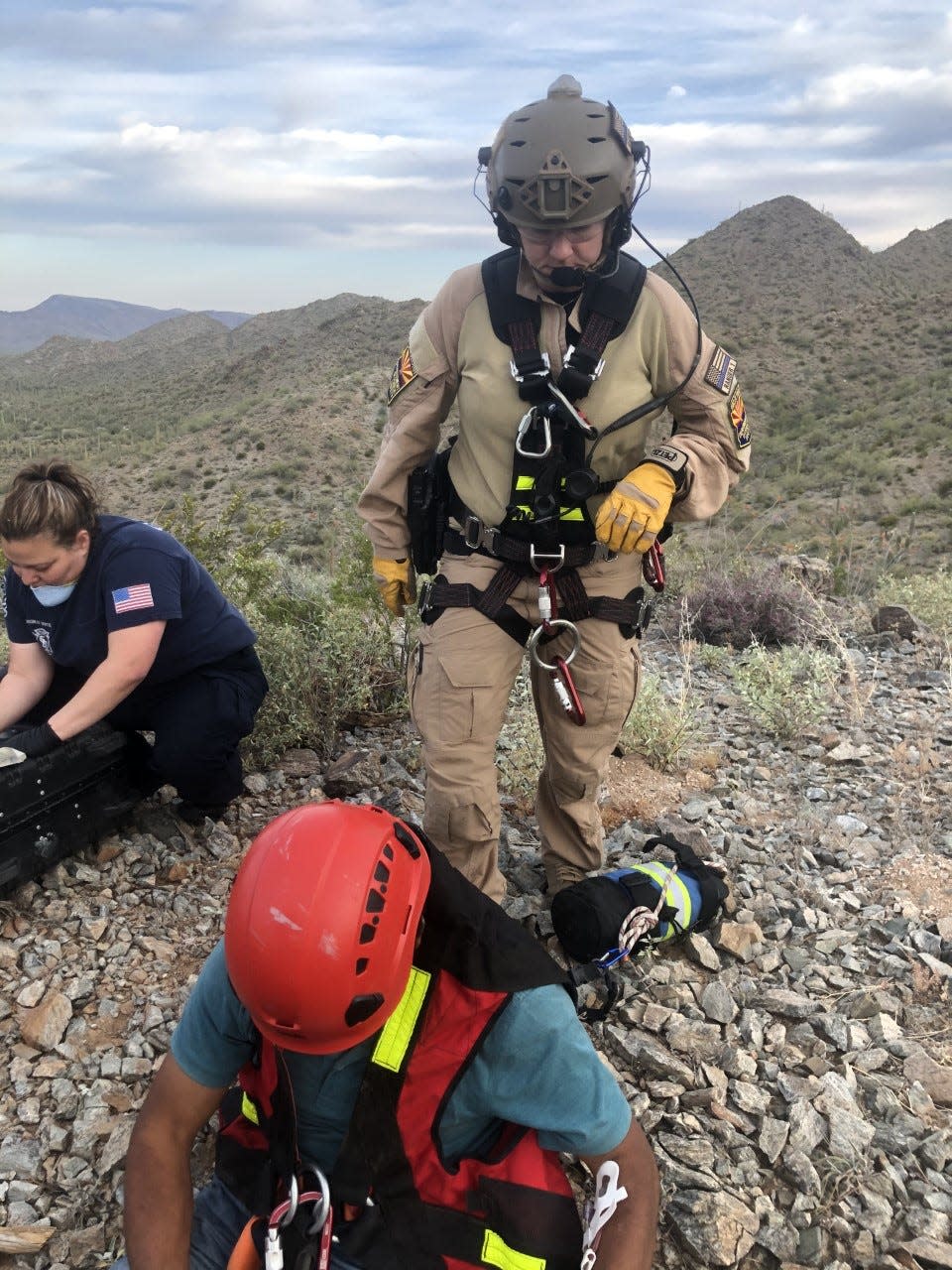 PHOENIX – The number of migrants rescued by U.S. border agents this year in Arizona’s desert wilderness has surpassed the total for 2019, according to U.S. Border Patrol officials.

Rescues spiked despite restrictions at the U.S.-Mexican border during the COVID-19 pandemic, and three of the hottest months remain in the fiscal year.

The number of migrant rescues in Arizona goes up seasonally starting around March, when temperatures along the desert border begin to reach triple digits and remain that way until about September.

Thursday, the National Weather Service issued an excessive heat warning for southern Arizona until Monday. Temperatures along the border are forecast to reach up to 121 degrees in Yuma County and up to 118 degrees in western Pima County, leaving border agents on high alert.

“Many times, they (migrants) don’t carry enough water to survive the journey, so they’re wandering through the desert because of how large it is, and they may not necessarily know where to go, or they get lost,” said Agent Jose Garibay, spokesman for the Border Patrol’s Yuma Sector. “They could be wandering the desert for days.”

“Not only are they lost in 118-, 120-degree weather, but now the agents themselves are having to go out there and look for these individuals as well, so … it’s also dangerous for the agents,” he said.

The Border Patrol reported that agents in Arizona have rescued at least 1,054 people this fiscal year, which began Oct. 1 and ends Sept. 30. The majority of rescues take place during the warmer months.

This year’s spike corresponds to an overall increase in migrant apprehensions at the U.S.-Mexican border since March. That’s when the U.S. government began implementing restrictions to contain the spread of COVID-19, including  expelling most apprehended migrants back to Mexico.

Apprehensions have climbed after bottoming out in April, the first full month with the border restrictions in place because of the coronavirus, according to data from U.S. Customs and Border Protection, which includes the Border Patrol.

The number of migrants processed along Arizona’s border with Mexico has risen over the past three months. Apprehensions rose 47% from May to 5,604 in June, according to CBP’s numbers.

Enforcement of Arizona’s 372-mile-long border with Mexico is split between two Border Patrol sectors. The Tucson Sector covers the eastern two-thirds and accounts for the overwhelming majority of migrant rescues. The Yuma Sector covers the remaining third to the west.

Though rescues are up along the entire Arizona border, a large number of them are concentrated in the West Desert, the name border agents use to describe a vast area in western Pima County that includes some of the driest, hottest and most remote areas in the state.

Each year during the warmer months, the Tucson Sector surges staff and resources to this part of the border in anticipation of a spike in calls. It has 34 rescue beacons spread throughout the area that migrants can activate when in distress.

The Yuma Sector records fewer rescues each year, but agents noticed a significant increase in the past three months.

They’ve carried out 80 rescues this year. By this point in 2019, agents had recorded 64. Most of the rescues in the Yuma Sector are concentrated along the remote, eastern portions of the sector, adjoining the West Desert.

“With everything still getting hotter, and it’s still not being the hottest time of the year so far, we do definitely foresee more rescues continuing to be made,” Garibay said.

Critics such as the humanitarian aid organization No More Deaths argued that the Border Patrol’s policies are responsible not just for the rescues but also the deaths of migrants at the border. They point to the agency’s “prevention through deterrence” strategy in 1994 for pushing migrants and smugglers to more remote and rugged areas of the border.

The US border enforcement strategy of “prevention through deterrence” is DESIGNED to cause people to suffer and die.

So when Border Patrol “rescues” someone it’s “like a ship captain pushing everybody in the water and then throwing in a few life jackets.” https://t.co/86o2ei7u63

Border Patrol officials described multiple rescues along the Arizona border in the past three months.

The most recent example, disclosed Thursday, described two rescues earlier in the week. Monday, agents on patrol at the Tohono O’odham Nation encountered and treated an unconscious 20-year-old migrant from Guatemala for severe dehydration.

The next day, agents found two migrants wandering in the desert near Tombstone in Cochise County. The man was fine, but a 26-year-old woman traveling with him drifted in and out of consciousness, the Border Patrol said.

In both instances, medical crews transported the two unconscious migrants to a nearby hospital via helicopter, often the easiest and fastest method of transportation, especially in remote areas of the border.

On March 21, the U.S. Department of Homeland Security began expelling migrants apprehended at the border to their countries of origin, rather than processing them, to avoid COVID-19 outbreaks at facilities.

Most expulsions, under the authority of an emergency order the U.S. Centers for Disease Control and Prevention issued to prevent the spread of COVID-19 under Title 42, happen within two hours, according to the Border Patrol.

Hernandez said the first priority whenever agents encounter migrants in distress or in need of rescue is to get them medical attention, if needed.

“We’re going to make sure they get the treatment that they need. Once they’re given a clean bill of health by medical professionals, then we can put them back in the immigration system, and perhaps they may be candidates for the Title 42 expulsion,” he said.

The Arizona border remains one of the deadliest corridors for migrants attempting to enter the USA illegally.

The Pima County Office of the Medical Examiner tracks the number of human remains recovered each year from the desert of the Border Patrol’s Tucson Sector.

In 2019, the office reported the recovery of the remains of 153 “undocumented border crossers,” the highest number in the past five years, although the number indicates when the remains were found, not when the person died.

This year, 96 sets of human remains have been recovered at the Arizona border, according to a map of migrant mortality maintained by the aid group Humane Borders, using data from medical examiners.

Of that total, 82 sets of remains were recovered in Pima County, most of them in the West Desert where the Tucson Sector said the majority of migrant rescues are concentrated.

No More Deaths drops off gallons of water for migrants trekking through the desert, especially in western Pima County.

Today the desert was so hot I drank 3 full Nalgene bottles of water & electrolytes without having to pee… 😕 But that’s why every @NoMoreDeaths gallon counts. We put out of 100 gallons. #SafePassage, no one should have to walk this desert in this sun. 🌵🖤 pic.twitter.com/SoiQSslsVA

Large sections of the Arizona-Mexico border have become construction sites as crews replace outdated fencing or vehicle barriers with 30-foot steel bollards, including in rugged desert areas in southwestern Arizona, where most of the rescues take place.

Construction crews finished installing fencing along 31 miles in Yuma County. An additional 212 miles of fencing is under construction, according to Customs and Border Protection: 137 miles in the Tucson Sector and 75 miles in the Yuma Sector.

Border Patrol officials said they haven’t seen a correlation between construction sites and the locations where they have encountered migrants in need of rescue.

All U.S. adults eligible for COVID-19 vaccination on April 19

The US and Sweden may have approached the coronavirus differently, but they could both end up with high death rates