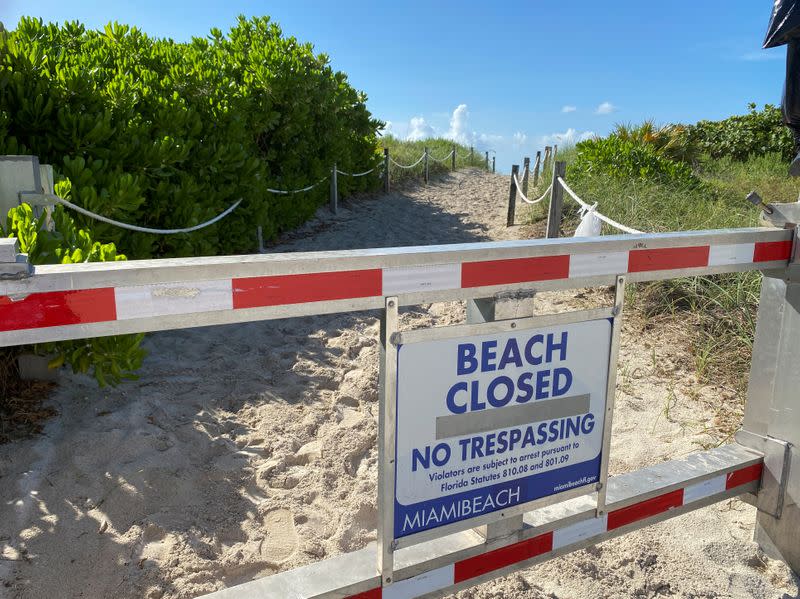 (Reuters) – The number of coronavirus cases in Florida jumped again on Friday as the mayor of the state’s biggest city imposed a nightly curfew and rolled backed the reopening of entertainment venues to try to stem one of the most alarming coronavirus surges in the United States.

Miami-Dade County Mayor Carlos Gimenez announced an indefinite nightly curfew from 10 p.m. to 6 a.m. as the July Fourth holiday weekend began and halted the reopenings of venues, such as casinos and theaters that had been set for Friday.

“Let’s celebrate Independence Day by respecting one another’s right to life, liberty and happiness,” Gimenez said in a video on Friday, citing the U.S. Declaration of Independence adopted on July 4, 1776.

Coronavirus cases are rising in 37 of the 50 U.S. states including Florida which had 9,488 new cases on Friday, according to the state health department, after more than 10,000 new cases the previous day.

Thursday’s figure marked Florida’s largest daily spike so far and put it on a level that exceeded single-day tallies from any European country at the height of the outbreak there.

Earlier this week, Miami-Dade and neighboring Broward County, the state’s two most populous counties, required residents to wear face coverings in public to guard against the spread of inspection.

Nearly a quarter of the world’s known deaths from the coronavirus have occurred in the United States, where almost 129,000 people have died. The United States reported more than 55,000 new COVID-19 cases on Thursday, a new daily global record for the pandemic.

TRUMP UNDER THE MICROSCOPE

The surge has put President Donald Trump’s handling of the coronavirus crisis under the microscope and led several governors to halt plans to reopen their states after strict lockdowns.

Trump again hailed the country’s coronavirus testing, saying it was the reason the number of confirmed U.S. infections was so high compared to that of other countries.

“There is a rise in Coronavirus cases because our testing is so massive and so good, far bigger and better than any other country,” Trump wrote in a tweet late on Thursday. He described U.S. levels of testing as “great news.”

Health experts say that is not the whole story.

The percentage of tests coming back positive in Florida has risen to 16%, up from 4% a month ago, according to a Reuters analysis. The World Health Organization says a rate over 5% is concerning.

Trump will begin his July Fourth celebrations with a trip to Mount Rushmore on Friday despite concerns about gathering a large crowd during the pandemic and criticism from Native Americans about the visit.

Trump will view a fireworks display with thousands of people at the South Dakota landmark, which depicts the images of four U.S. presidents in stone.

Much of the coronavirus spike is happening in Sunbelt states like Florida and Arizona, where the number of cases rose by 4,433 on Friday.

Adult intensive care unit beds in use by all Arizona patients was at 91% capacity on Thursday and COVID-19 current hospitalizations rose to a record high of 3,013, the state health department said.

In Alabama, coronavirus cases increased by 1,754 on Friday, the state’s highest single-day increase since the pandemic started.

In Michigan, an increasing number of younger individuals are being hospitalized with COVID-19, and youths are testing constructive on the highest fee of any age group