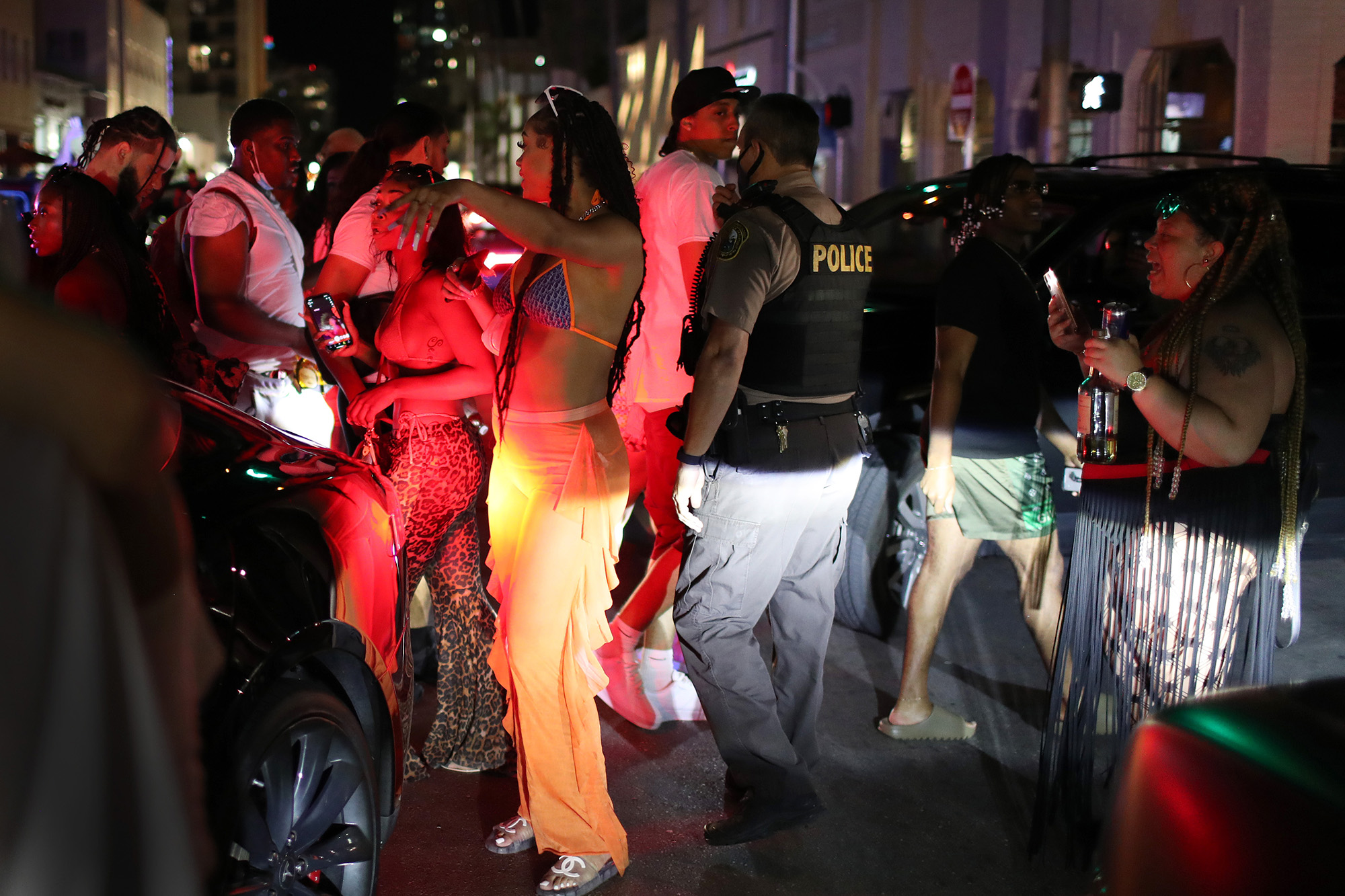 Miami has extended its highly unusual emergency measures — including 8 p.m.-to-6 a.m. curfews and causeway closures – through April 12 to quell the crowds of unruly spring breakers that have flocked to the party city in defiance of COVID-19 safety rules, according to reports.

The Miami Beach City Commission voted to extend the curfew  during a last-minute emergency meeting Sunday — a day after interim City Manager Raul Aguila declared a state of emergency, the Miami Herald reported.

More than 1,000 partiers have been arrested since February, with more than half from out of state, Aguila said. He added that many are coming “to engage in lawlessness and an ‘anything goes’ party attitude.”

Officials noted that the throng of spring breakers weren’t the usual college crowd — but adults looking to let loose in one of the few states fully open during the pandemic.

People walk past Miami Beach police after they arrested a person along Ocean Drive on March 21, 2021 in Miami Beach, Florida. Joe Raedle/Getty Images

Aguila noted that the crowds weren’t eating at restaurants or patronizing businesses generating badly needed tourism dollars, but were merely congregating by the thousands in the street.

A women leaves the area as an 8pm curfew goes into effect on March 21, 2021 in Miami Beach, Florida. Joe Raedle/Getty Images

Over the weekend, police trying to enforce the unorthodox curfew used pepper balls to curb the crowds — sparking a stampede.

The 8 p.m. curfew in South Beach’s entertainment district and the 10 p.m. closure of the eastbound lanes of the MacArthur, Julia Tuttle and Venetian causeways will remain in effect Thursday through Sunday for the rest of spring break, according to the newspaper.

People gather while exiting the area as an 8 p.m. curfew goes into effect on March 21, 2021 in Miami Beach, Florida.Joe Raedle/Getty Images

Aguila, who enacted the strict measures Saturday, needed the commission’s support to extend them for more than the 72-hour period allowed under the city’s code.

He said the measures will seek to “contain the overwhelming crowd of visitors and the potential for violence, disruption and damage to property” during the chaos unleashed by the out-of-control spring breakers.

South Beach has been beset with brawls, stampedes and police confrontations involving the use of pepper balls. At least five police officers have been hurt on the job, officials said.

“These aren’t your typical spring breakers,” Aguila said, according to the Miami Herald.

Law enforcement officers from at least four other agencies — along with SWAT teams — were added to help contain the masses, but it wasn’t enough.

Officers wearing bulletproof vests unleashed pepper spray balls Saturday night into a defiant, but mostly nonviolent crowd, refusing to submit to the curfew that had only been enacted four hours earlier.

A man partying on top of a car in Miami Beach.Joe Raedle/Getty Images

Some people responded by jumping on top of cars, twerking and throwing money into the air.

A group of vehicles blocked the street “and basically had an impromptu street party,” he said.

But by Thursday, the crowds were growing and brawls were breaking out, setting off dangerous stampedes of people running for safety.

“We couldn’t go on any longer,” Clements said during Sunday’s emergency meeting, defending the city’s curfew. “I think this was the right decision.”

Miami Beach Mayor Dan Gelber said he has trouble sleeping at night amid the pandemonium.

“When hundreds of people are running through the streets panicked, you realize that’s not something that a police force can control,” he said during the commission meeting Sunday.

An officer patrols the area amid spring break.Joe Raedle/Getty Images

Local officials have struggled to enforce the coronavirus ordinances in Florida, where there are no statewide mask rules, limits on capacity or other such restrictions, courtesy of Republican Gov. Ron DeSantis’ pro-business stance.

“I think there are very few places that have been open as our state has been open,” Gelber said. “We’re in the middle of a pandemic. The virus is still very present in our community. We have 1,000 infections a day on most days.”

Meanwhile, authorities in Miami Beach also were facing allegations of racism as they used force to clear out many people of color from the overrun entertainment district.

“I think when they’re young black people [on South Beach], the response is, ‘Oh my God, we have to do something,’” he added.

Glendon Hall, chairman of Miami Beach’s Black Affairs Advisory Committee, said he was on Ocean Drive helping “goodwill ambassadors” guide the crowd off the street but did not see what led police to use pepper balls.

The ambassadors are city workers who give out masks and help tourists.

Before the dispersal, the crowd was peaceful, he said, but tensions spiked when a Coral Gables SWAT truck drove nearby.

The pepper-ball shots sparked a panic, and the crowd rushed down the street.

“The truck showed up and nobody knew why the truck was there,” said Hall, who took cover behind a tree. “When we tried to calm things down, that hyped things up.”

People clearing the city amid the curfew in Miami Beach.Joe Raedle/Getty Images

DeAnne Connolly Graham, a member of the Black Affairs Advisory Committee, told the Miami Herald that “we have to realize that we are definitely fighting an undertone of racism” among the city’s largely white resident base, some of whom have called black spring breakers “thugs” on social media.

Johnson said the use of force reminded him of how Miami police handled Black Lives Matter protesters over the summer.

A Miami Dade police officer directs people out of the area as an 8pm curfew goes into effect on March 21, 2021 in Miami Beach, Florida. Joe Raedle/Getty Images

One person went as far as to recommend someone “turn on the hose” to disperse crowds, she said.

“They dehumanize us,” Torres said.

People seen walking in the city at night.Joe Raedle/Getty Images

He said police only fired tear gas as the crowd began to surge toward the officers, adding that they wouldn’t fire the pepper balls simply to break up a crowd of people.

“I think officers felt threatened at the time,” he told the paper. “There has to be an element there of either the crowd fighting or coming at officers.”

Over the weekend, police trying to enforce the unorthodox curfew used pepper balls to curb the crowds — sparking a stampede.

Not less than 12,000 mink useless as coronavirus spreads amongst fur farms in Utah and Wisconsin