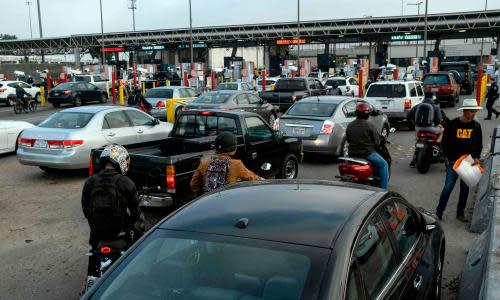 As he campaigned for the presidency, Donald Trump promised to build a “big beautiful wall” along the US-Mexico border, claiming it would keep migrants out of the country and stop everything from drugs to disease.

But with Covid-19 cases surging on both sides of the frontier, towns in northern Mexico are pleading to restrict cross-border movement – this time to stop tourists and travellers bringing in coronavirus from the US.

Over the weekend, townspeople in Sonoyta on the Arizona border used their own vehicles to block the road leading to Puerto Peñasco, a beach town on the Sea of Cortés popular with US tourists – and they plan to repeat the process this week.

“We invite US tourists not to visit Mexico,” Sonoyta’s mayor, José Ramos Arzate, said in a statement. “We agreed on this to safeguard the health of our community in the face of an accelerated rate of Covid-19 contagion in the neighboring state of Arizona.”

Coronavirus cases have mushroomed in several US border states, including Arizona and Texas, which both botched attempts at reopening. Despite the data showing a runaway growth in case figures in the US, Trump has reportedly sought to blame Mexico for the crisis and erroneously claimed Tijuana was “heavily infected with covid”.

Trump welcomes his Mexican counterpart, Andrés Manuel López Obrador, at the White House on Wednesday in a meeting meant to celebrate the newly implemented USMCA, but will inevitably include talks on the pandemic.

Related: Mexico’s president pushes ahead with Trump trip – but is it worth the risk?

Like Trump, López Obrador has shrugged off advice on mask-wearing and downplayed the coronavirus, even as his country struggles to deal with the outbreak.

And like the US, Mexico has not rolled out a widespread testing program, prompting widespread speculation that the scale of the pandemic has been dramatically underreported. Amlo took his first coronavirus test only this week, amid preparations for his US visit.

But Mexican states near the border are increasingly coming to see US tourists and the constant cross-border traffic as a hindrance to containment efforts, and have asked the Mexican federal government to impose restrictions.

“It’s so important to implement the necessary measures to protect the health of Sonorans. And one of them at this time has to be reducing the border crossings from the United States to Mexico,” Sonora’s health secretary, Enrique Clausen, said earlier this month.

Over the Fourth of July weekend, Sonora set up checkpoints to screen people entering from the US, turning back tourists and others whose trips were deemed not be “essential travel”. An exception was made for the border crossing closest to Puerto Peñasco, which prompted residents along the route to block the road near the border, Arizona media reported.

Other states have also set up health control stations. A “sanitary filter” in Mexicali caused delays of more than eight hours in 40C (104F) heat across the border in Calexico, California. Officials seized more than 2,000 cans of beer in the process, according to local media, as parts of Mexico have imposed dry laws during the pandemic.

The US ambassador to Mexico, Christopher Landau, has urged people to stay put, saying in a US Independence Day message: “In recent weeks, hundreds of thousands of people have crossed the land border every day and 90% of them are US citizens or green-card holders. If this traffic doesn’t slow, there will be an increase, not a decrease, in travel restrictions.”

Landau previously urged Mexican officials to speed the opening of maquiladoras in the border region, saying continental supply chains could not be stopped indefinitely. The US government has also sent migrants back to Mexico, including people with Covid-19.

The US-Mexico border is to remain closed to all but “essential trade and travel” until 21 July.

COVID-19 circumstances and deaths are beginning to rise once more. How apprehensive ought to we be?