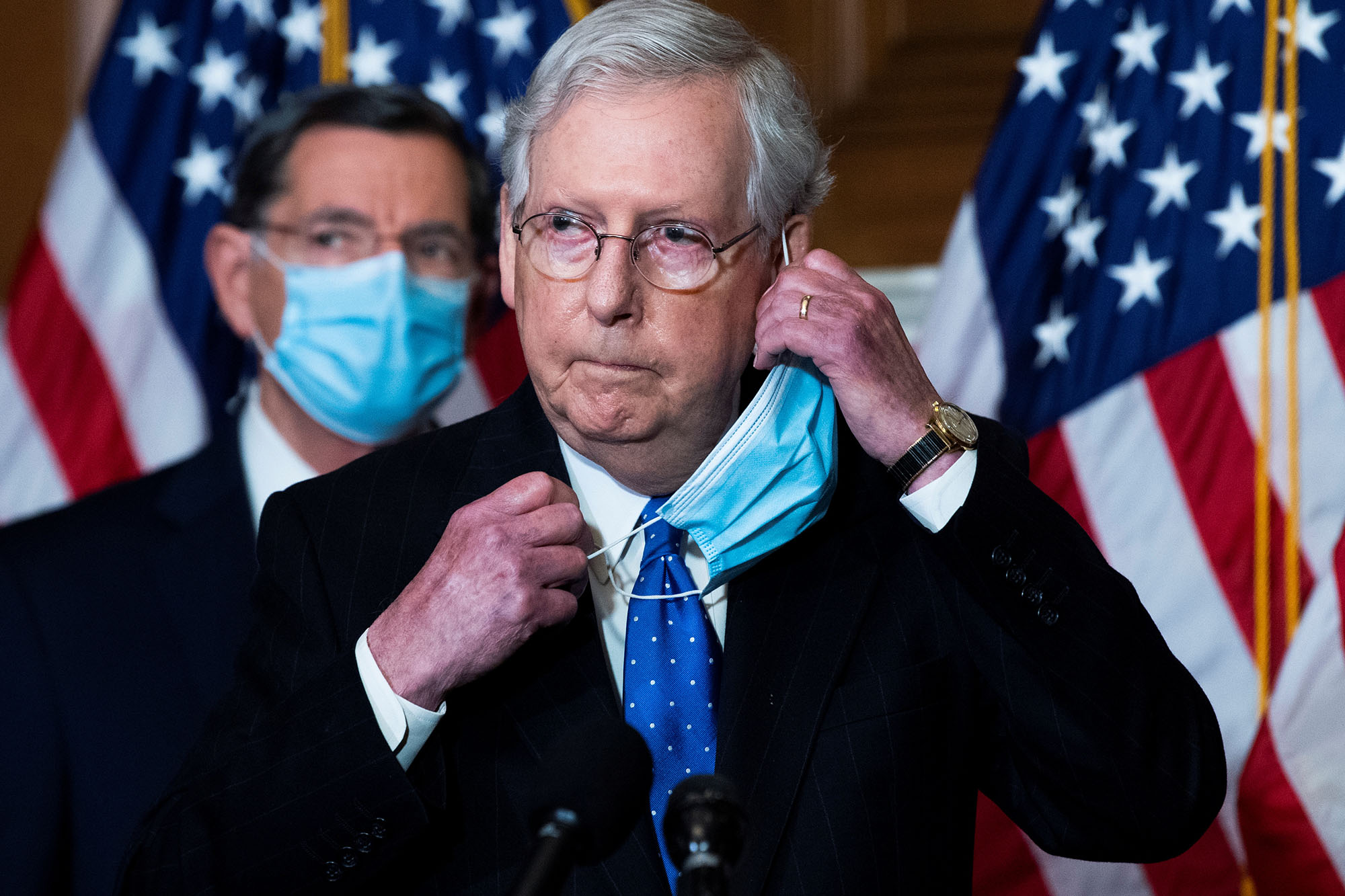 Senate Majority Leader Mitch McConnell on Monday said he expects there to be a stop-gap one-week government funding bill that passes before Friday — pushing off for at least another week any potential COVID-19 relief bill.

His remarks appear to dash a Senate Republican colleague’s prediction that McConnell would get behind a $908 billion bipartisan proposal that President Trump reportedly indicated he would sign.

“For government funding, as I’ve said for weeks, it’s my hope that our committees’ work will bear fruit and a full-year funding package will come to the floor in both chambers,” he said.

“I anticipate that the Senate will take up a one week extension this week so the government does not close on Dec. 11 and work can continue through the end of next week. The nation needs our Democratic colleagues to resist the temptation to play brinksmanship with long-settled policy issues or push poison pill riders.”

McConnell has forecast COVID-19 relief as being included in a larger funding deal.

“We senators are no strangers to your end-of-year drama,” McConnell said. “But this time the stakes are far higher. We’re up against another even steeper surge of COVID-19 than we saw back in the spring. Workers and small businesses are once again struggling to make ends meet as states and localities step up precautions.”

McConnell said that it was the fault of Democrats for not previously embracing his proposal for “targeted” relief that would have funded unemployment benefits, forgivable small business loans and COVID-19 healthcare.

“Republicans have been saying for months that [House] Speaker [Nancy] Pelosi and the Democratic leader should let Congress get outcomes in all of the places where we already agree, rather than holding everything hostage over their most controversial partisan demands,” he said.

“A targeted compromise on the most urgent items would pass by a massive bipartisan margin. We could easily put together a whole slew of common sense policies, including those three and other things like legal protections at universities.”

McConnell said “everyone knows why this hasn’t happened. There’s one reason, the Speaker of the House and the Democratic leader have spent the month tying the most bipartisan common sense policy to their most controversial requests, saying the country can’t get the former unless it gets the latter.”

Pelosi (D-Calif.) and Senate Minority Leader Chuck Schumer (D-NY) last week endorsed the $908 billion bipartisan proposal, dropping their months-long insistence on a COVID-19 deal costing between $2.4 trillion and $3.4 trillion, including up to $1 trillion for state and local governments, which Republicans largely oppose.

Louisiana Republican Sen. Bill Cassidy on Sunday predicted that McConnell would also get behind the bipartisan plan.

“President Trump has indicated that he would sign a $908 billion package — there’s only one $908 billion package out there and it’s ours,” Cassidy said in a Fox News interview. “The pain of the American people is driving this and I’m optimistic that both of those leaders will come on board.”

The $908 billion proposal would partially revive at $300 per week a federal unemployment supplement, down from $600 a week before it expired, and would add $288 billion in new small-business Paycheck Protection Program forgivable loans.

The bipartisan plan also calls for $45 billion for airlines and struggling mass-transit systems, $160 billion for state and local governments and $16 billion for COVID-19 testing and vaccine distribution. It has $82 billion for schools, $10 billion for the US Postal Service and $5 billion for opioid addiction treatment.

The proposal does not contain another round of $1,200 stimulus checks or McConnell’s request for liability protections for businesses.

Don't Miss it On COVID-19 vaccine, ‘get as many pictures in arms as potential, immediately’: ex-FDA chief Q&A
Up Next The White Home coronavirus response chief mentioned the winter surge would be the worst occasion in US historical past, ‘not simply the worst public well being occasion’