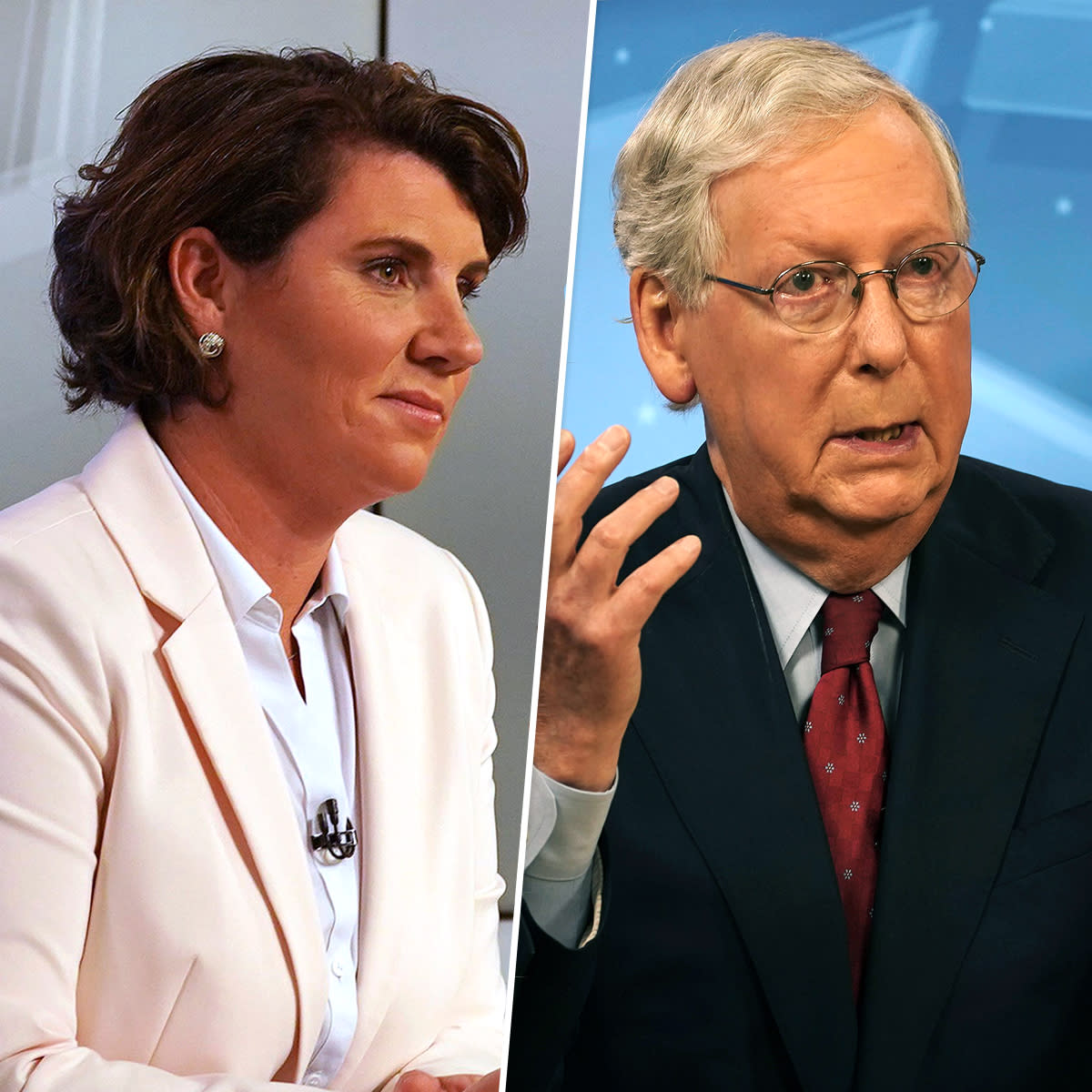 McGrath, a retired Marine combat pilot, was aggressive from the outset in blaming the senator for the lack of another round of federal relief for a pandemic-battered economy, calling it a “dereliction of duty.” McConnell blamed congressional Democrats for the stalemated negotiations.

In a biting exchange later, McConnell touted his top Senate leadership post as a valuable asset for Kentucky and fired back at McGrath’s constant attacks on his Senate record, saying: “I think her entire campaign is: She’s a Marine, she’s a mom and I’ve been there too long.”

McGrath responded: “Senator, you’ve been there for 36 years. How’s it looking, Kentucky?” She pointed to the state’s stubbornly high cancer and diabetes rates along with lack of broadband access and well-paying jobs in some parts of the state.

McConnell countered that he’s delivered billions of dollars in federal money that McGrath couldn’t replicate if she replaces him and takes her place as a freshman on the “back bench” in the Senate.

The debate offered McGrath her best chance for a breakthrough against McConnell, who has long dominated Kentucky’s political landscape and has consistently led in polling as he seeks a seventh term. It was their first and potentially only faceoff of the campaign. In-person early voting begins Tuesday, and many Kentuckians are already filling out absentee ballots.

The debate comes at a crucial time for McConnell, who is running his own race while also focused on keeping his job as majority leader as the GOP struggles to retain control of the Senate.

When asked about the federal response to the coronavirus outbreak, McGrath gave President Donald Trump and Congress an “F,” before turning her attention to McConnell.

“His one job is to help America through this crisis right now in passing legislation to keep our economy afloat so that people can make ends meet,” she said. “And instead of doing that, he is trying to ram through a Supreme Court nominee right now, instead of negotiating, which is what he should have been doing all summer long to make that happen.”

For his part, McConnell said he offered another coronavirus relief bill about a month ago that stalled when it drew no Democratic support in the Senate.

“I think they don’t want a solution prior to the election,” he said of congressional Democrats.

The Kentucky rivals delved into the Supreme Court nomination battle under way in Washington. The nominee, Amy Coney Barrett, presented her approach to the law as conservative and fair on Monday at the start of the confirmation hearings, while angry Democrats, powerless to stop her, cast her as a threat to Americans’ health care coverage during the pandemic.

McGrath said there should be no vote on filling a Supreme Court vacancy so close to the election, and criticized what she saw as McConnell’s inconsistency on the matter. Four years ago, McConnell blocked then-President Barack Obama’s choice of Judge Merrick Garland to fill another Supreme Court vacancy in a presidential election year.

McConnell, who is leading the fast-track confirmation process for Barrett, called her an “extraordinary nominee” and an “accomplished scholar.”

The hourlong debate was aired on Gray Television’s Kentucky-based stations. It came near the end of a big-spending campaign that has been waged in distance, with the two sparring in hard-hitting TV ads.

The rivals debated at WKYT, and the Lexington station took a number of precautions in response to the coronavirus. Kentucky is in the midst of another spike of COVID-19 cases.

Don't Miss it ‘Unethical’ to unfold COVID-19 for sake of herd immunity: WHO
Up Next BAME coronavirus deaths: What's the chance for ethnic minorities? – BBC Information

Security guards patrol on a street outside of a shopping mall complex in Beijing – NICOLAS ASFOURI , AFP Europe…

After school Thursday, 12-year-old Abhinav pushed up his T-shirt sleeve and looked down as a needle pierced his left shoulder.…