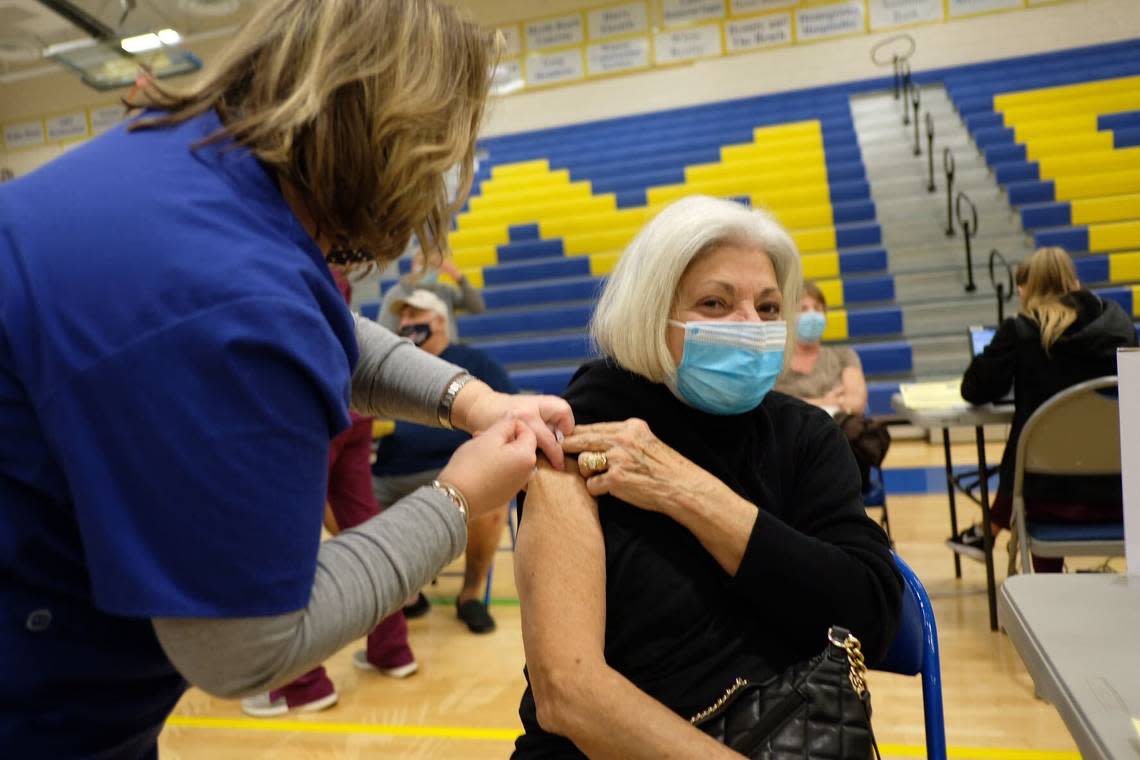 Vivian Gerfo left her house at 4:30 a.m. Saturday morning to be first in line for a mass vaccination event at the North Myrtle Beach High School.

Gerfo and her husband, both over 70, waited in their car while a miles-long line formed behind them. As the sun began to rise, a team of volunteers and McLeod hospital employees waved the cars forward to pick up vaccine vouchers.

McLeod Health Seacoast organized the event which drew thousands of seniors hoping to get their first dose of the COVID-19 vaccine. The event was organized first-come, first-serve style and was aimed at helping seniors who have struggled with making appointments on the computer or over the phone.

Gerfo is one of those seniors.

“I filled out so many applications, made so many long phone calls and no response, and then we heard about this,” she said. “I feel safer already.”

By 8 a.m. the line of cars backed up to Highway 31 to the west and to the swing bridge over the Intracoastal Waterway to the east. An hour later, Gerfo was walking into the school’s gym to start the vaccination process.

“I’m so grateful,” she told the nurse administering the shot. McLeod Health planned to give about 1,700 people their first dose of the Pfizer vaccine Saturday. This is one of the largest mass vaccination events hosted in Horry County so far, and it began with almost no hiccups.

“There’s a lot of planning in a short amount of time,” said Scott Montgomery, an administrator with McLeod. That planning included coordinating with police, traffic control, the high school and the state. The amount of vaccine the hospital receives changes weekly, and it tries to give it all out before the next shipment comes in.

No appointment needed at Saturday’s event

Across the country, football stadiums, government buildings and high school gyms are being used as mass vaccination sites as hospitals work to get as many people vaccinated as possible. Saturday’s first-come, first-serve event in North Myrtle Beach was one of the few announced to the public in the region.

Inside the gym, dozens of nurses sat at tables giving shots to seniors, while a separate team of health care workers loaded syringes with vaccine. Behind the tables, socially distant chairs were set up to monitor patients after they got their shot.

The coronavirus has infected 30,125 people and killed 479 in Horry County as of Feb. 3, according to data from the South Carolina Department of Health and Environmental Control.

William “Chuck” Howie and his wife Carol were one of the first people to get vaccinated Saturday. They waited in line four hours before their 9 a.m. shots.

“We are at that age where the virus would be pretty tough on us,” said William, who is 71 years old.

They are looking forward to their second doses so they can spend time with their grandchildren again without feeling unsafe.

Joan Gause was one of a handful of Black patients getting shots Saturday. Black Americans are getting vaccinated at a much lower rate than white Americans. Gause was just happy to finally have a shot after trying for months to make appointments over the phone.

“This is great,” she said. “Eventually we’ll get back to half-way normal.”

Don't Miss it Coronavirus instances are falling within the US however specialists say it is not from the COVID vaccine, but
Up Next Biden says minimal wage improve appears prefer it’s not ‘going to outlive’ as a part of COVID-19 reduction bundle