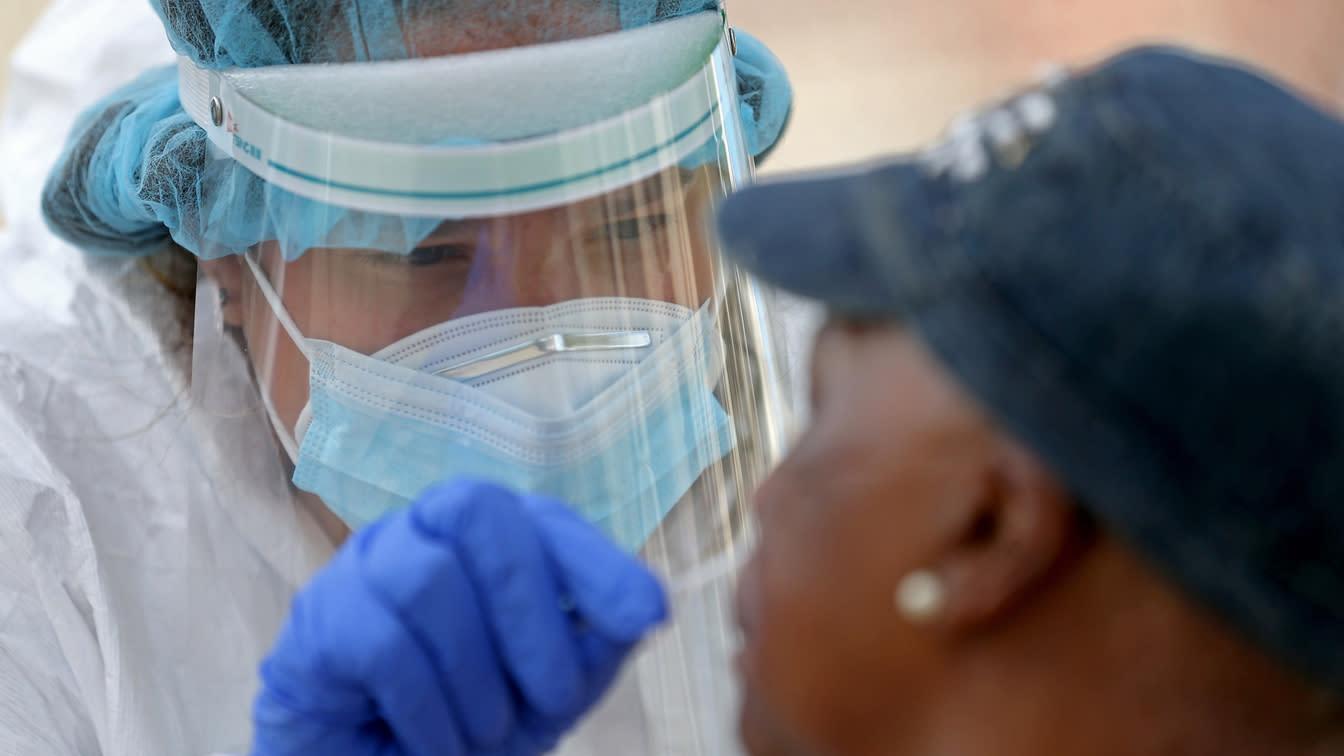 To stop its raging coronavirus outbreak, which is currently spreading at a rate of about 60,000 new cases per day, the United States can do one of two things.

Either it can lock everybody down completely — or it can test everybody constantly.

The lockdown approach works because if infected people can’t get close to noninfected people, the chain of transmission is broken, even if we don’t know who is actually infected.

The testing approach works because it lets us identify infected people and isolate them from noninfected people without forcing everybody else to stay home.

The problem with lockdowns, however, is that after enduring a big national one this spring — and suffering the economic fallout with little to show for it — Americans have zero appetite for even targeted, localized sequels.

Unfortunately, the latest data now shows that testing is falling across much of the U.S. According to Johns Hopkins University, the average number of COVID-19 tests conducted per 1,000 people declined in the past week in 30 states — more than half the country. Nationally, the average number of daily tests dropped by 8.75 percent during the same period, from 822,470 on July 29 to 750,517 on Aug. 4.

And while a few of the states where testing has slipped have been affected by Hurricane Isaias, most haven’t. Most are states — 22 in all — where a high percentage of COVID-19 tests are still coming back positive, which indicates they’re not casting a wide enough net to track (and control) their outbreaks.

In short, although President Trump is correct that the U.S. has conducted more tests than any other country, it’s not testing enough, given the scale of its outbreak. And the testing it is doing, for reasons we’ll explain, isn’t helping as much as it should.

The good news is that there might be a simple solution: new tests that prioritize speed over sensitivity.

Storms aside, the main reason U.S. testing is going down instead of up is because the type of testing we’re doing — PCR (polymerase chain reaction) — seems to have reached its limit. PCR tests are the gold standard for diagnosing COVID-19, and rightly so: They correctly identify more than 98 percent of positive cases.

But they’re also slow, and getting slower. As the virus spreads, more and more potentially exposed Americans are demanding tests, forcing overwhelmed U.S. labs to compete with other countries for the supplies required to process so many samples. Often, labs run out. As a result, crippling backlogs have been delaying test results for so long they’ve essentially become worthless.

The collapse of U.S. testing has, in short, exposed its fatal flaw. Costly and cumbersome PCR tests are fine when an outbreak is relatively modest; in that situation, you can afford to invest in a slower, labor-intensive test that won’t miss any positive cases because you want to stop the virus from spreading before it’s too late.

But when it’s already too late — when more than 4.8 million infections have been reported and nearly 160,000 people have died — the PCR infrastructure can’t keep up.

That’s why experts such as Dr. Michael Mina, an assistant professor of epidemiology at both Harvard Medical School and the Harvard T.H. Chan School of Public Health, are suggesting we scrap it and start over.

“We need to change the whole script of what it means to test people,” Mina recently explained.

Imagine a $1, at-home, paper-based test that’s as easy to distribute and use as a pregnancy test. Imagine waking up in the morning, adding saliva or mucus to a tube of chemicals, waiting 15 minutes, dipping a paper strip in the tube and reading your results — instantly.

Now imagine every single person in America doing this every couple of days.

So-called rapid antigen tests aren’t science fiction. In fact, they already exist. Two such tests, made by BD and Quidel, have received emergency authorization from the Food and Drug Administration, though both still require instruments to run. (The governors of six states announced this week a joint bid to purchase a total of 3.5 million of these antigen tests.) Another $1 antigen test has been put to use in Senegal. And U.S. companies such as E25Bio and Sherlock Biosciences have developed at-home tests as cheap and easy as the one described above.

These are not the same thing as the antibody tests you might have heard of, which detect virus-fighting substances in the blood of people who were infected previously (and may therefore have immunity). Rapid antigen tests are meant to detect ongoing, active infections.

So why isn’t the U.S. government mass-producing antigen tests and distributing them freely to everyone? The major hurdle, so far, has been what news stories tend to describe as “accuracy.” But “sensitivity” is a better way to think about it.

PCR tests make thousands of copies of the virus’s RNA and thus can detect it at very low levels. Antigen tests rely on a molecule that binds to the coronavirus’s protein spikes; at very low levels of infection, there may not be enough viral particles in a sputum sample to trigger a positive result.

The fear is that if we rely on antigen tests, we’ll miss many cases. But there are two reasons this fear may be unfounded.

The first is that we’re already missing tons of cases. According to CDC antibody data, our current PCR system is only testing enough people to detect about 10 percent of the total number of infections. “If everyone took an antigen test today — even identifying only 50 percent of the positives — we would still identify 50 percent of all current infections in the country,” Jha has explained. That’s “five times more than the 10 percent of cases we are likely currently identifying because we are testing so few people.”

The second is that the amount of coronavirus in the body increases exponentially in the early days of infection. At first, during the incubation period, no test would be sensitive enough to detect it. About three to five days later, a PCR test would pick it up. After another eight to 24 hours, according to Mina, a rapid antigen test would show a positive result.

So the question isn’t whether an antigen test would detect an infection. It’s when.

This is a crucial distinction. Say the PCR test delivers a positive on day four, and the antigen test delivers a positive on day five. As best as experts can tell, both day four and day five are before or near the beginning of the window when people can transmit the virus to others. But if the person who takes the PCR test doesn’t find out whether he or she is positive until day eight, or even day 14, while the person who takes the antigen test finds out on day five, the antigen test is far more useful for stopping the spread of the virus, even though it’s less sensitive.

What if your viral load was too low on day five for the antigen test to detect it? Your infection probably wouldn’t be very transmissible yet. Then the next test you take, on day seven, would pick it up. And the person who took the PCR test still wouldn’t have the results.

“The vast majority of PCR positive tests we currently collect in this country are actually finding people long after they have ceased to be infectious,” Mina recently explained. “All we’re doing with all of this testing is clogging up the testing infrastructure, and essentially finding people for whom we can’t even act because they are done transmitting.”

Current FDA guidelines stipulate that any new coronavirus test vying for emergency clearance must perform nearly as well as a PCR test. But as fall approaches — and with it colder weather, increased indoor activity, a return to school and the potential for even larger waves of infection — the time may have come to rethink those regulations.

Rapid antigen tests have their challenges. Equitable distribution on a mass scale would probably require billions of dollars in government investment; cheap and easy at-home tests would work only if everyone takes them conscientiously.

But experts say they’re starting to make more sense than the status quo.

“If you had asked me this a couple months ago, I would have said we just need to be doing the PCR tests,” Susan Butler-Wu, a clinical microbiologist at the University of Southern California, told the New York Times Wednesday. “But we are so far gone in this country. It is a catastrophe. It’s kitchen sink time.”

A knowledge error diminished a wholesome 30-year-old man to the scale of a thumb, qualifying him for a COVID-19 vaccination