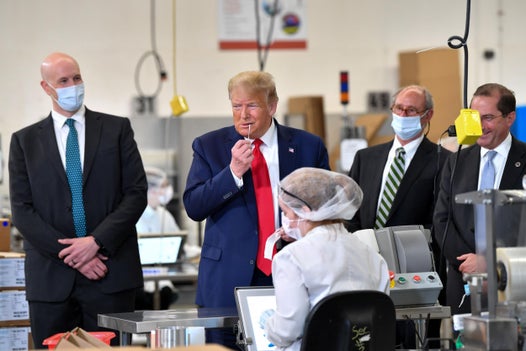 A medical swab manufacturer was forced to discard coronavirus tests following Donald Trump’s visit to its Maine facility, according to USA Today.

While workers in lab coats and personal protective equipment worked on the factory floor during the president’s visit to Puritan Medical Products on Friday, Mr Trump — who did not wear a mask — walked through the facility and visited with workers.

Puritan’s marketing manager for the company told USA Today that the factory was in “limited” operation during the president’s tour and “swabs produced during that time will be discarded”.

It’s unclear how many testing swabs will be thrown out, and why, though the move follows reports of test shortages during the Covid-19 crisis as states begin to reopen and need to expand their testing capacity.

A company representative was not immediately available to respond to The Independent‘s request for comment.

The visit was among several White House trips to medical manufacturing facilities within the last several weeks as the president dismissed concerns that shortages in tests and other supplies at the onset of the outbreak in February and March have significantly stunted the US response.

Mr Trump has insisted that “anyone” in the US is able to be tested, while his administration has recently accelerated production of tests as labs process as many as 400,000 tests a day. However technicians and health officials have expressed concerns about a lack of nationwide consistent strategies and inconsistent results from a patchwork response to the virus.

This week, Robert Redfield, director of the Centres for Disease Control and Prevention, told Congress: “I don’t want to get into the number of tests because I don’t think that’s the real issue … It’s how testing is used and what’s the consequence.”

In May, Puritan Medical Products, one of two companies that manufacture swab tests in the US, announced plans for a second plant in Maine with a goal of producing up to 40m swabs a month, according to a company statement.

The company was awarded more than $75m through the Defence Production Act to build US capacity for testing supplies during the pandemic.

Puritan said that it expects to begin producing swabs at its second plant by 1 July.

Nearly 2m people have been infected and more than 108,000 people in the US have died from illness related to the virus, according to data from Johns Hopkins University.

Coronavirus nasal swab kits and labs go into overdrive in US

Israel, already main the world in rolling out the COVID-19 vaccines, goals to immunize total nation by the top of March