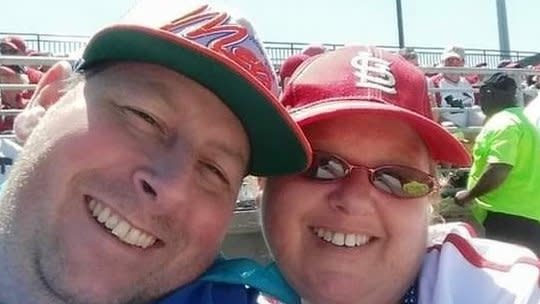 Brian with his wife Erin, who passed away this month

A Florida taxi driver, who believed false claims that coronavirus was a hoax, has lost his wife to Covid-19.

Brian Lee Hitchens and his wife, Erin, had read claims online that the virus was fabricated, linked to 5G or similar to the flu.

The couple didn’t follow health guidance or seek help when they fell ill in early May. Brian recovered but his 46-year-old wife became critically ill and died this month from heart problems linked to the virus.

Brian spoke to the BBC in July as part of an investigation into the human cost of coronavirus misinformation. At the time, his wife was on a ventilator in hospital.

Erin, a pastor in Florida, had existing health problems – she suffered from asthma and a sleeping disorder.

Her husband explained that the couple did not follow health guidance at the start of the pandemic because of the false claims they had seen online.

Brian continued to work as a taxi driver and to collect his wife’s medicine without observing social distancing rules or wearing a mask.

They had also failed to seek help as soon as possible when they fell ill in May and were both subsequently diagnosed with Covid-19.

Brian and Erin both came across conspiracy theories on Facebook

Brian told BBC News that he “wished [he’d] listened from the beginning” and hoped his wife would forgive him.

“This is a real virus that affects people differently. I can’t change the past. I can only live in today and make better choices for the future,” Brian explained.

“She’s no longer suffering, but in peace. I go through times missing her, but I know she’s in a better place.”

‘This thing is real’

Brian said he and his wife didn’t have one firm belief about Covid-19. Instead, they switched between thinking the virus was a hoax, linked to 5G technology, or a real, but mild ailment. They came across these theories on Facebook.

“We thought the government was using it to distract us,” Brian explained, “or it was to do with 5G.”

But after the couple fell ill with the virus in May, Brian took to Facebook in a viral post to explain that he’d been misled by what he’d seen online about the virus.

“If you have to go out please use wisdom and don’t be foolish like I was so the same thing won’t happen to you like it happened to me and my wife,” he wrote.

In May, a BBC team tracking coronavirus misinformation found links to assaults, arson and deaths.

Doctors and experts have warned that the potential for indirect harm caused by rumours, conspiracy theories and bad health information online remains huge – especially as anti-vaccination conspiracies are being spread on social media.

While social media companies have made attempts to tackle misinformation about coronavirus on their platforms, critics argue that more needs to be done in the coming months.

A Facebook spokesperson told the BBC: “We don’t allow harmful misinformation on our platforms and between April and June we removed more than seven million pieces of harmful Covid-19 misinformation, including claims relating to false cures or suggestions that social distancing is ineffective.”

CDC changes its ‘confusing’ guidelines on coronavirus and surfaces. Here’s what we know.