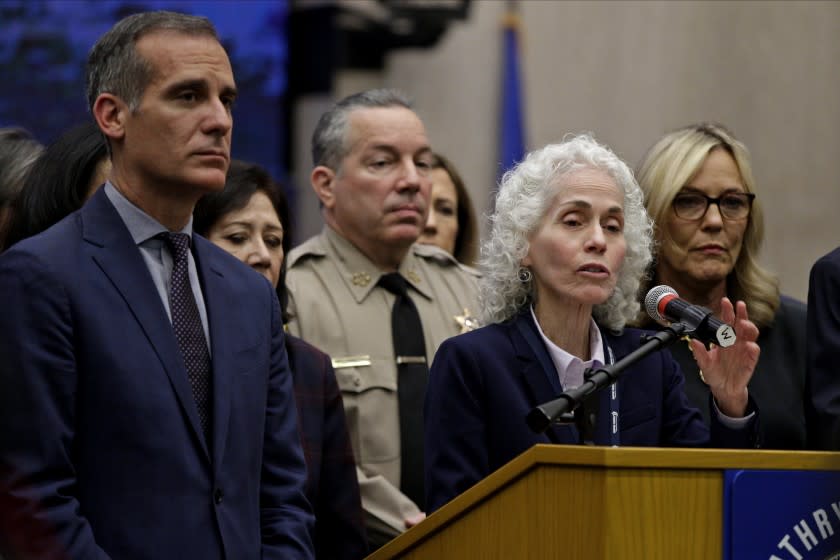 Exactly who is in charge of the COVID-19 pandemic response in Los Angeles? The mayor of Los Angeles? L.A. County supervisors? County Public Health Director Barbara Ferrer? Gov. Gavin Newsom? Someone else?

At this point it’s hard to know for sure who is calling the shots regarding how to contain an alarming coronavirus surge in the county. The answer is all of them. Or none of them, depending on the day or who’s talking. On Sunday, Los Angeles Mayor Eric Garcetti didn’t offer much clarity when he told CNN, “Mayors often have no control what opens up and doesn’t — that’s either at a state or county level.”

The comment was more than a little misleading. Garcetti can and has ordered businesses closed and reopened over the last few months within the city borders, and it is to his credit that he took early and decisive action. But his bigger point seems to be that making decisions of this magnitude at a municipal level doesn’t make sense, even for a gargantuan city like Los Angeles, and that there was some failure of leadership at the county and state level.

He’s not wrong. The very structure of our local governments leaves an accountability vacuum that isn’t helped by the confusing overlap of various pandemic restrictions, some of which have been lifted and reimposed in the state, the county and city — and none of which have been adequately enforced. No wonder the public and some businesses have thrown up their hands and done their own thing, which is at least part of the reason for the June resurgence of COVID-19 cases in California and L.A.

And now Garcetti says that if the trend lines for coronavirus cases and hospitalizations don’t improve soon, the city may return to stricter restrictions that go beyond even the sweeping orders handed down by the governor last week.

That may be unavoidable if hospitals start filling up here, as they have in other places. But we can’t go back to the old pandemic playbook this time.

First, any new restrictions must be targeted policies that focus on documented areas of spread. Blanket shutdowns are blunt instruments that only make sense in the absence of data. But we’ve learned more since March about how the virus spreads, such as through family gatherings and in factories. If there’s no data showing that, say, bookstores are a significant source of spread, then they ought not to be penalized.

Second, whatever new restrictions are imposed must be done countywide. It’s ineffective and confusing to have rules change at city borders. And they must be followed up with a show of enforcement to make it clear that following them isn’t optional.

And finally, Los Angeles city and county elected officials (you too, Sheriff Alex Villanueva) need to put aside their territorial instincts and present unified leadership with a clear line of accountability, then communicate a consistent and unequivocal message about how we are going to reflatten the coronavirus curve in greater L.A.