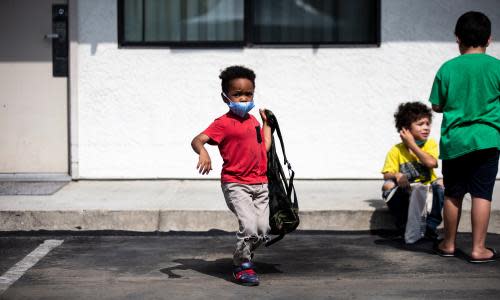 In the most ambitious plan of its kind, Los Angeles Unified has announced plans to test its roughly 600,000 students and 75,000 employees as the nation’s second-largest school district prepares for the eventual return to in-person instruction.

The superintendent of Los Angeles Unified, Austin Beutner, said in a statement the program will provide regular Covid testing and contact tracing for school staff, students and families.

“Extraordinary circumstances call for extraordinary actions, and while this testing and contact tracing effort is unprecedented, it is necessary and appropriate,” Beutner said.

The testing program is set to kick off Monday, with additional services to roll out as the school year continues. Over time, testing will be available to all children and staff members in the sprawling school district that has more than 600,000 students. The district said services will also be offered to family members of students and staff who test positive for Covid-19.

Related: ‘Who are we willing to sacrifice?’: teachers’ fears grow as US schools plan reopenings

Beutner said case numbers in Los Angeles still far exceed state guidelines for a safe return to school and said that in-person instruction for all students is “some time away”.

“The level of new cases in Los Angeles are still two and a half times the state guidelines, and while the portion of those testing positive is below state thresholds, it’s still considerably higher than the World Health Organization standards and those in place for New York,” Beutner told Los Angeles Times.

Testing will be prioritized for employees already working at schools, which include staff members assigned to the childcare centers that have remained open for children of teachers and other staff. Eventually, testing will be opened to all of the district’s students. The frequency of testing will be based on health metrics as the pandemic evolves.

Beutner said in an op-ed that published over weekend that the testing effort will cost the school district an additional $300 per student over the course of a school year. While he didn’t include a total costs, figures based just on the district’s student enrollment raises the price tag to at least $1.8m.

Joining the effort will be scientists from UCLA, Stanford University, Johns Hopkins and the former education secretary Arne Duncan, who will oversee a task force alongside Beutner.

Beutner said he hopes the findings from the effort will inform other school districts’ efforts to track and control the disease. So far New York City remains the only major US school district with plans to open classrooms for part-time, in-person instruction at the start of the fall semester.

For the moment, testing plans in New York City schools remain less defined. The city has asked all staff members to get tested before instruction resumes on 10 September and said they should be tested regularly throughout the school year – but hasn’t yet clarified how students will be tested, the New York Times reported.

The surge has experts worried that school districts could fuel an additional spike in case numbers if they move too soon to reopen.

Data from the Center on Reinventing Public Education, which has been compiling school districts’ plan for instruction, shows that most school districts are planning for a return to in-person instruction this fall, if only partially, and that most will offer remote learning for families who choose.

But tensions have flared between school officials and parents in states such as Georgia and Florida, where state officials moved to reopen schools for in-person learning amid surging coronavirus cases.

“Putting people together – whether they’re children or older adults – is the worst thing you can do in the face of the pandemic,” said John Swartzberg, a clinical professor emeritus of infectious diseases and vaccinology at UC Berkeley’s school of public health.

14% of white People know somebody who died from the coronavirus. For Black People, it is 26%.

Rhode Island supplied childcare to 19,000 children this summer time, and solely 30 examined constructive for the coronavirus. Right here is the 4-step plan they adopted.