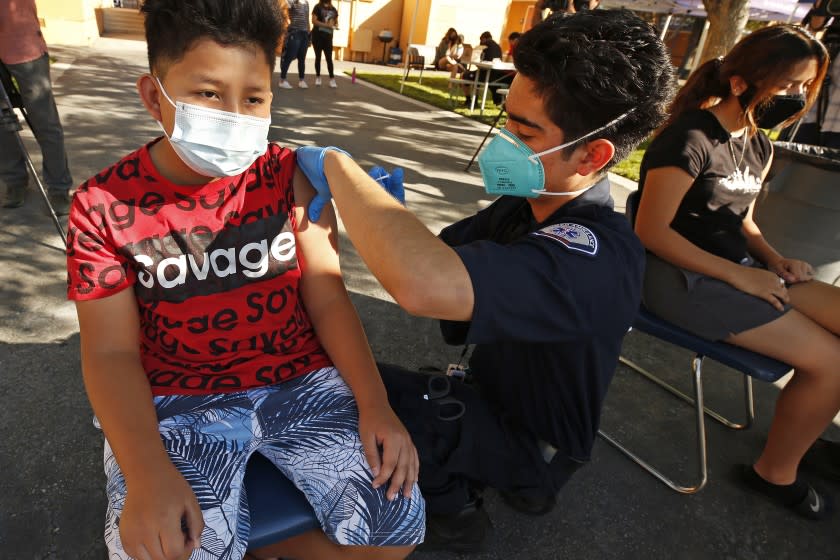 Children are being newly hospitalized for COVID-19 at a record rate in the United States, with numbers surging since the beginning of July as the Delta variant has overtaken the nation.

But that national boom has been driven largely by a few states, such as Florida, Texas and Georgia, and the numbers in California have been less dire.

While there has been a rebound in recent weeks in California, rates of new hospitalizations for COVID-19 among kids and teens age 17 and younger have not reached the heights as in the hardest-hit parts of the country. Nor have those rates surged as high as last winter. That’s a major difference from Florida and Texas, where daily rates of youth hospitalization for COVID-19 surpassed their wintertime peak.

California is now reporting 18 new hospitalizations a day among children and teens, according to the U.S. Centers for Disease Control and Prevention. That is 10 times worse than just two months ago but still below winter levels, when there were 29 children a day being newly hospitalized with COVID-19.

The recent uptick in pediatric hospitalizations has been discouraging for doctors and troubling for parents with children younger than 12, who are not yet eligible to receive a coronavirus vaccination — especially as schools reopen their doors. The spread of the Delta variant has also raised questions about whether it is causing more severe disease than earlier variants.

Public health officials have said that California has taken steps to ensure children can go back to school safely, including requiring masks in indoor school settings and regular testing for unvaccinated workers. They also believe higher-than-average levels of vaccination in the state will help protect children.

“Parents should feel reassured that case rates are still very low amongst children; serious illnesses still remains relatively rare,” said L.A. County Public Health Director Barbara Ferrer. “And if we all are doing our part, we’re hopeful that schools are going to open with a lot of safety and without a lot of increased risk.”

Weekly rate of hospitalization per 100,000 by age category for pediatric patients

Still, schools are reopening at a fraught moment.

Earlier this summer, there were so few children suffering from COVID-19 at Rady Children’s Hospital in San Diego that medical staff decided they no longer needed a special unit to isolate young patients with the virus. Only four children were admitted with the coronavirus during the month of June.

“We were all congratulating each other that COVID was gone,” said Dr. John Bradley, Division of Infectious Diseases director at Rady. “A little prematurely, it turns out.”

Earlier this week, there were four children hospitalized with COVID-19 at the San Diego hospital. That increase has been disappointing but still far below last winter, when there were three to four times as many on a typical day, Bradley said.

Children’s Hospital Los Angeles said it had 14 hospitalized patients with the coronavirus as of Thursday — triple the number in the previous week — and half of them are showing symptoms that could be related to COVID-19, according to hospital officials.

Children’s Hospital of Orange County is seeing similar trends. Earlier in the summer, there were many days where there was not a single child hospitalized with COVID-19 at the Orange hospital, but an uptick began in mid-July. As of Thursday, there were 10 children hospitalized, five of whom were in intensive care.

“Children are less likely to become severely ill with COVID compared to adults,” said Dr. Coleen Cunningham, the hospital’s senior vice president and pediatrician in chief. “However, they are not immune, and some become quite ill,” including from pneumonia and organ failure; inflammation that can lead to heart damage; and long-lasting symptoms of fatigue and headaches, a condition known as “long COVID.”

But “none of us would accept even a 1 in 10,000 chance of our child being killed or maimed when we could do something to reduce that risk,” said Dr. Brad Spellberg, chief medical officer for L.A. County-USC Medical Center on the Eastside, the flagship public hospital for the county.

Spellberg said that despite the overall increases in L.A. County, there were no kids hospitalized with COVID-19 as of Thursday morning at County-USC — and only one or two children coming to the hospital daily with symptoms that could be treated at home.

Nationwide, there are now about 263 children newly hospitalized a day for COVID-19, a 20% increase from the winter peak.

Experts say California is likely faring better because of relatively higher vaccination rates. Children under the age of 12 are not yet eligible for vaccines, but they can be better protected from COVID-19 if teenagers and adults around them are fully vaccinated, according to experts.

Vaccination rates have lagged in the states with the highest rates of new COVID-19 hospitalizations among children, and some, such as Florida and Texas, have also banned local governments and schools from imposing mandatory mask mandates, although some local officials have pursued the orders anyway.

The youngest patient as of Tuesday was 2 weeks old and on oxygen, Neely said. Others ranged into their teens. All were unvaccinated, some because they were too young for the shots.

Delta “is not discriminating whether you have underlying problems or not,” said Dr. Daisy Dodd, a pediatric infectious-disease specialist with Kaiser Permanente Orange County. “It’s hitting anybody that is not immunized.”

Naomi Wilson tested positive for COVID-19 despite being vaccinated, and her son, Micah Wilson-Nye, also got the virus. She has shared her story in the hopes of encouraging pregnant and nursing mothers to get vaccinated. (Jason Armond/Los Angeles Times)

COVID-19 outbreaks have been increasing in L.A. County schools and programs in recent weeks, although not to the same extent as during the autumn and winter. Out of 25 outbreaks that occurred between April and July, more than half were associated with youth sports, and associated with inconsistent mask wearing; socializing outside of games and practices; traveling and lodging together during training camps and athletic events.

Federal health officials say it’s expected that hospitalization rates will rise among children given the nature of the Delta variant, which is at least twice as transmissible as the Alpha variant and produces up to 1,000 times more levels of virus in the upper throat, said Dr. Anthony Fauci, the U.S. government’s top infectious-diseases expert.

Because Delta is so highly transmissible, “you will see more children likely get infected,” Fauci said at a recent briefing. And “even though the percentage is small — a certain percentage of children will require hospitalization.”

There is no definitive evidence that children are suffering greater severity of disease from the Delta variant, Fauci said, although it remains a possibility.

Experts say that younger children have been less likely to contract COVID-19 because they have far fewer proteins called ACE2 receptors in their noses that the virus must access to infect the body.

Among states that have been reporting the data, no more than 0.03% of all child cases of COVID-19 have resulted in death, according to a recent report by the American Academy of Pediatrics and the Children’s Hospital Assn. And less than 1% of children with the virus have been hospitalized, that report found.

Still, some families who have endured the virus caution that people should not be cavalier about what it means for a child to get COVID-19.

A few weeks ago, Naomi Wilson had stopped at Starbucks after running an errand and was alarmed to realize that she couldn’t taste her brown sugar oatmilk shaken espresso.

The Glendale resident, who was fully vaccinated, soon tested positive for the coronavirus, an example of a “breakthrough” infection. Her 16-month-old son, Micah, who is too young to be eligible for the vaccine, also got the virus. At first, the child seemed unaffected.

Then came the screaming: nights when he would wake up hourly, crying out in pain. Wilson took the toddler to urgent care, where a doctor examined his badly swollen throat and what looked like an ear infection. The doctor prescribed an antibiotic and instructed them to bring the boy back to the hospital if he failed to improve, Wilson said.

Micah never ended up being hospitalized, but “the whole thing was just terrifying,” Wilson said.

Another Glendale parent, Sari Sherwood, said that despite taking precautions, her entire family got COVID-19 in December, including her sons, ages 10 and 12. Her older son became so delirious that it was scary, she said.

Her younger son got a fever that soon cleared, but “he seems to have the most trauma,” Sherwood said. “He is so scared of getting sick and of getting his father sick. … The PTSD of kids is not being talked about.”

Experts urged that parents get their children tested for the coronavirus if they see symptoms of illness consistent with COVID-19, such as fever, chills, difficulty breathing, fatigue, body aches, headaches, loss of taste or smell, sore throat, runny nose, nausea or diarrhea. Although most children who get infected will not need to be hospitalized, they can spread it to others who will, so testing ensures that they can be quarantined to protect others, said Neely of Children’s Hospital Los Angeles.

Wilson, the mother of the Glendale toddler, credits vaccine-induced antibodies she had passed along to her son through nursing with protecting him from a more severe case of COVID-19.

She has shared her story as a “cautionary tale” to encourage parents to take COVID-19 seriously — and specifically to encourage pregnant and breastfeeding moms to get vaccinated.

Many parents “are still operating under this mindset where it doesn’t affect kids,” she said. “And I have seen firsthand that it really does.”

Don't Miss it Canada to require COVID-19 vaccine for airplane, prepare, ship vacationers
Up Next A Southwest Airways flight attendant died from COVID-19 lower than 2 months after testing optimistic, following a visit to Hawaii, reviews say