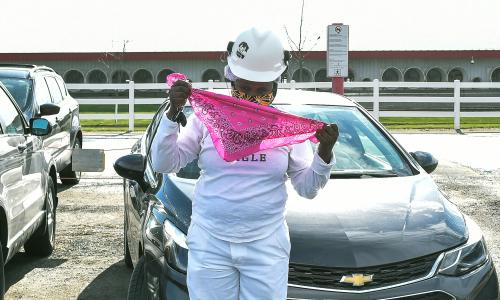 Ethnic minorities have been the hardest-hit by the coronavirus in the US, and now Latino workers are facing fresh difficulty, as they and their communities suffer discrimination after contracting coronavirus in meat processing plants and warehouses.

More than 10,000 meatpacking workers, many of them Latino, have contracted coronavirus in the US, according to the United Food and Commercial Workers union, and dozens have died.

Latino advocates say workers are also now experiencing racism due to fears they have contracted the virus in the workplace.

Related: ‘The virus doesn’t discriminate but governments do’: Latinos disproportionately hit by coronavirus

“We’ve received reports that some workers at a plant were turned away from grocery stores and not allowed in, because they were presumed to have the coronavirus because they worked at the local meatpacking plant,” said Domingo Garcia, national president of the League of United Latin American Citizens (Lulac).

“We’ve also heard in Marshalltown [Iowa] people were being refused service because they thought they were positive for Covid-19 – just because they were Latino,” Garcia added.

Latino workers have been particularly hard-hit in some areas by their reliance on jobs in meat processing plants or large warehouses which have been kept open during the pandemic, despite reports of poor health and safety standards and a lack of protective equipment.

“Four out of every five Latinos are considered essential workers,” Garcia said. “They’re in construction, food processing, grocery stores, they’re farm workers. So they don’t have the luxury of being able to work from home, and therefore they’re being exposed to Covid-19 in ways that many American workers are not.

Compounding that, Garcia said, is the lack of health insurance among some Latino workers. Garcia said Lulac is investigating “multiple cases” of Latino employees complaining about workplace conditions “and then being fired”.

The outbreaks in meat plants have been shocking.

In April an outbreak at the JBS meat processing plant in Colorado killed three workers, while many of Iowa’s more than 8,000 coronavirus cases have been linked to plants including Tyson Foods, in Waterloo. Tyson Foods was forced to suspend operations at the end of April after 180 coronavirus infections were linked to the plant.

There was a similar story in Hazleton, Pennsylvania, which became one of the worst-hit areas early on in the crisis. Health officials identified Cargill, a meat-processing plant, as one of the sources of the virus.

“The Cargill plant is upwards of 90% Latinx,” said Jamie Longazel, an associate professor at John Jay College and author of Undocumented Fears: Immigration and the Politics of Divide and Conquer in Hazleton, Pennsylvania.

With the Latino meat plant workers, some of whom are undocumented, frequently living paycheck to paycheck, they could not afford to not go to work – particularly as large plants tend not to offer sick pay.

“They were demonized because the workers were then spreading it to their family members, so it became that the Latinx community was more affected,” Longazel said.

Elsewhere in the US anti-Latino sentiment has come from officials. In Wisconsin, the supreme court chief justice, Patience Roggensack, was criticized in early May after she seemed to downplay a coronavirus outbreak among workers at a meatpacking facility in Brown county, where a large proportion of the workers are minorities and immigrants.

“[The surge in coronavirus cases] was due to the meatpacking – that’s where Brown county got the flare,” Roggensack said. “It wasn’t just the regular folks in Brown county.”

Christine Neumann-Ortiz, executive director of the Wisconsin-based Voces de la Frontera immigrant-rights group, criticized Roggensack’s remarks as “elitist” and “racist”, and told the Guardian that Latinos had been subjected to “legalized discrimination” through their work.

“Without a question they have been discriminated against, because they are disproportionately more vulnerable to exposure and to having them or their families or their community impacted by the Covid-19,” Neumann-Ortiz said.

If there is one positive, Neumann-Ortiz said, it’s that the backlash could trigger a greater effort to change workplace conditions.

“It’s forcing workplace organizing to happen, in a way that wasn’t there before because the stakes are so high,” Neumann-Ortiz said. In some cases workers have refused to go to work due to unsafe conditions, which has forced companies to temporarily close down facilities to deep-clean plants, or provide better PPE.

“There is a new struggle on the frontline and it’s going to be here for a while to come,” she said.