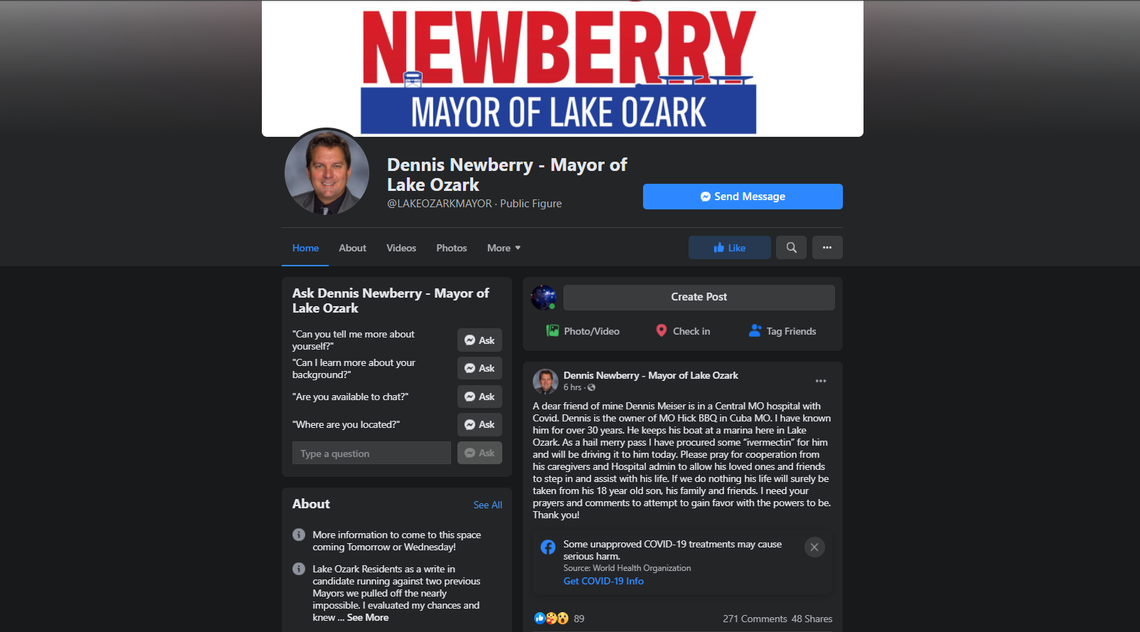 A central Missouri mayor on Monday shared a message asking for support to allow a longtime friend hospitalized with COVID-19 to be treated with ivermectin — an anti-parasite drug not approved for treating viruses — despite recent warnings from public health officials about doing just that.

In a Facebook post, Lake Ozark Mayor Dennis Newberry said his friend of 30 years, the owner of Missouri Hick Barbeque in Cuba, Missouri, is hospitalized with COVID-19. As a last ditch effort, the mayor said, he would take ivermectin to his friend in the hospital in an attempt to help with his treatment.

“Please pray for cooperation from his caregivers and Hospital admin to allow his loved ones and friends to step in and assist with his life. If we do nothing his life will surely be taken from his 18 year old son, his family and friends,” the mayor wrote. “I need your prayers and comments to attempt to gain favor with the powers to be.”

Lake Ozark Mayor Dennis Newberry said in a Facebook post on Monday that he planned to take and administer the controversial anti-parasite drug ivermectin to his friend in the hospital, where he’s battling COVID-19. Ivermectin is not a drug for treating viruses, and the federal government has not approved the drug for use in treating or preventing COVID-19 in humans.

The mayor’s post was tagged with a warning from Facebook, citing the World Health Organization, concerning the potential dangers of using unapproved treatments for COVID-19. Ivermectin is not a drug for treating viruses, and the federal government has not approved the drug for use in treating or preventing COVID-19 in humans.

The drug is commonly used in animals.

Newberry did not immediately reply to The Star’s request for comment.

The U.S. Food and Drug Administration does approve some uses of ivermectin for humans. Ivermectin tablets are approved at very specific doses for some parasitic worms, and there are topical formulations for head lice and skin conditions. It is often available at livestock stores, however, but, in those cases, is measured in doses with the expectation that the drug will be administered to animals.

Over the weekend, the FDA issued a consumer advisory explaining why people should not use the drug for COVID-19 infection.

In the face of misinformation, some states have continued to see residents trying to use the drug as a treatment option.

In Mississippi, the state saw an influx of calls to its poison control center of people reportedly ingesting animal-quantity doses of the drug. Most residents reported mild symptoms associated with ivermectin toxicity.