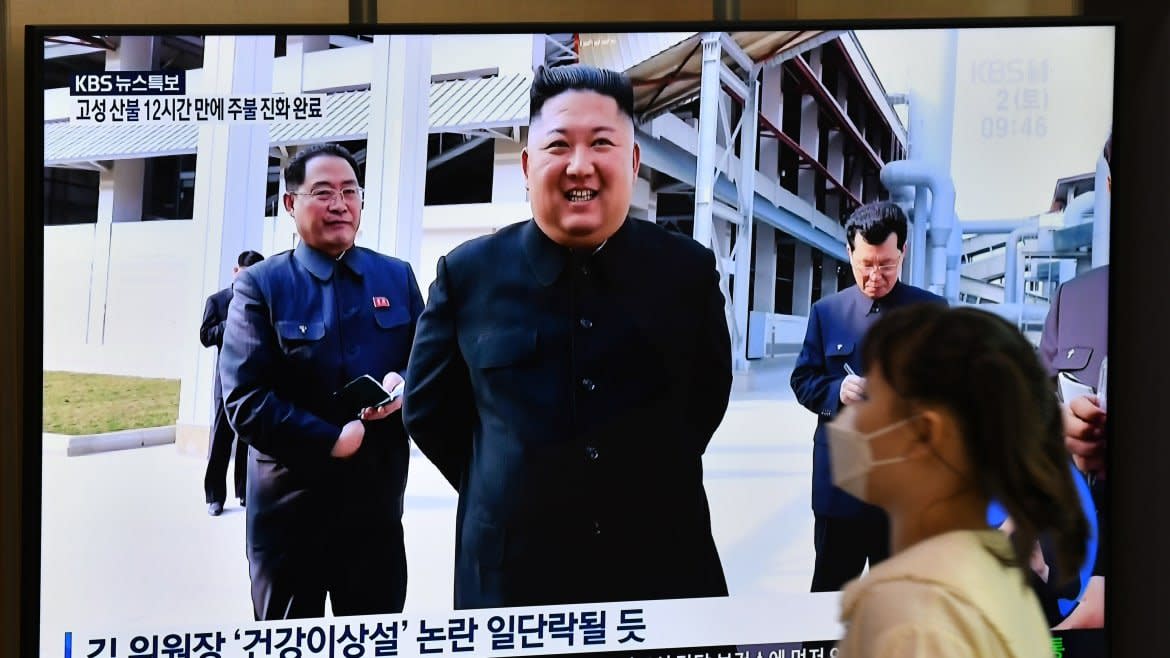 North Korea just announced its first case of COVID-19, casting blame most conveniently on a defector who had fled to South Korea and then re-defected back to the North, supposedly bringing the bug with him.

That’s the spin that North Korea’s state media, KCNA, is putting on the case after a meeting of the politburo of the Workers’ Party, at which Kim Jong Un himself made a rare appearance Whether he was there in person or “virtually,” on screen, was not clear.

But there was no doubt, from the the crisis atmosphere surrounding the meeting, of the severity of the pandemic that’s been afflicting the North for months—despite the regime’s refusal to acknowledge what’s going on. Also implicit in the unusually detailed KCNA dispatch, published in Rodong Sinmun, the party paper, was the need to buttress Kim’s image as a strong leader capable of dealing with the crisis.

Does Trump Know How Scary Things Are Getting in Korea?

Kim, generally called simply “supreme leader,” was reported by KCNA to have revealed “a critical situation in which the vicious virus could be said to have entered the country.”

The quotes on KCNA were not attributed directly to Kim, and it’s not certain if he personally made them or simply approved them. At the same time, he was reported to have taken what KCNA called “the preemptive measure of totally blocking Kaesong City,” just above the Demilitarized Zone about 40 miles north of Seoul. That’s where the defector may have crossed the line, possibly by swimming across the Imjin River as it flows from North to South.

Never previously has the North so much as hinted at any COVID-19 cases, even while announcing a series of precautions beginning with the closure of its borders with China in January and severe restraints imposed on the movement of diplomats.

The defector story, said Robert Collins, a long-time intelligence analyst for the U.S. command in Korea, “gives the Kim regime plausible excuse as to how virus infections started.” Collins, who has written numerous books and studies on North Korean issues, cited reports of areas “put under strict isolation” in North Korea—“about the only method the Kim regime has in containing any spread of the virus.”

The politburo meeting, as reported by KCNA, acknowledged the crisis precipitated by a pandemic of epic proportions—the country faces economic and food instability exacerbated by the U.S. and U.N. sanctions that make it extremely difficult for the North to carry on normal trade and commerce despite help from China. Having previously denied that anyone had come down with the disease, the state media had to stress Kim’s presence as party chairman when announcing the coronavirus case—critical to spreading the bad word after months of official obfuscation and denial of the disease.

The tone of the KCNA report suggests the need to reinforce Kim’s leadership at a time when confidence in his ability to control the pandemic is obviously in doubt.

Often out of sight for weeks at a time since onset of the coronavirus in January, Kim has reappeared most recently on a visit to a chicken farm at which he called for increased production and, several days before, to a hospital under construction in Pyongyang. At the hospital, he reportedly berated managers and workers for going too slow, definitely a sign of the immediate need for a vast improvement of medical facilities, including many more beds. On both visits, it was not clear exactly when he had been there, but he did look healthy if overweight, at least to judge from the photos released by KCNA.

Kim’s Sister Is on the Warpath

Kim’s reported appearance at the politburo was his most important in weeks—a chance to shore up confidence in the midst of a pandemic that appears beyond the ability of the North’s medical facilities to combat. Significantly, the North Korean state media was careful not to pin the blame on anyone living in the North but on a lone defector made to appear responsible for the entire outbreak.

Kim himself did not mention the defector, but KCNA opened its report by declaring “an emergency event happened in Kaesong City where a runaway who went to the south three years ago, a person who is suspected to have been infected with the vicious virus, returned on July 19 after illegally crossing the demarcation line.”

That’s the only mention of the defector until the last paragraph at which the politburo meeting “sternly took up the issue of the loose guard performance in the frontline area in the relevant area where the runway to the south occurred.” The politburo promised “severe punishment: for “the military unit responsible for the runaway case.”

South Korea’s military leadership is equally concerned about how a defector could have made it back to the North. An official with the South’s joint chiefs of staff rated the probability of the report of the defector returning to North Korea as “high” and said the military was “looking into the detailed routes” of his crossing. He was believed to be a 24-year-old man under investigation for raping a female defector.

Meanwhile, Kim has revealed “anxiety about his mortality,” said Lee Sung-yoon, professor at the Fletcher School of Tufts University, in his “rush to bolster his sister’s credentials”—that is, the role of Kim Yo Jong, who has denounced defectors as “mongrels” and is believed largely responsible for the decision to blow up the North-South liaison office built at South Korean expense at Kaesong.

“How convenient a narrative to blame a ‘mongrel’ for bringing the coronavirus into Paradise on Earth,” said Lee. “Now, Kim can claim that despite the threat of mass infection, he has acted swiftly and resolutely by locking down Kaesong City in order to contain the spread.”

North Korea has seized on the case with an alacrity that betrayed the severe unease of the regime about its stability, even its ability to function, during the pandemic. It was as though they badly needed just such a case to transfer the blame to an outside influence—and affirm the role of the “supreme leader” at a time when he has been largely away from public view.

Kim was reported to have said, again without quotes attributed directly to him, “that everyone needs to face up to the reality of emergency” and to have “appealed to all to overcome the present epidemic crisis by not losing the focus of thinking and action, practicing responsibility and devotion to be faithful and true to the leadership of the Party Central Committee, being rallied closer behind it so as to defend the welfare of the people and security of the country without fail.”

Behind those ponderous words is the widespread suspicion that the pandemic may have had a more devastating impact on North Korea than on most other countries, certainly than on South Korea, which has acted firmly to bring it under control while publishing daily numbers of new cases.

“COVID-19 definitely has a very negative impact on North Korea, regardless of how many people were dead or sick,” said Choi Jin-wook, former director of the Korea Institute for National Unification. They’ve “closed down the border with China for seven months”—meaning “no food, no daily manufactured goods.”

No one doubts the North’s medical system is incapable of dealing effectively with the pandemic.

“Their healthcare system was severely deteriorated during the arduous march of the mid-1990’s famine,” said Robert Collins, referring to the period in which as many as two million North Koreans are believed to have died of starvation or disease. “Doctors have little to offer patients who must buy their medicine on the black market. Few can afford anything significant in that line.”

An infamous WHO tweet claiming there was ‘no clear evidence’ that the coronavirus could spread between humans was posted to appease China, report says

Canines Are Serving to Sniff Out Covid-19, Even in Sufferers Who Are Asymptomatic