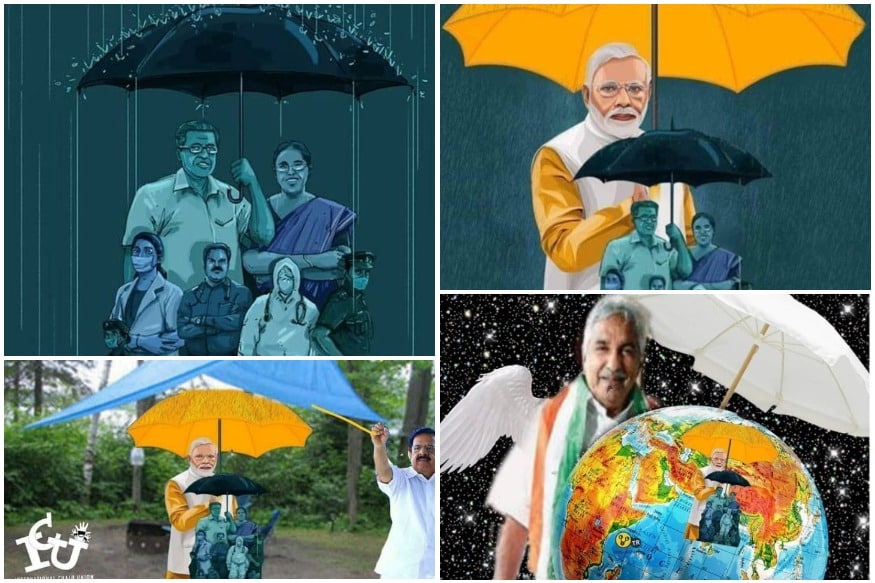 Kerala’s lone BJP MLA O Rajagopal shared the same poster but with one distinct modification – the new poster had a looming image of PM Narendra Modi with an even bigger umbrella, towering over Vijayan.
News18.com
Last Updated: May 1, 2020, 6:01 PM IST

The coronavirus pandemic seems to have spawned a cachet of memes. And the latest set comes from Kerala, where a poster by an artist seems to have led to a political meme-war between the ruling and opposition factions in the state.

Kerala-based artist Ashin Munnu shared an animated poster featuring CM Pinarayi Vijayan along with Health Minister KK Shailaja holding an umbrella. Though it rained around the umbrella, the poster showed Vijayan and Shailaja firmly holding the umbrella up and protecting all those under it including frontline workers such as doctors, police, medical health professionals, and essential workers.

The image was shared on the artist’s Instagram page on April 17 and soon went viral across other social media platforms. But it didn’t stop there.

Seemingly irked by the poster, Kerala’s lone BJP MLA O Rajagopal shared the same poster on his official Facebook page but with one distinct modification – the new poster had a looming image of PM Narendra Modi with an even bigger, yellow umbrella, towering over Vijayan’s and providing the ultimate protection.

While many trolled the BJP MLA for editing the photo to fit in PM Modi, the image went on to be heavily memed on Facebook parody groups such as the International Chalu Union, a group dedicated to Malayali memes.

A Twitter user called Varun Santosh also listed all the memes that came up across party lines in Kerala, where BJP is a only a minority party. Some of the tweets featured Congress leader and former Kerala CM Oommen Chandy with the biggest umbrella while others showed Leader of Opposition Ramesh Chennithala holding a tarpaulin tent over Modi’s umbrella.

Factions are legendary in Kerala Congress. Oommen Chandy, the former CM, was soon in the picture with a shamiana over the tent.
8/n pic.twitter.com/Xj5hjadLoI

Some even depicted Oommen Chandy as an angel protecting the entire planet while others edited him to look like Lord Krishna of the Hindu pantheon, holding the entire world up on his finger while protecting it.

The best of the lot. Oommen Chandy as an angel and Krishna protecting the entire world. Yes, Kerala is secular.

The Pinarayi Vijayan government in Kerala has been roudly appreciated for its efforts to counter coronavirus in the state. One of the first states to encounter the virus, Kerala recorded one of the highest recovery rates earlier in April. For patients who tested positive between March 9 and 20 in the state, data shows that 84 percent have recovered.

In contrast, recovery rate for the same in states like Maharshtra and Delhi was 5.5 percent and 4.4 percent respectively.

Analysts have praised Kerala’s expenditure and investment in public health systems as well as itrs ground livel coordination and support system which helped it to break the chain of transmission and contain the spread of the virus.