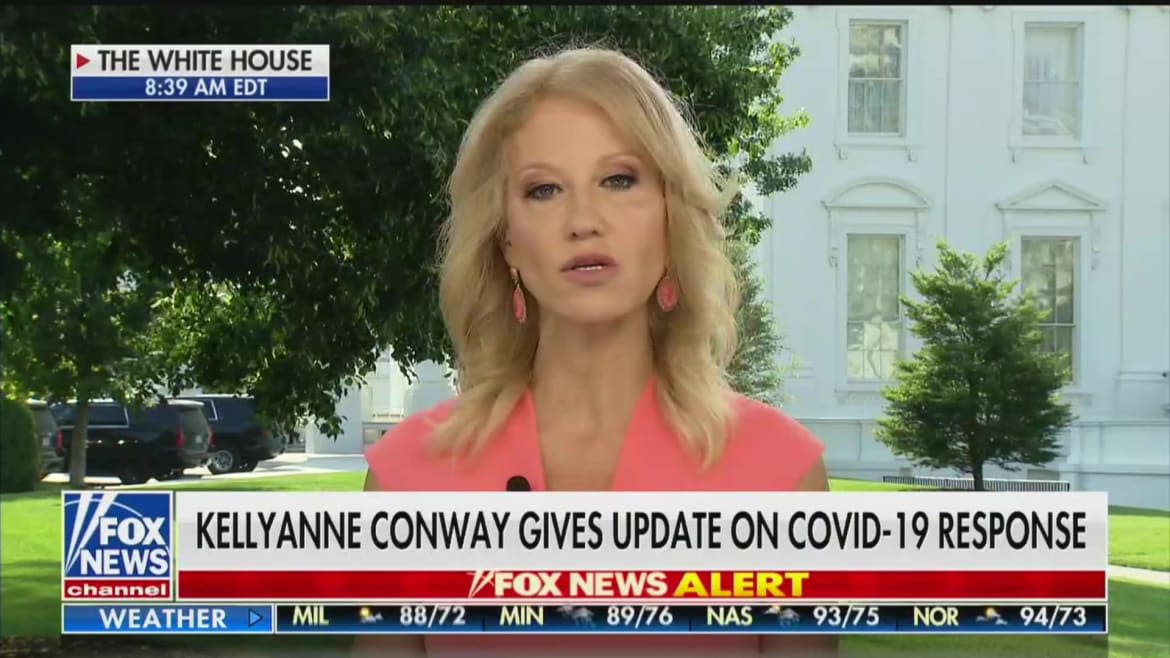 White House counselor Kellyanne Conway urged President Donald Trump on Friday to resume giving regular coronavirus briefings, claiming his sinking approval ratings on the pandemic will surge if the public hears from him daily on the crisis.

Amid a bevy of recent polls showing the vast majority of the American public strongly disapproves of the president’s handling of the virus that’s killed nearly 140,000 Americans, Conway appeared on the president’s favorite morning show Fox & Friends to react to the current surge in coronavirus cases.

After Conway brushed off the spike in cases as “hotspot surges” while assuring the Fox audience that the White House had the virus under control, co-host Steve Doocy wondered aloud why the president’s ratings were “underwater” on coronavirus.

“You look at the data, from public and private polling, and Joe Biden actually beats the president on COVID response and Joe Biden is in the basement not doing anything,” Doocy added.

The senior Trump aide first snarked about the former veep’s campaign strategy before saying the reason Trump’s “numbers may be a little softer” on COVID-19 is due to the end of Trump’s daily task force briefings.

“The president’s numbers were much higher when he was out there briefing everybody on his day by day basis about the coronavirus,” she said. “Just giving people the information.”

“They were out there every day when we had at some point 2,500 deaths in one day, at the highest level and I guess it was April or so, March and April, and the president and the task force were there most days, giving the information,” Conway continued. “I think the president should be doing that.”

Doocy, meanwhile, jumped in to ask why the president stopped with the daily briefings in late April, prompting the White House official to say “some people are encouraging him to stop.”

Doocy agreed that Trump should resume with his regular task force briefings, adding that the president was “fully engaged” on the pandemic. Conway, meanwhile, noted that the briefings don’t need to be “two hours” but that they shouldn’t be “zero minutes, either.”

In a follow-up gaggle with reporters at the White House, Conway repeated her assertion that the president needs to bring back the briefings, explicitly stating that his “numbers were much higher when he was out there briefing everybody on a day by day basis about the coronavirus.”

The daily task force briefings featuring the president came to an abrupt end in late April after the president openly suggested that injecting disinfectants and ultraviolet light into the body could be used as a way to kill the virus.

These are all nations which have already reported circumstances of the brand new, and extra infectious coronavirus pressure