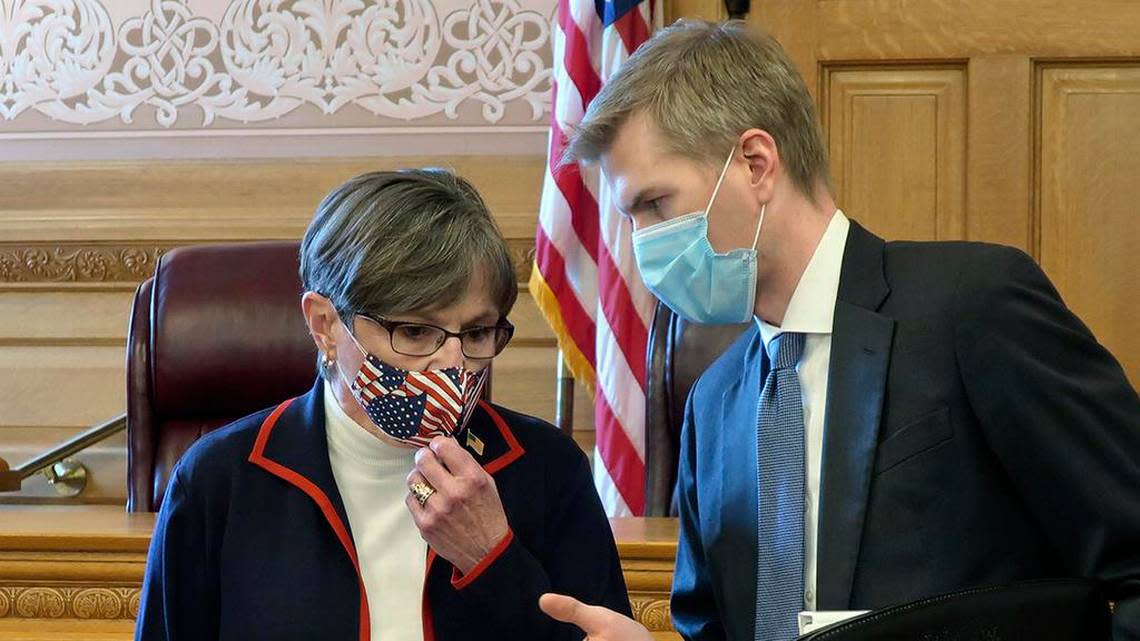 Counties in Kansas that instituted mask mandates experienced significantly lower rates of COVID-19 cases, hospitalizations and deaths compared with counties declining to take that precaution, researchers reported in the Journal of the American Medical Association (JAMA).

The study published Wednesday examined outcomes in 15 counties that adopted face-covering orders from mid-July to December and results in 68 counties that chose not to require residents to put on a mask during that period.

Donna Ginther, the study’s co-author and distinguished professor of economics and director of the Institute for Policy and Social Research at the University of Kansas, said counties that adopted masking during that portion of the pandemic reduced cases of infection by 35,000, hospitalizations by 1,500 and deaths by 500.

“Mask mandates and mask-wearing are low-cost, effective measures that promote public health and, in the case of COVID-19, saved lives,” Ginther said.

The Kansas Department of Health and Environment documented 158,083 cases of COVID-19 from July 10 to Dec. 4, which mirrors the caseload period examined by the researchers. Due to a lag in hospitalizations and fatalities, the researchers looked at incidence of both from July 10 to Dec. 18. In that five-month span, 5,216 residents of Kansas infected by the virus were hospitalized and 2,101 people died from complications of COVID-19.

“It’s nearly impossible to do a randomized controlled trial of mask wearing, so the natural experiment in Kansas is the best way to empirically demonstrate the efficacy of mask wearing,” Ginther said. “In the absence of vaccines, mask wearing provides one effective method of slowing the spread of respiratory viruses like COVID-19.”

Ginther worked with Carlos Zambrana, a post-doctorate researcher at the KU institute, on the JAMA report. Both are affiliated with the National Bureau of Economic Research in Cambridge, Massachusetts.

In July 2020, Gov. Laura Kelly issued an executive order on masking that was adopted in 15 counties. From July through October, 68 counties had no requirement to affix a face covering when in public spaces.

Kelly faced backlash from Republican lawmakers for issuance of mask directives and other executive orders tied to the pandemic. Her decision to move public K-12 and college instruction online was politically divisive as was her decision to temporarily close businesses deemed nonessential. Her attempt to restrain mass gatherings at churches to deter spread of COVID-19 was met by a legal challenge and set aside.

“The study confirms that Governor Kelly’s fact-based, all-of-the-above approach, specifically her implementation of a mask policy that worked for counties big and small, protected Kansans and our economy,” said Reeves Oyster, a spokeswoman for the governor.

The Kansas Legislature pushed through Senate Bill 40, which was signed by the governor and featured a provision that put a March 31 sunset on the governor’s mask order and all her other COVID-19 directives. Kelly decided to issue a new mask edict, which would have been optional for counties.

The Legislative Coordinating Council, which is controlled by GOP legislative leaders, voted along party lines April 1 to put an end to state-inspired masking by rejecting her executive order on face coverings.

“Numerous local governments have recently opted to ease or repeal their local mask mandates … demonstrating an increased desire to get back to normal and a refreshing trust in the people of Kansas to make their own decisions,” Masterson said.

The JAMA article relied on daily counts of COVID-19 cases and deaths per county in Kansas generated by The New York Times, while information on Kansas coronavirus hospitalizations by county of residence came from KDHE. The number of cases, hospitalizations and deaths were measured in terms of each county’s 2019 population to obtain a rate per 100,000.

The researchers said in JAMA their study was limited because it wasn’t able to control for daily testing rates by county across the state. Another consideration was that issuance of mask mandates didn’t mean a county’s residents were compliant. However, the researchers said in the medical journal their results should be considered “lower-bound estimates of the association between mask wearing and COVID-19.”

This story was produced by the Kansas Reflector, a nonpartisan, nonprofit news organization covering state government, politics and policy.

Don't Miss it Two children take a look at optimistic for COVID-19 throughout Royal Caribbean cruise
Up Next Coronavirus Epidemic Broke Out 20,000 Years In the past in East Asia and it Helped Human Genes Evolve