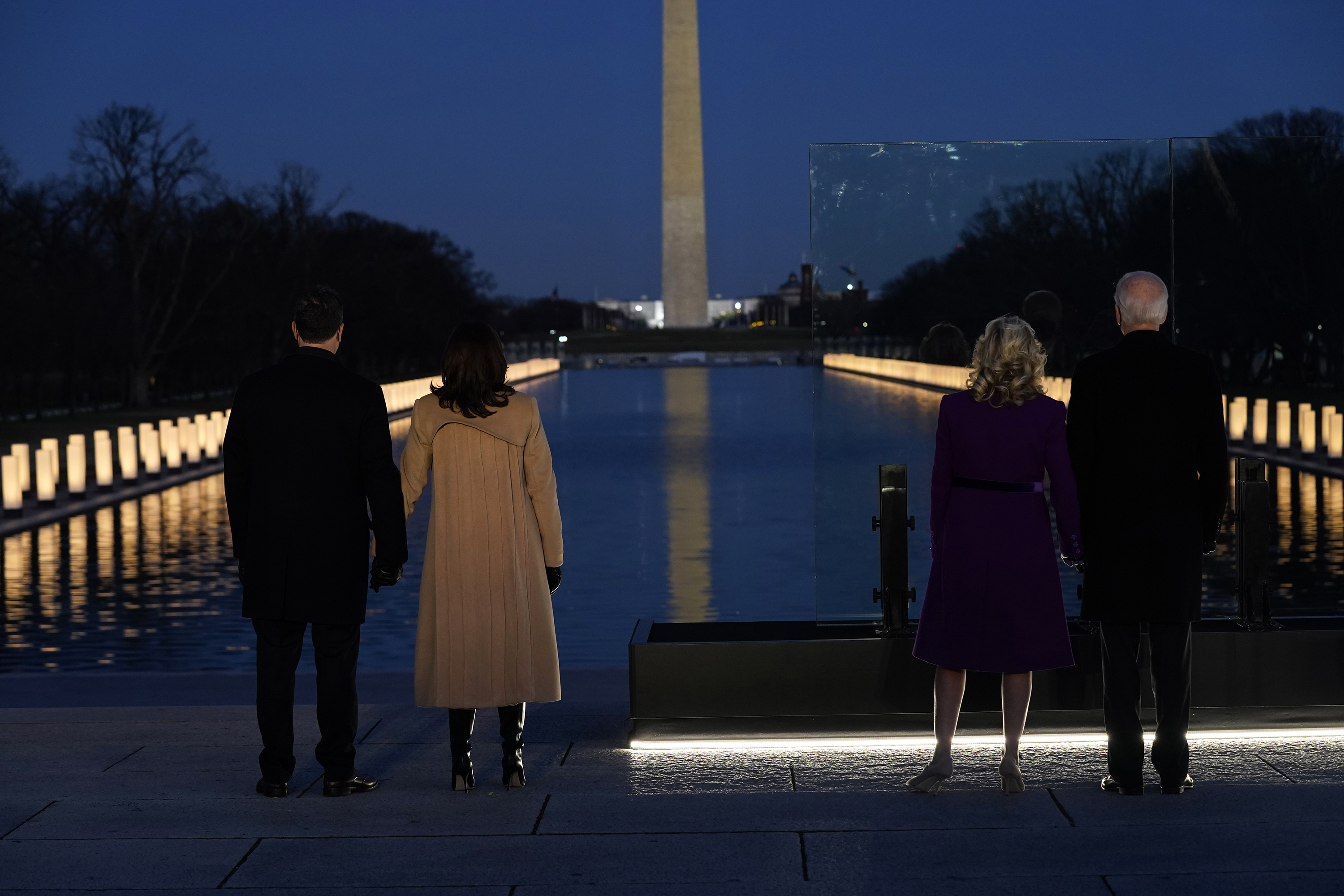 WASHINGTON — Joe Biden and Kamala Harris paid tribute to the nation’s 400,000 COVID-19 victims at a memorial in Washington, DC, marking the grim milestone before being sworn into office on Wednesday.

The president-elect’s first stop after arriving in the nation’s capital was to the reflecting pool at the Lincoln Memorial where 400 lights have been erected to reflect the lives lost to the ongoing COVID-19 pandemic.

Biden and Harris, who were joined by incoming first lady Jill Biden and second gentleman Doug Emhoff, both delivered solemn remarks punctured by a performance of “Amazing Grace” by Lori Marie Key, a 29-year old nurse from Michigan who went viral in April when footage emerged of her singing in her hospital’s COVID-19 ward.

“For many months we have grieved by ourselves. Tonight, we grieve and begin healing together,” Harris said.

“Though we may be physically separated, we, the American people, are united in spirit and my abiding hope, my abiding prayer, is that we emerge from this ordeal with a new wisdom to cherish simple moments, to imagine new possibilities, and to open our hearts just a little bit more to one another,” she said.

Biden thanked Key and nurses around the nation for their courage “and the pain they absorb for others.”

“To heal, we must remember. It’s hard sometimes to remember, but that’s how we heal. It’s important to do that as a nation. That’s why we’re here today,” he said.

The incoming commander in chief was then whisked to Blair House, a historic residence opposite the White House where he will spend his last night before being sworn in as the 46th president of the United States.

He will enter the White House as the devastating health crisis continues to lay waste to the US economy and COVID-19 deaths surge.

The US recorded a single-day high of nearly 3,900 fatalities earlier this month as officials wrestle with a slower than expected national vaccine rollout.

Biden has revealed his sweeping mandate to combat the scourge of the disease, including a trillion-dollar plan to ramp-up vaccine manufacturing and distribution.

Meanwhile, President Trump is expected to leave Washington for the last time as commander in chief early Wednesday morning with a departure ceremony at Joint Base Andrews in Maryland around 8 a.m.

He released a farewell video on Tuesday evening wishing the incoming Biden administration luck while celebrating his own achievements over the past four years.

Amid Utah’s COVID-19 surge, conspiracy theorists who do not imagine the rise in circumstances tried to enter a Utah ICU