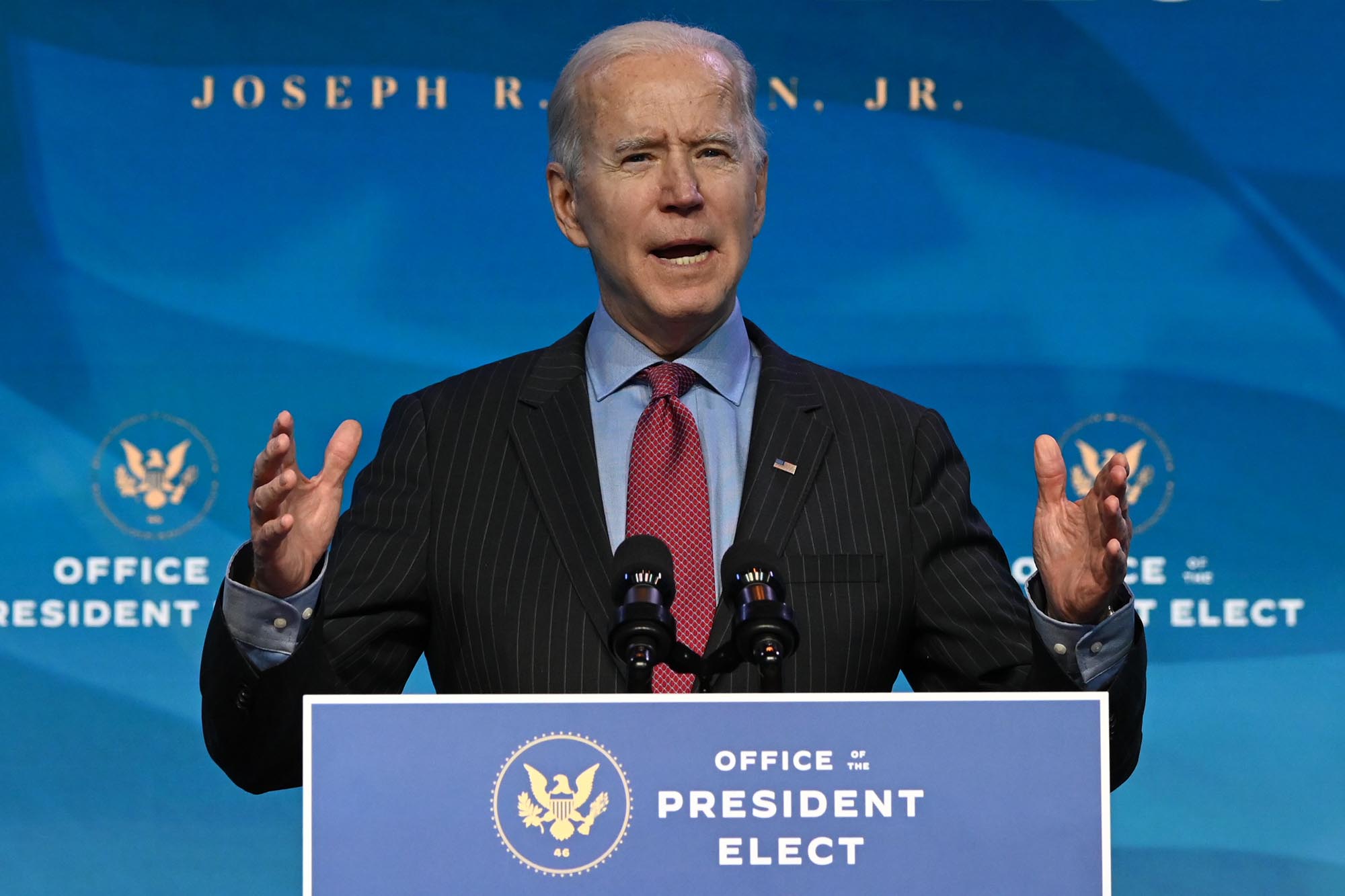 President-elect Joe Biden on Thursday unveiled a whopping $1.9 trillion economic recovery plan for digging out of the coronavirus-fueled economic downturn that he’ll pitch to Congress as one of his first acts as commander in chief.

The big-spending bailout, which he’s calling the American Rescue Plan, proposes $1,400 checks for most Americans, an extension of the eviction and foreclosure moratorium until September and a national vaccination program as local distribution rates continue to fall short.

Republicans in Congress who vociferously opposed a similar $2.2 trillion bailout pushed by House Democrats in October are likely to raise objections to Biden’s package, too.

Biden will address the nation at 7.15 p.m. Eastern Time from Wilmington, Del., in a speech where he is forecast to call on members of Congress in both parties to pass the package.

The bill will be the most pressing piece of legislation on Biden’s agenda as he takes office amid a worsening pandemic that has so far killed 386,000 Americans and infected 23.2 million.

It follows on the heels of a $900 billion bailout Congress passed just last month after months of inaction caused by partisanship.

Still, in an email outlining the president-elect’s rescue plan, the Biden campaign said that package was not enough.

“While Congress’ bipartisan action in December was a step in the right direction, it was only a down payment. It fell far short of the resources needed to tackle the immediate crisis,” the email read.

The balance of power in the Senate will shift later this month when two Georgia Democrats are sworn in for a 50-50 split with Republicans and Vice President-elect Kamal Harris breaking any tie. But Biden will still need the support of some Republicans to avoid a fillibuster through cloture, which requires a 60-vote majority.

If his package is to become law, it’s likely to require some compromise from Biden’s initial grandiose spending plan to win over at least some of the more conservative Senators, worried about the ballooning national debt.

Provisions in the plan include $1,400 direct payments to eligible Americans, in addition to the $600 passed by Congress in December. The Biden administration is describing this as a “down payment” which will take total relief payments to $2,000, something that at least one Senate Democrat has balked at.

Sen. Joe Manchin, a conservative Democrat who is expected to be a key swing vote, has already opposed efforts to eliminate the legislative filibuster, and said he is against such high-dollar checks going to all Americans, preferring more income-targeted payouts.

“That’s not a yes or no question,” the West Virginia lawmaker said Sunday on CNN’s “State of the Union.” “I’m on board by helping people that need help, people that really can’t make it, people that don’t have a job — they can’t put food on the table.”

“Sending checks to people who basically already have a check and aren’t going to be able to spend it or not going to spend it and usually put it in their savings account right now. That’s not who we are,” Manchin said. “We have done an awful lot of that.”

Biden has also earmarked $20 billion for a national vaccine program which will include community vaccination centers and mobile vaccination units to inoculate hard-to-reach communities.

All people in the United States, regardless of their immigration status, will receive the miracle jab for free, the plan says.

The economy is still in a downward trend and last week’s job report showed conditions are actually worsening.

However, the earliest days of Biden’s presidency could be consumed by President Trump’s impeachment trial, which McConnell said Wednesday could not begin until after Trump’s term has ended.

Adding to the maelstrom is the fact that many of Biden’s political appointees will need to undergo the Senate confirmation process, meaning lawmakers could be torn in three equally pressing directions.

COVID-19 deaths up to 8 times more likely among unvaccinated