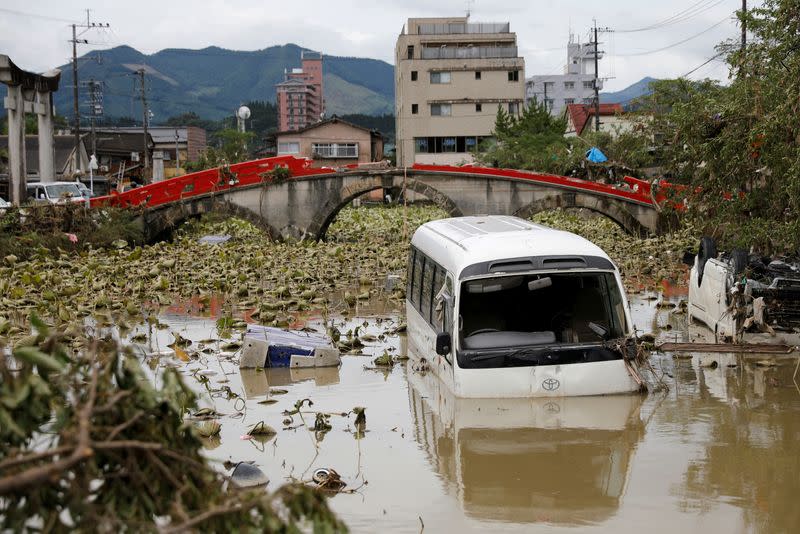 Yatsushiro, JAPAN (Reuters) – Boxes of surgical masks, bottles of disinfectant and a sign saying “Please wear a mask” mark the entrance to a public gym in Yatsushiro city, a shelter for residents fleeing devastating floods in southwestern Japan this week.

Elsewhere in the gym, cardboard partitions separate the 233 evacuees’ sleeping areas and another sign instructs them to check their temperature each morning, then sterilise the thermometers.

The measures show what a thorny issue it is for Japan to deal with natural disasters in the time of coronavirus.

Japanese authorities have been warning local officials for months to include coronavirus measures in their disaster preparations. Residents have been urged to seek shelter with friends or relatives if possible to avoid overcrowding evacuation centres.

But coronavirus contagion was the last thing on the mind of 78-year-old retiree Aiko Ishimura when neighbours knocked on her door on Monday to tell her about evacuation orders.

Ishimura, who lives alone, had planned to shelter at home.

“So we just came as we were. We were in such a rush to come here, we didn’t bring anything,” Ishimura, who fled with neighbours, told Reuters. “I wasn’t worried at all about coronavirus, not at all.”

“We don’t have many cases here in the first place. We don’t really do the whole mask-wearing thing,” she added, although she said she keeps a mask in her pocket.

Kumomoto prefecture, where Yatsushiro is located, has had only 49 of Japan’s more than 20,000 coronavirus cases, according to public broadcaster NHK.

That compares with close to 7,000 in Tokyo, where cases are on the rise again among its 14 million residents.

Misa Matsuda, a 48-year-old nurse, accustomed to the annual floods in the region, had also intended to remain at home. But she was stunned early Monday when she opened her door and found the river flowing just a few feet from her house.

“I thought, there’s no way the water would come up here to our house, where it’s a bit of a hill,” she said.

Matsuda said she wasn’t too concerned about coronavirus because basic steps were being taken, but did worry residents would congregate to chat, creating just the sort of crowded conditions authorities say increase infection risk.

City official Takanobu Ono said the evacuation centre was limited to 300 people despite a capacity for 500. But he said the priority for evacuees was escaping with their lives.

“Some of have just been saved by the skin of their teeth,” he said. “The reality is that coronavirus is less of a concern for them … So we’re taking the measures we have to, but haven’t been so strict about it.”

About 60 people have died or were feared dead from floods and landslides triggered by torrential rains that have pounded the southwestern island of Kyushu, including Kumamoto prefecture, since Saturday. Extreme rain warnings were issued for parts of central Japan on Wednesday.

Disaster experts said persuading people to evacuate early and find alternative shelters was vital, but agreed that convincing people to plan ahead was often tough.

“We kept saying, ‘Check your hazard map,'” said Masako Yoneda of the Japan Academic Network for Disaster Reduction, which issued an urgent warning on the topic in May. “But still, there are people who don’t check.”