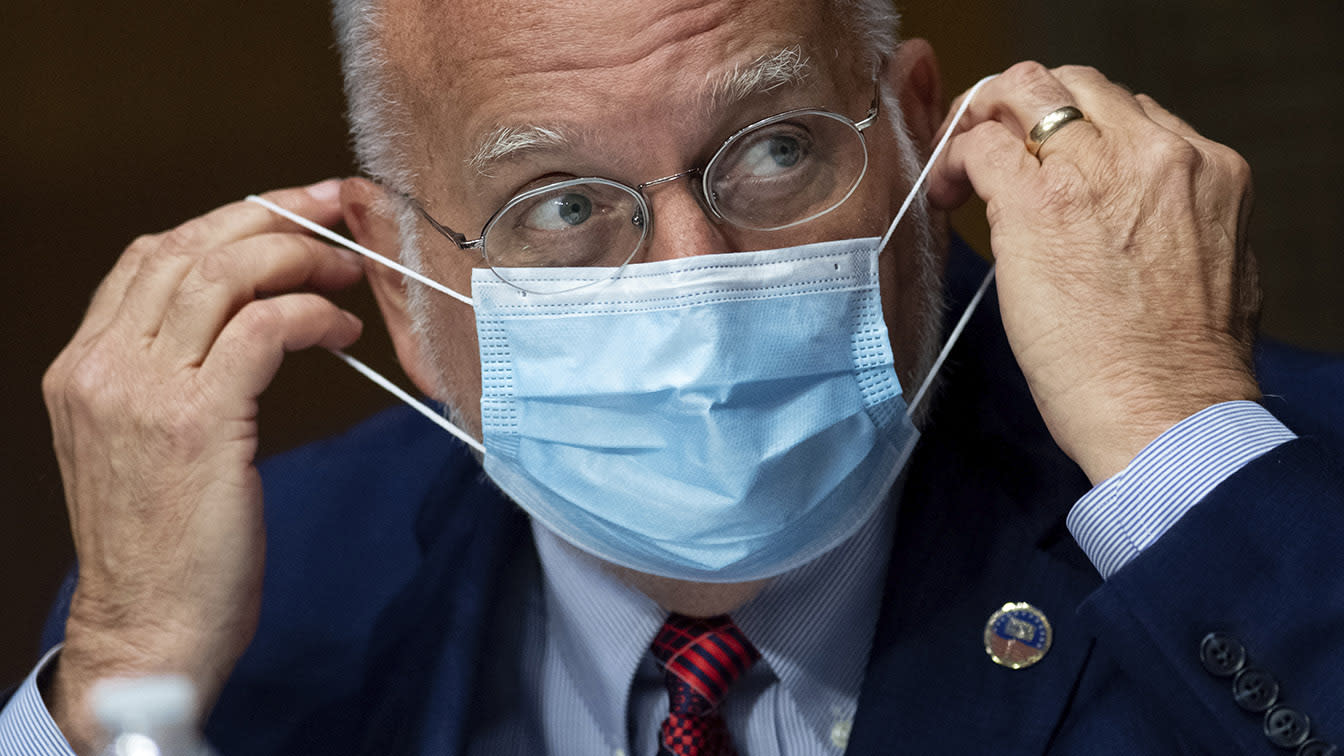 LOS ANGELES — Masks are necessary to combat America’s resurgent coronavirus pandemic. But at this point, they may no longer be enough.

Patterns that have emerged in countries that are faring much better than the United States suggest we won’t bring the virus to heel until we start locking down hot spots as well.

On Wednesday, Dr. Robert Redfield, director of the Centers for Disease Control and Prevention, tweeted: “I believe if everyone, including #Millenials and #GenZ, wear[s] a cloth face covering for the next 4 to 6 weeks, we can get the #COVID19 epidemic under control.”

Redfield’s comments went viral. See? the signal boosters seemed to say. If the rest of you would just behave yourselves, this thing could be over by Labor Day.

In response, Carl Bergstrom, a professor of biology at the University of Washington who has become one of the nation’s top experts on the coronavirus, tweeted back: “I believe that Space Aliens flew many light years across the galaxy to communicate with us by flattening crops in circular patterns.”

Bergstrom’s tweet was cheeky, but his message was clear: While officials like Redfield should absolutely continue to “advocate wearing masks during a global pandemic,” as Bergstrom put it in a follow-up tweet, the idea that masks alone could, in the next four to six weeks, “control” a virus that is currently spreading at a rate of 65,000 new cases per day and killing nearly 1,000 Americans every 24 hours is as fanciful as the plot of M. Night Shyamalan’s “Signs.”

Dr. Robert Redfield, director of the CDC, testifies during a Senate Appropriations subcommittee hearing on July 2. (Saul Loeb/Pool via AP)

Again, masks are crucial. Scientists say they should be mandatory nationwide. On Friday, Dr. Anthony Fauci, America’s top infectious disease expert, urged “local political and other leaders … to be as forceful as possible in getting your citizenry to wear masks,” adding that “masks are really important, and we should be using them — everyone.”

Still, as Bergstrom concluded, telling or even requiring people to wear masks offers “only a partial solution” to America’s raging COVID-19 problem.

The question now is what the rest of that solution should look like. And the answer is that it should probably look more like Europe’s.

At the start of April, the curves of new daily COVID-19 cases in France, Germany and the United Kingdom closely resembled the United States’. In Italy and Spain, the curves were even worse. Yet today, those countries are recording fewer than 15 cases per million residents each day. Italy is accumulating three cases per million daily, while the U.S. is adding 192. The European Union, with a population of 446 million, is adding about 4,000 new cases a day. The U.S., with a population of 328 million, is adding 15 times that number.

So why is life returning to normal in Europe but not in America?

It’s not because of masks. Britons have, by and large, been reluctant to hide their stiff upper lips behind masks; it wasn’t until Tuesday that Prime Minister Boris Johnson finally ended months of equivocation and mandated that people wear masks inside shops and supermarkets. In France, masks won’t be required in enclosed spaces until Aug. 1. And while masking up is now more widespread in Spain and Italy than in the U.S. — 84 percent of Spaniards and 83 percent of Italians say they always cover their faces in public, versus 59 percent of Americans — it wasn’t that way back in April, when the pandemic was peaking there. Even now, fewer people say they always wear masks in the U.K. (19 percent), France (53 percent), Sweden (2 percent), Denmark (2 percent) and Norway (4 percent) than in the U.S.

Germany and America are roughly tied at about 60 percent.

Rather, the difference is that Europe’s springtime lockdowns worked and America’s, broadly speaking, did not. This isn’t to say the U.S. should have locked down longer. There’s no one-size-fits-all model for a lockdown, as the vastly different measures implemented across the EU demonstrate. Finland, for example, never really locked down at all, with authorities advising against, but not banning, nonessential trips while allowing shops to remain open. Residents of Spain and Italy, however, were barely allowed to leave home for more than a month. The U.K. locked down for 83 days.

Yet there was a common thread: making sure the virus had been suppressed to a level low enough that containment was theoretically possible once business as usual resumed. This meant different things in, say, Germany and Denmark, but the goal was the same.

The point isn’t that 1.5 percent is an ironclad guarantee of long-term success. Cases could rise again across Europe, especially when cold weather returns and indoor activity increases this fall. It’s also important to consider how a country manages the virus after reopening. In Israel, the positivity rate fell to 0.3 percent in May. But a rapid reopening complete with massive weddings and in-person schooling has produced another big wave of infections.

Even so, if you want to reopen your country, a positivity rate of 1.5 percent (or lower) seems to be a good starting point — a benchmark to aim for. Ukraine, for instance, reopened when its positivity rate was about 2 percentage points higher than that. Cases soon climbed again.

Unfortunately, America’s positivity rate has never been anywhere near 1.5 percent. In fact, it has not fallen below 4.6 percent since the start of the pandemic. On May 15, positivity stood at 4.2 percent in Florida, 6.5 percent in Texas and Arizona, and 4.8 percent in California — three to four times Europe’s lockdown-ending level. As a result, it didn’t matter how long U.S. stay-at-home orders lasted. They were lifted when there was too much virus still circulating in the population to contain.

Everyone knows what happened next. Today, the positivity rate in Florida is 19 percent; in Texas, 16 percent; in Arizona, 24 percent; in California, 7 percent.

A specimen is secured at a drive-through coronavirus testing site in Phoenix on July 9. (Ross D. Franklin/AP)

There is little evidence to suggest that masks alone can transform Florida’s outbreak into France’s. For one thing, “everyone” is not, sadly, going to wear them, no matter what Redfield says. Remember, this is a country where the president refused to don a mask in public until last weekend; where the White House just said it would not be issuing a nationwide mask mandate; where the Republican governor of Georgia has suspended all local mask mandates and sued the Democratic mayor of Atlanta for not rescinding hers; and where the Orange County, Calif., school board voted this week to send kids back to school without masks in order to model “courage.”

But even if U.S. politics and psychology transformed overnight and Americans started universally masking up like, say, the Japanese, it probably wouldn’t fully turn the tide. One study suggests that before May 22, mask mandates in certain U.S. states may have slowed daily COVID-19 growth rates by as much as 2 percent. Yet over the past month, cases have been increasing nationwide by more than 6 percent a day, on average. In Florida, they’ve been rising by an average of 15 percent a day. In Los Angeles, daily cases have more than doubled over the past month. A universal mask mandate has been in place the entire time.

It’s a myth, meanwhile, that the only reason the virus is spreading is that a maskless “America drank away its children’s future,” as liberal columnist Paul Krugman thundered in Tuesday’s New York Times. “The reason we’re in this position is that states, cheered on by the Trump administration, rushed to allow large parties and reopen bars,” Krugman theorized.

That’s partially true, of course; reopening was a rushed mess. But a more complete explanation — one that accounts for the fact that vulnerable, lower-income Americans, especially Latinos, represent a massively disproportionate number of COVID-19 cases — is that frontline workers have been getting infected on the job before, during and after lockdown, then spreading the disease to their families and communities. Just last week, for instance, a Los Angeles clothing factory was ordered to close after public health investigators found more than 300 confirmed COVID-19 infections and four deaths among garment workers who’d been reclassified as “essential” in order to churn out masks during the pandemic. Unless workers’ exposure to the virus is minimized, positivity rates may remain dangerously high.

The only proven way to reduce such exposure is to lock down — not nationally, but in places like Houston, where the positivity rate recently reached 25 percent, and Miami, where it just cleared 33 percent. In Italy, the positivity rate hit 25 percent before lockdown; in Spain, 28 percent; and in the U.K., 32 percent. All fell below 1.5 percent. All remain below 1.5 percent today.

Closer to home, more than 50 percent of tests in New York state were coming back positive at the start of April. America’s most severe lockdown (and most cautious reopening) followed. On June 9, the state’s positivity rate fell below 1.5 percent for the first time. Today it stands at 1.14 percent.

To achieve that kind of outcome, cities such as Houston, Miami, Phoenix and Los Angeles will have to lock down more effectively than they did in the spring. That might mean allowing fewer businesses to stay open, or more financial support for workers. It might mean stronger stay-at-home enforcement. Eventually it will mean more contact tracing and testing and targeted efforts to stamp out the inevitable flare-ups that will arise after lockdown ends.

But simply “rolling back” reopening by limiting indoor activities such as moviegoing and dining out is probably not going to cut it. The bottom line is that lockdowns need to be as strict and as long as necessary to get to a local positivity rate of 1.5 percent. Anything short of that may just prolong the process.

The good news is that now that we know how important masks are, they can help limit the amount of economic disruption required to get there. Earlier this year, two hairstylists in Springfield, Mo., who later tested positive for COVID-19, saw 139 clients for indoor cuts, shaves and perms lasting 15 to 45 minutes — while they were infected with the virus. Not a single one of those clients (of the 104 who agreed to be interviewed) got sick, and of the 67 who consented to a swab test, every one tested negative. The reason, according to a study released this week, is that the salon had a universal mask policy — and everyone, including both stylists and all 139 clients, followed it. This suggests that if new lockdowns are paired with mask mandates — and residents obey those mandates — some small businesses that might have closed in April can remain open.

At every phase of this pandemic, U.S. leaders have lagged a few paces behind the pathogen. On Thursday, Gov. Gavin Newsom of California, a proactive executive in one of America’s most proactive states, implied that if his constituents would simply grow up and cover their faces, they could “crush this curve” — a curve that recently cleared 10,000 new daily cases for the first time.

“Don’t be selfish — Wear a mask,” Newsom tweeted. “We can crush this curve, but we have to do it TOGETHER.”

Don't Miss it Kellyanne Conway says Trump ought to resume coronavirus briefings as a result of ‘individuals need info’
Up Next Coronavirus: What’s a pandemic and why use the time period now? – BBC Information