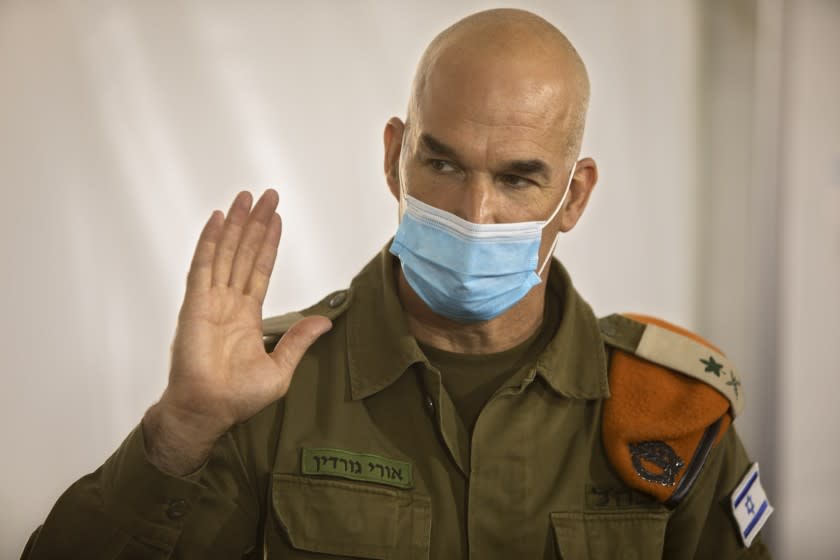 Israel is far outstripping other countries in vaccinating its population against COVID-19, an extraordinary achievement hailed by public health experts at home and abroad, and one that could propel it toward coveted herd immunity more rapidly than almost any nation.

But Israel is also under criticism for leaving behind the nearly 5 million Palestinians under its control in the West Bank and Gaza Strip, who are expected to wait considerably longer for mass inoculation.

In less than three weeks, Israel has vaccinated almost 15% of its 9.3 million people with the first of two doses of the Pfizer/BioNTech vaccine, dramatically outpacing the rollout in the United States and much of Europe, in terms of population size. By comparison, the U.S. rate hovers below 1.5%, according to data compiled by an Oxford University vaccination-tracking site.

With vaccines being administered to more than 150,000 people a day in Israel, those groups that have been given priority to be inoculated — healthcare workers and citizens over 60 — are expected to receive their second shots by late January, even as the country battles a ferocious new wave of infections.

The much-vaunted vaccine rollout may allow Prime Minister Benjamin Netanyahu, running for reelection while on trial for bribery, fraud and breach of trust, to improve his faltering poll numbers and turn aside harsh criticism of his overall management of the pandemic response. The prime minister was the first in the country to receive the vaccine, baring his arm on live television last month and encouraging others to get the shot.

With a March election on the horizon, the vaccine campaign’s initial effectiveness is already giving Netanyahu a chance to hold out the prospect of a speedier economic recovery. On Monday, the Bank of Israel issued an improved assessment of Israel’s 2021 outlook, foreseeing the economy shrinking by less than 4%, instead of its initial estimate of 6%, if the rapid pace of inoculation is maintained.

Along with Israel’s small size and its tech-savvy ways, the country’s long-established, highly digitized national healthcare system is being given much of the credit for the early rollout success. By law, every Israeli citizen must register with one of four health maintenance organizations, which are heavily subsidized by the government.

Public health, from early childhood vaccinations to eldercare, is based on a network of community clinics present in almost every Israeli locality. This socialized system has decades of experience with outreach and logistics, and there is an existing national vaccine registry, initially set up to track common childhood inoculations.

Another key factor in the initial vaccine triumph has been aggressive procurement. When Pfizer became the first maker to certify the efficacy of its vaccine, Israel was reported to have paid up to double the price paid by European countries, and up to three times the price paid by the United States, to secure delivery of an estimated 8 million initial doses.

Israel rejects the position espoused by some aid groups that it is responsible for civilian populations under its control, saying that 1990s peace accords place the onus for providing healthcare, even in a public health emergency, on Palestinian officials.

A consortium of 15 Israeli and Palestinian human rights organizations has called on Israel to ensure that vaccines that meet the rigorous standards of the Israeli health system be procured and delivered to Palestinian lands as soon as possible.

Israeli officials have said some leftover vaccine doses may be donated, but there are no formal plans in place. Health Minister Yuli Edelstein said Israel’s first responsibility is to its own citizens, but some argued it bore additional moral and perhaps legal responsibility.

“I am so proud of how well our HMOs have provided vaccinations to Israelis, including the Palestinian citizens of Israel and residents of occupied East Jerusalem,” Israeli lawyer and activist Daniel Seidemann said in an online posting. At the same time, he said, “I am so ashamed of how we’ve failed to provide vaccinations to the Palestinians we occupy in the West Bank and Gaza.”

Palestinian Arab citizens of Israel, who make up about one-fifth of the population, are included in the national vaccination drive. Netanyahu and other officials traveled on New Year’s Day to the predominantly Arab town of Umm al-Fahm, in northern Israel, for a news conference marking the millionth vaccination.

Jewish settlers living in the West Bank are receiving vaccines as part of the Israeli government push, while Palestinians in neighboring villages are not. Palestinian officials hope to begin providing some vaccinations next month, though the effort is likely to be far slower than on the Israeli side.

A few West Bank Palestinians who work across the line are receiving the vaccine. Walid Nammour, the chief executive officer of Augusta Victoria, one of East Jerusalem’s six main hospitals, said that 70% of his staff would be vaccinated by Thursday. Of those, he said, nine in 10 are from the West Bank.

Nammour described the Israeli approach as shortsighted, because so many Israelis and Palestinians live or work in close proximity.

“It doesn’t help Israel, because if everyone in Israel is vaccinated and Palestinians in the West Bank are not, the pandemic will not be controlled,” he said.

Coinciding with its rapid vaccine rollout, Israel is facing tight new restrictions aimed at stemming what has become a massive new outbreak of coronavirus cases. Infections in Israel have risen to nearly 450,000, with more than 3,400 deaths.

The government is poised to approve a fourth national lockdown, which will keep people in their homes, shut schools and workplaces and once again paralyze the economy. Complicating matters, Israel has identified more than 30 cases of individuals infected by the contagious variant of the coronavirus first identified in Britain.

“The rate of contagion is catastrophic,” said Edelstein, the health minister.

Some experts, though, said fear of contracting the virus could help dispel any lingering doubts among vaccine skeptics, paradoxically boosting the inoculation drive.

“When infection is high, people are motivated to get the vaccines,” said Dr. Hagai Levine, a Hebrew University epidemiologist and chairman of the Israeli Assn. of Public Health Physicians. “Less people fall into thinking, ‘It won’t happen to me.’”

Many Coronavirus Cures that Shocked Us

Coronavirus Fatigue is Fueling Defiance in Tokyo, At the same time as Instances Proceed to Surge