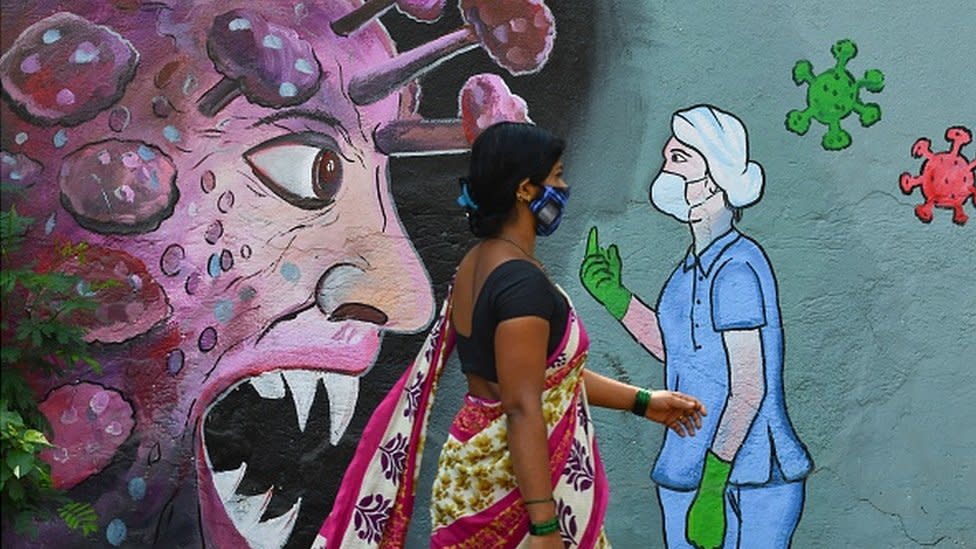 Daily Covid cases in India have dropped to an average of 32,000

A top scientist from the WHO recently said that India may have reached the endemic stage of Covid-19. The BBC’s Zoya Mateen explains what this means for the country’s fight against the virus.

Dr Soumya Swaminathan, the World Health Organization’s (WHO) chief scientist, on Tuesday said that India seems to be “entering some stage of endemicity”.

A disease is described as endemic when it continues to be present within a given geographical area but its impact is manageable.

Her remarks come at a time when India has eased restrictions amid a fall in its Covid-19 caseload. The number of daily cases has fallen from a peak of 400,000 in April to about 25,000 this week.

But experts continue to advise precaution, saying the possibility of a third wave still looms. And given the threat of new variants and India’s vast population, a timeline for when India actually reaches the endemic stage remains an open question.

Will there be a third wave?

The answer largely depends on how soon India can officially declare that it has reached the endemic stage.

In an interview with the Wire news website, Ms Swaminathan said that India – like several other countries – was reaching a stage where there “is low level of transmission”, unlike the “exponential growth and peaks that we saw a few months ago”.

The endemic stage of any disease is reached when a large section of the population becomes immune to a disease – either through vaccination or through antibodies acquired from a prior infection.

At this state, the spread of the disease starts to slow down, explains epidemiologist Dr Lalit Kant.

Ms Swaminathan suggested that although India would continue to experience “ups and downs” at a regional level, it’s unlikely to see another overwhelming surge in infections like it saw during the second wave when patients suffered from acute shortages of hospital beds and medical oxygen.

She added that given India’s heterogenous population, there would be localised peaks among people “who were perhaps less affected by the first and second waves, or in areas where there is low vaccine coverage”.

However, she said “there is no crystal ball” to predict with certainty “when, where and how bad a third wave will be” and “all one can do is make an educated guess”.

What does the government say?

The government has been asking people to stay cautious.

India has reported more than 32 million Covid cases since March last year, second only to the US. Official figures show that over 435,000 people have died, but experts say the real figure is likely to be much higher.

There is no doubt that India’s caseload has come down.

But government experts have repeatedly warned that a third wave is still very much a possibility if officials and people stop being cautious. A government panel recently said the next wave could peak as early as October.

Experts say the government is repeatedly issuing warnings because it was heavily criticised for failing to predict the second wave.

In March, the government declared that the country had won its fight against the virus – just weeks before the second wave caused mayhem across the country.

Can the virus be eradicated?

It’s hard to predict the future of Covid-19 accurately, but scientists say there is little reason to believe that the virus will go away any time soon.

However, scientists say it is possible the spread of infection will eventually stabilise to a level where it will be present among people, but at a relatively low and predictable rate. The number of people needing hospitals will decline and severe cases will become rare, experts say.

“The disease transmission continues and people still get infected, but not at a level that causes public health concern,” said virologist Jacob John.

India saw a crippling shortage of oxygen during the second wave

He added that the endemic stage would mean that the virus would become like common flu or malaria.

“It will flare up among people in regular intervals but it will not upend lives,” he said.

“We cannot reasonably hope to eliminate or eradicate the virus, but once it becomes endemic we can learn to live with it.”

How soon will India be in endemic stage?

Experts say it is too early to say.

“As more and more people get infected or vaccinated, you will see infections happen but you will not see a lot of disease happen.”

“This has happened in the UK where over 60% of the population is fully vaccinated. And there are very few severe infections and deaths, even as the overall infections remain high,” he added.

But in a vast country like India – where less than 15% of its eligible population of nearly a billion people is fully vaccinated – experts say it is hard to say if this will “happen in six months and next year or even later”.

Mr Kant said that as long as people are susceptible to infection “we cannot arrive at that stage as outbreaks will continue to happen”.

India has administered more than 590 million doses of vaccines

If there is a variant more infectious than delta, that strain could circulate quite widely even in a population that has either been infected or vaccinated, Mr Jameel explains.

“Newer variants will be escaping immunity, and for as long as that happens, you can never claim the virus is in the endemic stage,” said Mr Kant.

This is particularly a cause of concern for India, where a large number of people are still vulnerable to the virus.

According to Mr John, trying to label a heterogenous country as an endemic population may not be accurate at the moment.

But the larger takeaway from Ms Swaminathan’s statement is “that we should learn to live with the virus not that we should get complacent”, he said.

“An endemic disease can turn into an epidemic with change in virus or our behaviour. We are never going to get back to 2019.”