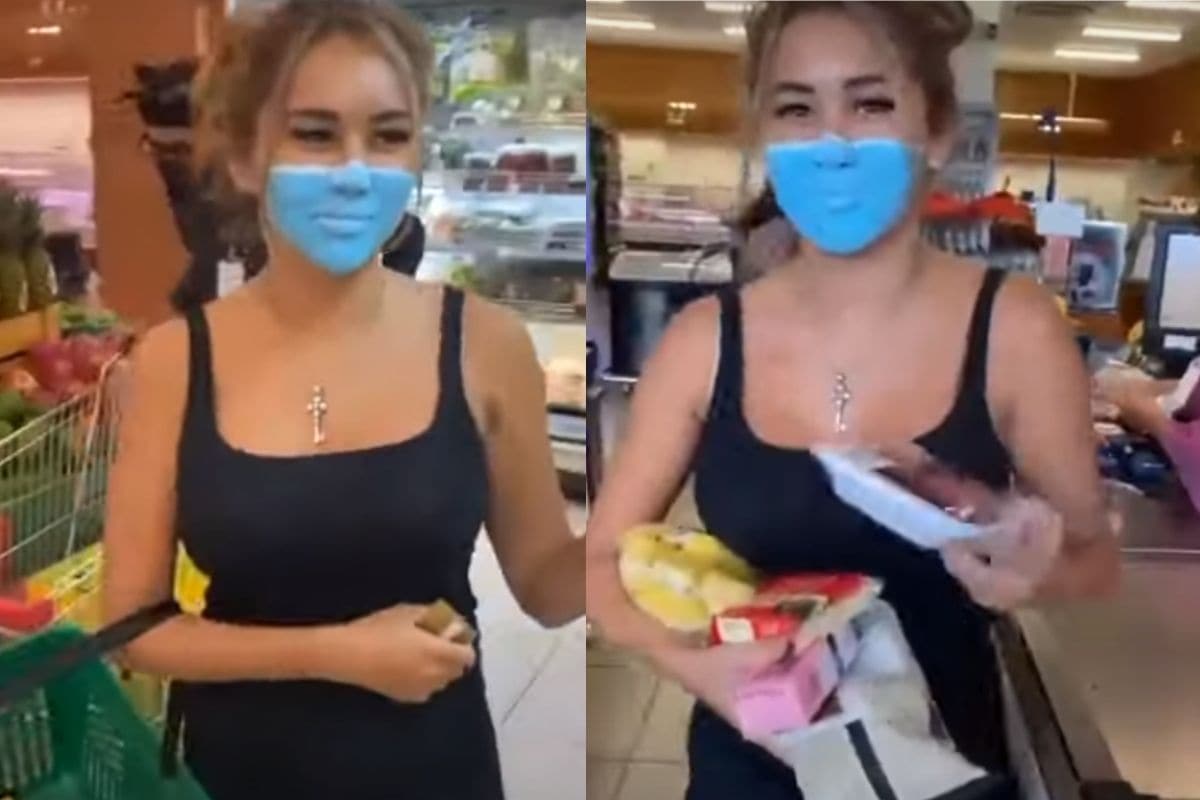 Authorities in Bali have allegedly seized passports of two social media influencers after the duo posted a prank online of one of them sporting a painted face mask rather than actually wearing one at a supermarket in Bail. The duo who claimed to have done the same only to create content and entertainment for their followers, now are facing the possibility of deportation too. In the video that had immediately gone viral but also faced a lot of backlash from locals, Josh Paler Lin and Leia Se are seen trying to enter a supermarket in Bali where the latter is not wearing a mask. The guard stops them, so the duo return to their car and Lin uses blue paint to raw a blue surgical mask, with white straps and everything and looks believable as long as Se doesn’t speak.

The duo then again comes back to the supermarket where they easily hoodwink the guard and get inside the store and to try and avoid being caught, Lin tells Se, “You can’t talk.”

Se whispers in the video as to how she can’t believe that ‘this works!’.

The video sparked off outrage on social media and people lashed out on the duo for their irresponsible act. Lin and Se, who hail from Taiwan and Russia respectively, now reportedly face deportation because of flouting Covid-19 rules. Their passports have reportedly been seized by authorities already, reports said.

In a video posted on Instagram, the duo were seen apologizing formally for their actions with an attorney by their side.

“We want to apologize for the video that we made,” they say. Lin continues, adding that the video was never intended to “disrespect” or “invite” people to disregard mask wearing rules. “I made this video to entertain people because I’m a content creator, and it is my job to entertain people. However, I did not realize that what I did could actually bring a lot of negative comments and raise concerns.” The duo promised to not do it again.

The tourist island has had a grim Covid-19 situation as it saw 1.63 million cases and over 44,000 deaths from the infection. Foreign nationals caught not complying with mask guidelines face a fine of IDR1 million (Indonesian Dollar Rupiah), or US $68.76. After a second violation, they may be deported.

Recently, foreigners caught not wearing face masks in Bali were also being subjected to push ups. Video footage circulated on social media showed tourists in T-shirts and shorts being made to do the exercise in sweltering tropical heat as masked security officials stood over them.

Recently, a Delhi couple went viral on social media after they were filmed arguing with a police officer who stopped them for flouting weekend curfew and not wearing a mask inside their car. A case was also registered against the duo for flouting the rules and for misbehaving with the cops too.

mRNA Know-how Gave Us the First COVID-19 Vaccines. It Might Additionally Upend the Drug Business

Pooja Bedi Trolled for Boating in Goa with out Masks, Asking Folks to Free Thoughts from Worry amid Covid-19

NRA lays off staffers and cuts pay during coronavirus pandemic