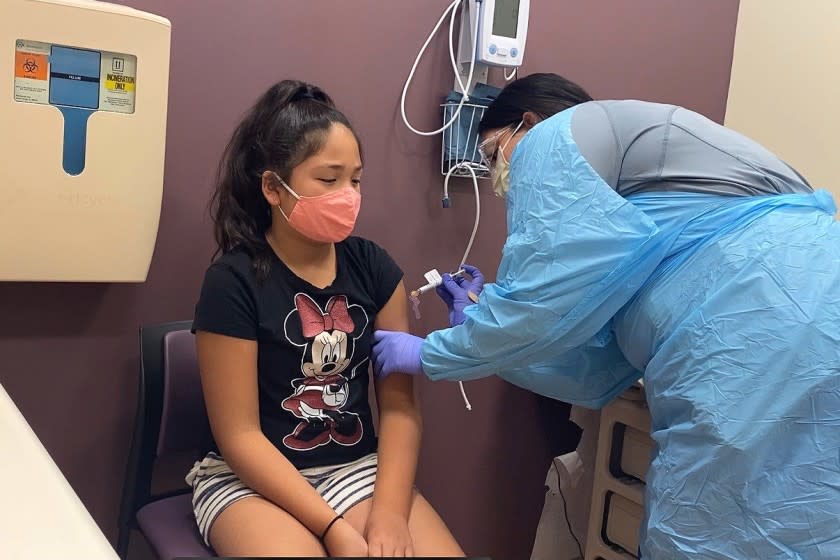 If the Food and Drug Administration continues on its current path, a COVID-19 vaccine for children under 12 probably won’t be available until early 2022 — an eternity in this pandemic. Kids infected by the highly contagious Delta variant have overwhelmed children’s hospitals in parts of Florida and Texas. A record number of children — more than 1,900 — are hospitalized in the U.S.

Unless younger children are vaccinated, more school outbreaks will occur, leading to repeating cycles of closures, quarantines and reopenings. Those who have lost one year of school may lose another, with children from low-income families and students of color continuing to suffer the greatest educational losses.

In a letter to the head of the Food and Drug Administration, the American Academy of Pediatrics argued early this month that the FDA can move faster in granting emergency-use authorization, or EAU, for children ages 5 to 11 — without compromising safety.

Initially, the FDA wanted to review two months of children’s post-vaccination safety data, the same as was required for EUA for adults. In July, the FDA stated it wanted up to six months of data. The American Academy of Pediatrics says it sees no “biological plausibility for serious adverse” events after two months of children being vaccinated. Evidence gathered from already-vaccinated adults and adolescents backs this up.

Moreover, months after Moderna’s and Pfizer’s Phase 3 trials had already started, the FDA demanded that the number of children participating in the studies be doubled. This will cause further delay for little gain. Greater size isn’t needed to detect common side effects such as injection site soreness and temporary fever.

The more concerning side effects seen in kids 12 to 15 and adults are so uncommon that doubling the size of the trials wouldn’t pick them up. The American Academy of Pediatrics urges the FDA to grant EUA “based on data from the initial enrolled cohort,” not wait for the results from the expanded study.

The FDA made these go-slow decisions in pre-Delta days, when COVID risk was far lower, and we thought there was little risk of transmission from children to vaccinated adults. But the world has changed. The American Academy of Pediatrics unequivocally says that the FDA should not wait to authorize vaccines for children ages 5 to 11 and urges the agency to base the decision on the two months of data that have already been collected.

Rare cases of heart inflammation (myocarditis and pericarditis) have been linked to the Pfizer-BioNTech vaccine. Researchers estimate that for every 1 million second doses given to boys ages 12 to 17, 70 or fewer myocarditis cases — mostly mild — could be caused, but 215 hospitalizations and two deaths could be prevented. Risk for girls is even lower.

The rise of the Delta variant makes this small risk worth taking, according to the American Academy of Pediatrics.

The FDA should allow EUA to go forward without requiring up to six months of safety data and a significant increase in the number of kids in Phase 3 studies. This would permit Pfizer to seek emergency use authorization for younger children in September, as it had originally planned, and receive authorization soon after, far before the FDA’s projected “midwinter” date.

The Pfizer vaccine for those 12 and older is expected to receive full FDA approval this week, possibly Monday, which would allow doctors to prescribe it to children under 12 in what is called “off-label usage.” This could lead to yet another COVID-related health disparity, since the vaccination advantage is likely to go to the children of parents who have the time and money to seek out physicians offering such vaccinations.

Extensive off-label vaccination might not emerge if the FDA speeds up the authorization process of the vaccine for younger children. Parents who want to wait for more data could still do so — the safety evidence that will emerge from millions of children who would now be vaccinated.

Finally, the FDA can move more quickly in reviewing an EUA application for ages 5 to 11. Emergency use authorization is based on the totality of scientific evidence, which includes the evidence on biologic pathways, manufacturing quality and side effects that the FDA already possesses from the COVID vaccines authorized for adults. Israel, which has outstanding data on the Pfizer vaccine, is pushing the company to quicken the submission of its EUA application for children under 12.

When Pfizer’s EUA application is submitted, the FDA should be prepared to convene its advisory panel quickly to greatly shorten the time needed for authorization. The FDA moved quickly to authorize emergency use of the vaccines for adults in late 2020, and again for children ages 12 to 15 earlier this year. That was the right move in both cases.

If the FDA returned to its original vaccine timeline for kids ages 5 to 11, it would be government responsiveness at its best.

Bernard Black is a professor of law and finance at Northwestern University.  He has researched the effect of the pandemic on mortality rates, especially in low-income communities. Martin Skladany is a law professor at Penn State University. His recent work has focused on health disparities.