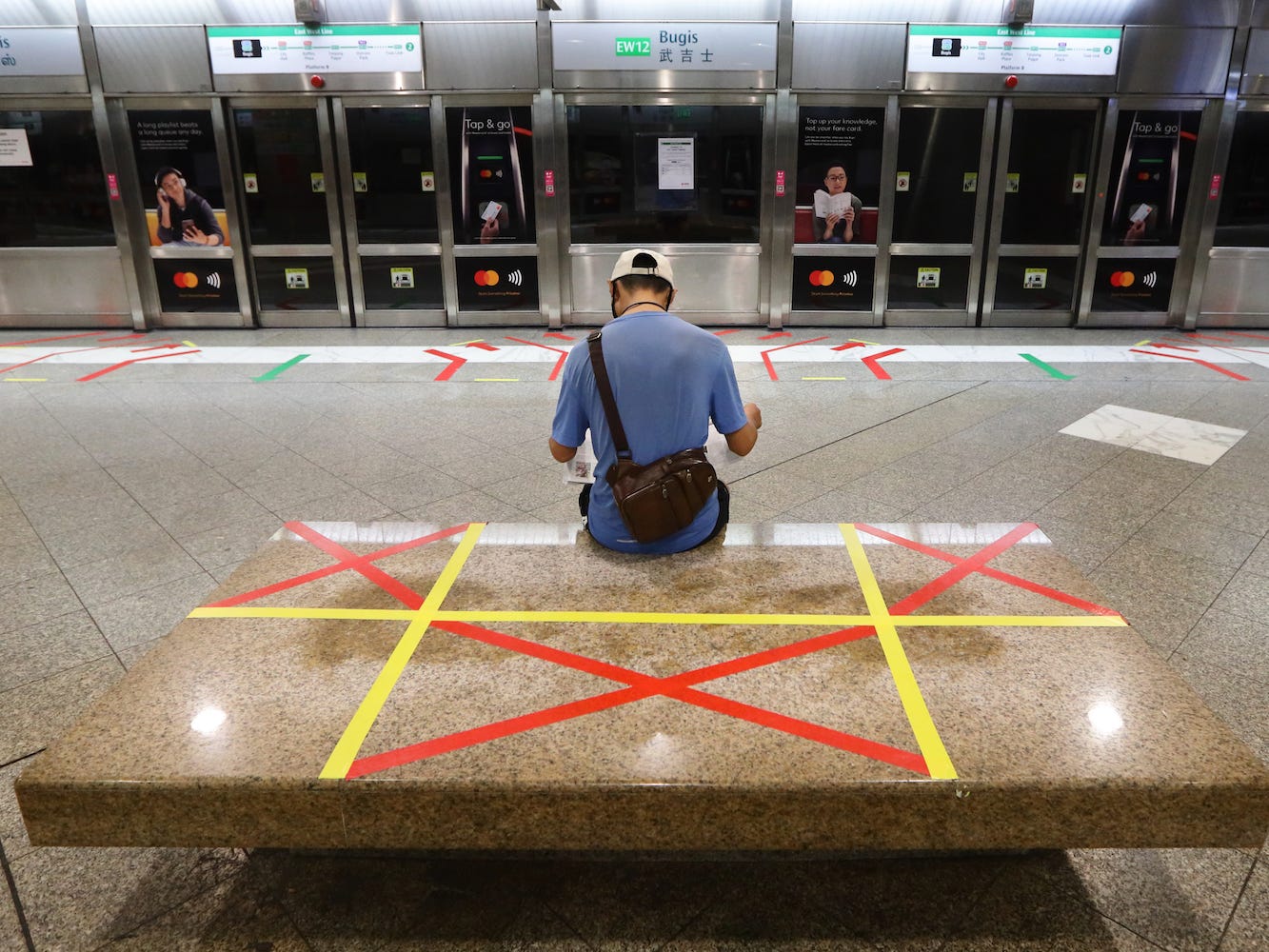 A man reading a newspaper sits on an unmarked safety distancing marker at a train station on April 21, 2020 in Singapore.

Singapore’s quick and efficient response was widely hailed as a success story in the early stages of the world’s coronavirus outbreak.

While other countries were imposing strict lockdowns, the city-state implemented a partial lockdown.

But in the last few weeks, it has witnessed the second wave in new coronavirus cases, reportedly coming from clusters found in cramped migrant dormitories.

Tens of thousands of migrant workers, who live in cramped dorm rooms, have been asked to quarantine in reportedly unhygienic conditions.

The rise in new infections has led the government to clamp down on people’s movement even further, announcing this week that stricter measures would be put in place until at least June 1.

Related Video: Why Some Viruses Jump From Animals To People and Some Don’t

As many countries around the world struggled to contain the coronavirus outbreak, Singapore seemed to be on top of the crisis.

For weeks, the Asian country recorded a low number of infections and implemented only a partial lockdown, which involved banning international arrivals and clamping down on large public gatherings, but keeping schools and restaurants open.

But at the beginning of April, things took a turn for the worse after new clusters of infections were found in cramped migrant dormitories in the city-state’s outskirts.

Since then, Singapore has recorded more than 3,000 cases in the last four days alone, forcing the government to impose even stricter measures than before, according to The Guardian.

Scroll down for an overview of the country’s response so far.

As the coronavirus spread around the world, Singapore — one of the first countries to report cases outside China — appeared to be on top of the crisis.

Tourists walk in a largely empty Chinatown in Singapore on February 21, 2020.

After it recorded its first case on January 23, which came after a man from Wuhan traveled to Singapore, the country reacted quickly and aggressively.

A couple walk past a temperature screening check at Changi International Airport in Singapore on February 27, 2020.

The city-state closed its borders to all foreigners, ramped up public awareness campaigns, and meticulously tracked anyone who might have the virus.

A traveller wearing a face mask walk towards the taxi stand at the arrival hall of Changi Airport on March 23, 2020 in Singapore

The country, which saw 33 deaths during the 2003 SARS epidemic, seemed prepared.

On February 1, it banned anyone who had been in mainland China from entering the country. Two weeks later, it closed the border to all foreigners.

And on March 27, the Ministry of Health said that people who don’t social distance properly or who meet in groups with more than ten people would face a fine or jail time.

The government also used a smartphone app and set up an entire team dedicated to rigorously tracking people who may have been exposed to the virus. Here’s how the system works.

If someone displayed even the mildest of coronavirus symptoms, they were immediately sent to a hospital and quarantined there.

An ambulance leaves Singapore’s National Centre for Infectious Diseases, where coronavirus patients were being housed, on April 3, 2020.

People mingle over food and drinks at a restaurant on March 25, 2020 in Singapore.

Until then, it seemed like Singapore — which has a population of 5.7 million and is only slightly larger than Texas — had mostly contained its initial wave of coronavirus cases.

People wearing protective masks stand apart from each other on the escalators in Singapore’s Sim Lim Square, a popular consumer electronic mall, on April 6, 2020.

But in early April, it started witnessing a second wave of infections. In the last four days alone, more than 3,000 cases have been reported — making it the country with the highest number of cases in south-east Asia.

Singapore’s Marina Bay Sands resort lights up in tribute to healthcare workers and people staying home to curb the spread of the coronavirus on April 10, 2020.

Many infections have been traced back to poorly-kept, crowded migrant dormitories located on the fringes of the city-state, which have been described as a “time bomb waiting to explode.”

A general view of S11 Punggol dormitory in Singapore on April 7, 2020.

Ministry of Manpower Singapore/Handout via Reuters

Tommy Koh, a Singapore lawyer and former diplomat, wrote on Facebook: “The dormitories were like a time bomb waiting to explode. The way Singapore treats its foreign workers is not First World but Third World.”

“The government has allowed their employers to transport them in flatbed trucks with no seats. They stay in overcrowded dormitories and are packed likes sardines with 12 persons to a room,” Koh added.

One of the worst-affected dorms is a massive complex called S11 Punggol. The facility houses more than 300,000 migrant workers from Bangladesh and India, who live in cramped rooms with bunks for up to 20 men.

Migrant workers look out from their balconies at Punggol S11 dormitory in Singapore on April 6, 2020.

On April 5, this block, alongside 19 others, was put on quarantine. The men living there now get food delivered to them and are only allowed to leave their rooms to use the bathroom.

Workers pass a row of pairs of jeans hung to dry at Punggol S11 workers’ dormitory in Singapore on April 6, 2020.

For most workers — many of whom work in construction and manufacturing — the days are now spent talking with family members back home and streaming movies on their phones.

People wearing face masks are seen in a quarantine room in Westlite Toh Guan dormitory, as the outbreak of the coronavirus disease (COVID-19) continues, in Singapore April 7, 2020

Ministry of Manpower Singapore/Handout via Reuters

Many of the men living there get paid as little as 20 Singaporean dollars ($14) a day for manual jobs in construction, estate maintenance, and manufacturing.

While some workers praised the government’s response, others complained about the lack of precautions and bad sanitation that remain in the dorms.

Snacks are packed for migrant workers at S11 Punggol in Singapore on April 15, 2020.

Ministry of Manpower/Handout via Reuters

One worker told Reuters: “Dormitories are crowded and dirty. No wonder the dormitories have become a hotbed for coronavirus infection. Now we are paying the price.”

The situation in the blocks has also caused public outcry, with thousands of people signing a petition raising awareness around the issue, according to a tweet by Kirsten Han, a Singapore journalist and activist.

In early April, Singapore’s government admitted to facing “challenges” relating to the dorms’ hygiene and food supply, but promised to improve them, according to Reuters.

Han reported on April 9 that the food supplies seemed to have improved.

The “clusters” in the dorms account for more than 75% of Singapore’s total number of infections right now.

Migrant workers are pictured outside their rooms at a dormitory in Singapore on April 21, 2020.

As the country witnessed its new surge, the government intensified its lockdown. On April 3, it announced new “circuit breaker” measures, meaning new restrictions and rules to stem the outbreak.

A man walks through a hawker center, where the seats have been cordoned off, in Singapore’s Chinatown on April 21, 2020.

This includes closing all non-essential businesses, schools, and restaurants.

A man reading a newspaper on a social distancing marker at a Singapore train station on April 21, 2020.

At the time this announcement was made, the government said that these measures would be in place until at least May 4, according to a government website.

On April 21, the country extended its lockdown measures to June 1. It does not appear to have controlled its surge yet.

General view of empty roads with the Singapore Flyer in the background on April 19, 2020.

Singapore Prime Minister Lee Hsien Loong said in a televised address:  “Many will be disappointed by the extension. But I hope you understand that this short-term pain is to stamp out the virus, protect the health and safety of our loved ones, and allow us to revive our economy,” The Guardian reported.

At the time of writing, the country has more than 10,000 confirmed coronavirus cases and 11 deaths, according to Worldometer.

How 18 totally vaccinated residents caught COVID-19 in a KY nursing residence. One died.