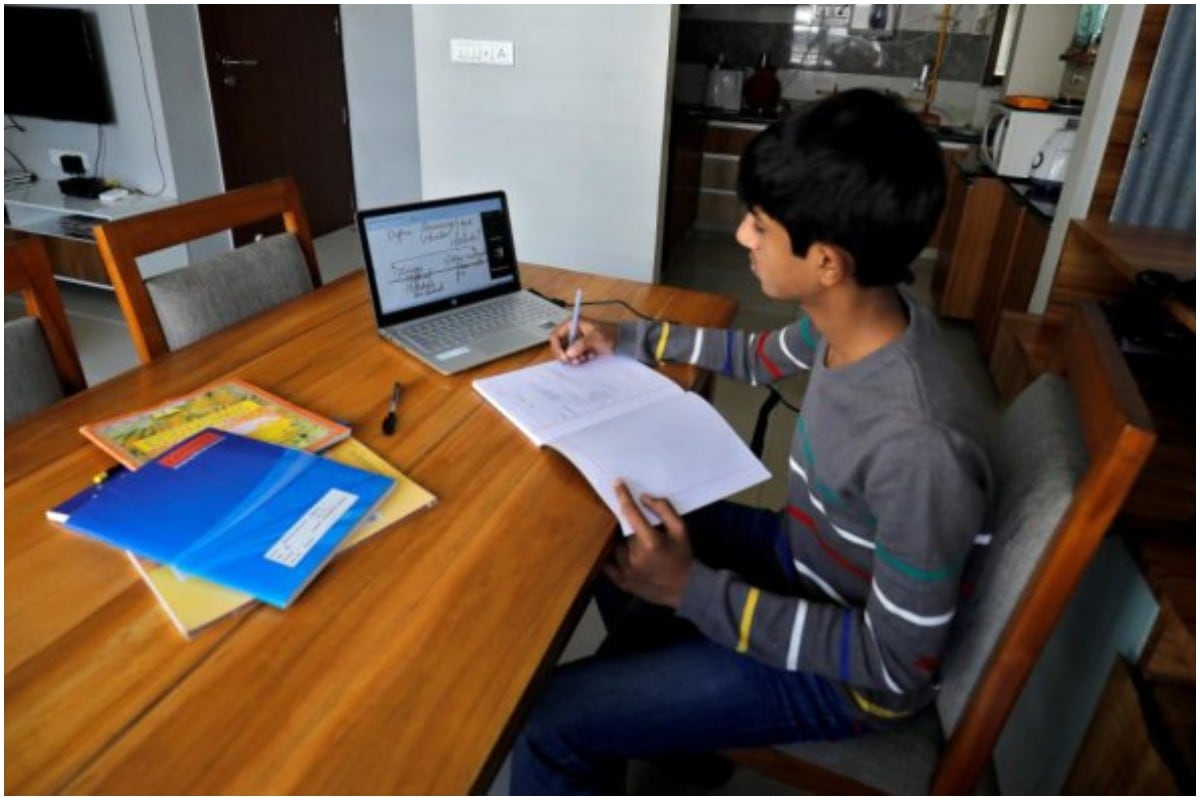 Vivan Sen, a student of standard 4 at Bombay Scottish (Mumbai), has adapted well to his online classes in the past year. His mother, Triparna Banerjee Sen, a Chartered Accountant by profession, told News18.com, “After the initial challenging period, Vihaan has settled into his new routine, but he does miss meeting and playing with his friends, especially during recess hours, and his daily school bus rides.”

“Things like birthday parties and co-curricular activities are also hard to replicate in a virtual environment,” added Sen. During this past year, Vivan’s exams were conducted online, and Sen said his school did a ‘phenomenal job’ at making the transition smooth. She is concerned about the inordinate amount of time her son is spending online these days, but she is also aware that it is a privilege few children can afford in India.

Last year, when the COVID-19 pandemic forced children to abandon their playgrounds and classrooms and made youngsters bid farewell to their college campuses, the divide between the privileged and the marginalized began to grow exponentially. For students, this growing divide became most evident in the way they accessed their education online.

According to a survey conducted by Learning Spiral (published earlier this year), more than 50% of Indian students in both rural and urban areas don’t have access to the internet.

“The problem of access is far from over. Online schooling is ongoing, but it isn’t available easily for every child. There are many children who have lost out during the last year, in terms of education opportunities because either the families didn’t have resources, or they had to use a shared device at home,” said Chetna Duggal, an Associate Professor at the School of Human Ecology in the Tata Institute of Social Sciences.

However, that alone is not the only issue that students faced during this time. According to a survey conducted jointly by Child’s Rights and You (CRY) and Tata Institute of Social Sciences (TISS) on 821 children aged 9-17 years, across 13 cities, it was found that one in every four children cited financial problems to be one of the most significant stress factors during the COVID-19 months.

Duggal, who was also associated with the survey, told News18.com, “We have found in the study that students coming from low-income households have a higher level of trauma and stress because apart from the obvious stressors that the pandemic has introduced in students’ lives, these children also have to deal with a grave financial uncertainty.”

The crest and trough of the pandemic have only added to the anxiety of students in the past year. Schools that reopened in January this year had again gone back to online teaching in several states due to the rising cases. Likewise, in the past months, colleges that had allowed students to come in for practical classes are wary of continuing them, especially in states like Maharashtra.

However, in some states, schools are slated to open soon. According to the SMILE Foundation survey published recently, as schools plan to reopen, 39% of students are unaware of school reopening guidelines. Seema Kumar, Programme lead at Smile Foundation, pointed out that the 26,860 students who had been surveyed by the SMILE foundation generally come from low-income households, and even though they depend heavily on mid-day meals, during the survey, almost 52 per cent of them said that they are hesitant to consume it.

“The survey that we conducted consists of government schools and education centres run by our foundation, and this is perhaps the first of its kind survey that kids themselves have filled out. In this survey, the paradox of their eagerness and hesitancy to return to school is evident,” said Kumar.

It is also the first time our education system has encountered a pandemic, so there isn’t any template to deal with it. Decisions are being taken depending on the spreading cases of COVID-19 in different cities and states. However, in the meantime, students are having difficulty adjusting to this transient phase when exams are being postponed, and the admission process is stalling.

Rafiya Shaikh, a student of standard 12 at Raheja College Mumbai, finally has the dates of her upcoming HSC exams, April 23rd. In an interview with News18, Shaikh said she is anxious not only about her upcoming exams but also about her college admissions.

“When we had regular offline schools, if I did not understand something, I could always ask my friends, and they would explain. Also, in offline classes, teachers understand instantly if you do not get something, so they come to you to explain, but in an online mode, it doesn’t work like that,” said Shaikh

“I constantly feel like I haven’t prepared enough, and it has been challenging for me to motivate myself and study alone,” she added. After passing school, Shaikh wants to study computers and has been researching colleges, and courses but she said that given the added uncertainty due to COVID-19, she fears that her admission process with also be riddled with stress.

Those who are already in college are facing different challenges of their own. Lakshmi S Bhaskar, a student at the Centre for Equality and Justice for Children at TISS, said that this past year has already been a time of curtailed freedom and a feeling of isolation.

“Although it is great to be back with family, after doing your graduation away from home, and living on your own terms for years, when you suddenly have to return to your home for such a long span, and you constantly have to stay indoors, it obviously takes a toll on your mental health, “said Bhaskar.

“It becomes frustrating at times, and problems or issues which otherwise would not have surfaced also becomes a bone of contention. But I have got to spend time with my brother with whom I am very close, so that’s the upside,” she added.

Bhaskar said that the problem isn’t just the sudden change from campus life to online classes but the burden of assignments and course load she has to tackle alone from home. “I had around 7 to 8 subjects, fieldwork, research data collection, so; it is hectic. I have been constantly holed up in my room. I don’t need a lockdown; I have enough work to keep me locked up, “she said.

Although online classes have become a norm now for many college students, online exams, especially board exams, is still in need of some urgent finetuning. Another thing that has to be still ironed out are those practical classes, or industrial training, which are impossible to do online.

Sagnik Majumder, a chemical engineering student at the University of Petroleum and Energy Studies, in Dehradun explains how he is using simulation software to do lab work. ” If we had done the lab work in a real lab, it would obviously have been more convenient for us because we could have seen the results, we would have known the mistakes we are making and would have learned better. Of course, it would have been more enjoyable too, but right now, since we do not have that option, we have turned to simulation software.”

“It is my fourth year, and our class didn’t attend the university for the entire period, and it is challenging for many to study from home for an entire year, even when they have all the resources. But, given the current market situation, especially the oil and gas sector, what I am more worried about is the difficult road ahead,” he added.

Last year, in March, a notice came from the UGC that colleges have to be shut down due to the COVID-19 pandemic, and within hours Kartik Kamalsaikia’s college life came to an abrupt end. At the time, most senior year students at TISS (Mumbai) were in the last phase of completing dissertations, and a few of them were, in fact, still collecting data when they were asked to leave.

“I will never forget the night we vacated our hostel. It felt like waiting at a railway junction or a bus stop. Cabs came one after the other the whole night, and we kept saying hurried goodbyes to friends whom we may not see for a very long time,” he added.

Kamalsaikia, like every student who finished their education last year, did not get a ‘real’ convocation. ‘I never got a sense of closure. I still don’t feel like the formal ending of student life ever happened. At the time when we left, we had no idea of the magnitude of the pandemic, so we returned home with the hope that we will get back to campus soon, even if it is for one last time. But, obviously, this pandemic had other plans for us,” Kamalsaikia lamented.

Indian students (between age 4 to 25) constitute the group that is least vulnerable to COVID-19. But, they have already paid a heavy price for this pandemic, and it has altered their future in many ways. While a handful of IIMs, IITs and top tier colleges have been able to hold on to their placement records, a media report suggests that most Indian colleges, especially government colleges, have had a dismal placement season. Many firms which had previously offered full-time positions to college pass-outs have shifted to recruiting students for unpaid internships during this pandemic. There are hiring freeze in corporate companies, which makes it very difficult for students to get jobs.

Kamalsaikia said that although his college, TISS, did manage to get a good many students placed, the COVID-19 pandemic presented them with several unprecedented situations.

“Generally, the companies and firms which come for placement with five vacancies only came with one or none at all this year,” he said. “If you see the placement records, you will see that the packages offered this year were reduced. Despite bagging a job, many had to wait for months to get their offer letter, which was also a very stressful exercise,” he pointed out.

“However, the most unfortunate part was that there were few who eventually had to drop out of the jobs that they got during the placement because they couldn’t move from one place to another due to travel restrictions,” he explained.

Sahana Kanungo, a final year student of Electronics and Communication Engineering at Techno Main Saltlake, Kolkata, told news18.com that the campus placement process for many has been logistically tricky too.

“Like everything else, this year, the placement process is also virtual. It means students have to appear for their interviews, join the group discussion, and attend mock classes online. So, anyone who doesn’t come from privileged backgrounds or live in places with good internet connectivity is automatically put at a position of disadvantage,” said Kanungo.

“This has been the case ever since the pandemic started. Since I am based out of Kolkata, I do not face any network issues, but there are students who come from remote areas to study at our college. For the past year, they are struggling with connectivity issues. Many of these students access their mobile internet through a hotspot, and obviously, there are data usage limitations per day. For such students, giving an examination on the same day they have classes to attend is challenging,” she pointed out.