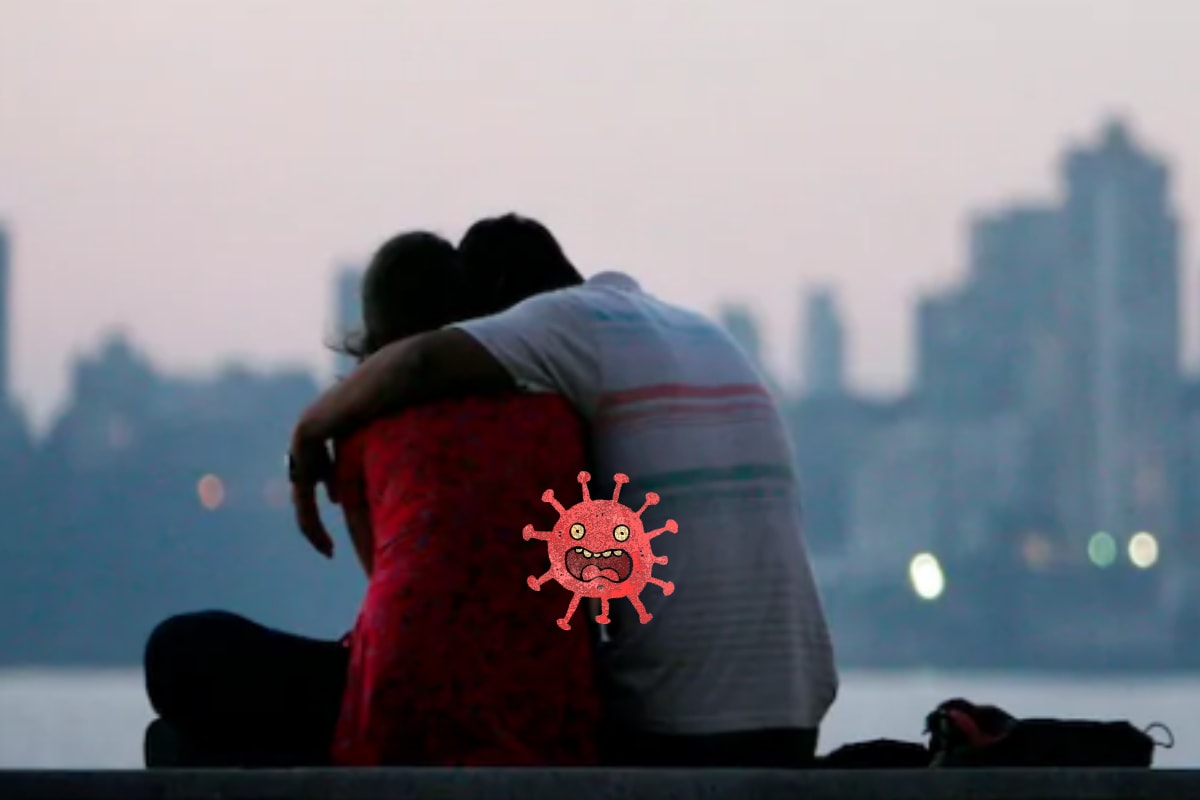 S, a 40-something queer author, had given up on the idea of finding love. Five months into a global pandemic, S and his musician boyfriend are swearing by Rihanna’s song- ‘We found love in a hopeless place’.

“We opened up to each other through messages, audio notes, and video calls. I don’t think this would have happened if we had gone out on regular dates,” S said. Although S and his boyfriend, who live in the same city, haven’t met yet because they live with their elderly parents, they are now desperately waiting for their first date.

While they bonded over exchanging poems and songs, a student from IIT-Chennai found love while he was volunteering for relief work for stranded migrant workers following the lockdown. “She’s a lawyer who was co-ordinating for relief work,” the IIT student said. After a couple of phone calls, they started exchanging texts. Soon, they were talking for nearly 4-5 hours a day and eventually went out on a social-distant date to a beach. They didn’t even hold hands. “I do miss the physical proximity but I hope the pandemic is over soon and we can go on a real date,” he said.

Five months since the outbreak of the Coronavirus in the country, stories of love have not ended. Many, in fact, believe that staying indoors coupled with the uncertainty has helped them communicate better. Many are finding love during a global pandemic.

In a survey by dating app Bumble, 83% of the respondents claim to be interested in dating right now; in these strange times when the coffee shops and bars are closed, and stepping out without a mask is not just a health hazard but also a crime. The survey revealed that 67% wish they were in a relationship and 62% are keen to find a partner so they don’t have to be alone in case the second wave of lockdown restrictions hit.

The dating rules, however, may have changed.

“I remember asking her out a day before the first wave of the outbreak was announced. We live in different cities. I was slated to fly and meet her that weekend but the plan got cancelled,” said Mayank.

Once the lockdown lifted, Mayank flew down to Mumbai. Their first date was at her house. “Her family insisted I meet at her place as opposed to outside considering the area was a hotspot. It was a strange first date. Never been more nervous,” he said.

Things didn’t end rosy in this relationship. Mayank said it came to an ‘abrupt end’ but he isn’t regretting it. He said that the ambiguity and the panic around Covid-19 restrictions allowed them to be more open about vulnerabilities and discuss mundane daily things such as ordering groceries or dealing with parents– which one would not usually otherwise. The techie from Bangalore said that without other distractions, the conversations were “broader and deeper”.

READ: No Touching, Please: Is Coronavirus Killing Romance for Indians?

A 30-year-old woman in Delhi started talking to a 23-year-old in Pune when he ‘slid’ into her Instagram DM. They are both a part of several cinema clubs online and that’s got them interested in each other. Their lockdown dating has mostly been about exchanging songs and couplets. “He’s Marathi and I’m Sindhi, he sends me Marathi songs (recorded in his voice) explaining what that means, and I’ve been teaching him Urdu (explaining Ghalib and Faiz’s couplets) so there is something we’re learning together,” she said.

Dating and relationship experts believe that the lockdown experience has had a lasting impact on the way Indians are navigating the new world of dating— from exploring virtual dating for the first time to using video dates as an opportunity for a ‘pre-date’. “We’re seeing that people are slowing down and spending more time looking for meaningful connections,” a Bumble spokesperson said.

“I think the lockdown has forced people to talk, from the most trivial things to skin deep conversations. which is why people are either falling in love or out of it,” said Ashwini, who swiped right on her ‘perfect match’ on a dating app a day before the lockdown. In a few days, they were watching movies together and texting simultaneously.

“It was a task co-ordinating the whole thing, but we had cracked it by the third movie,” she said. Since then, Ashwini and her partner have watched 13 movies together, all the while living in different cities, not knowing when they will finally meet. “I can’t wait to sit next to him in real life and watch a movie together holding hands,” she said.

Two TikTok lovers, a 23-year-old boy, and a 21-year-old girl started chatting over Instagram. In February, a month before the lockdown, they met at a bookstore and made a TikTok video. “We weren’t exclusive till June or so, but most of my relationships haven’t lasted as long as this talking stage has and I really feel connected to her on a deeper level even if I’ve only met her twice so far,” Rehan said. They made another TikTok video on their second date but before they could put it out, the app got banned in India. “I don’t think either of us, me or her, have the vocabulary to express what it’s like to be in a long-distance relationship while we’re in the same city,” he said.

While many of these couples are in a ‘long-distance’ relationship while living in the same city, others have taken the plunge and met each other.

The first date for Sneha and Akshay was a virtual one. “We dressed up, cooked the same dishes, had them together,” said Sneha. Two months after they practically started doing everything together–cooking, cleaning, eating and watching movies– all through their phone screens, they met in early May once the lockdown started being lifted.

“We went for a walk near his home. I invited him home a couple of weekends later. Introduced him to my cat and his nails. He started spending weekends over at my place,” she said. They are still planning their first real date– one where they can have a hot pizza at a restaurant and not the kind delivered to home.

The Bumble survey revealed that 70% of users claim a change in their behaviour and attitude towards dating compared to before the outbreak — 81% of these users claim that they are more open to taking the time to know their matches at a deeper level, while 66% of users are open to just chatting with their matches, even if it doesn’t result in a long-term connection. “Further, our data showed that in this current environment users are investing more time in having better quality chats with 80% of users claiming they are open to trying or have tried virtual dating at least once,” the Bumble spokesperson said.

Meanwhile, dating apps are reporting a spike in video calls on their platforms even as the lockdown restrictions are being gradually lifted. In India alone, Bumble saw a 38% increase in video calls from March to May 2020 (during the week ending May 1 vs week ending March 13). The spokesperson said that nearly one in two chats have turned into something more meaningful with a large number of messages exchanged.

“Based on our understanding of these insights, we believe that this behaviour will continue once the lockdown restrictions are lifted,” said the spokesperson. Couples, it seems, even in India where dating apps have still not made a place into many hearts– are now fully embracing it, seeking new ways to connect. Virtual dating has become more of a norm than an exception.

But it’s also not just dating apps that have turned into a ‘matchmaker’ during the pandemic.

Stories are also emerging, from across the world, about people digging into their archives and reaching out to exes, or the ones they ghosted. In March, researchers at the Kinsey Institute surveyed 3,400 people online for their study Sex and Relationships in the Time of COVID-19 and found 25% of people had been contacted by an ex through the pandemic.

It seems seeking comfort, familiarity, attention or sex through unsettling times is also a global phenomenon just like the pandemic.

“There is a familiarity there that is comforting for people in the face of uncertainty,” Kristen Mark, who is part of the research team and affiliate faculty at the Kinsey Institute for Research in Sex, Gender, and Reproduction at Indiana University, told The Globe and Mail.

Kainat and Nishat met a couple of years ago but they started talking more during the anti-CAA protests in Delhi. “It was easier to speak to someone who understood the politics of the protest and my own standing as someone who has a Muslim surname. Then the riots happened. Both of us were disturbed by all that was happening and it just helped that we could talk to each other,” she said. Soon after the lockdown was imposed, the conversations increased as they had ‘more time’. Kainat said there was ‘no wooing’ but soon she got to know his friends through online games and movies. “Even as things are extremely bad in the world, it felt nice to share a laugh with him over silly things,” she said.

Old friends, too, have been reconnecting. For Neha, though, when she met her friend from college in February, she had ‘no feelings’ for him. They had known each other for six years and he was visiting home from Germany on his break. She texted him in March end to ask him about his application status for his Ph.D. By this time, the lockdown was announced. “Suddenly, we just started texting every single day — sharing food pictures and memes,” she said. They started dating in July.

That’s the dating bit. Some Indian couples have found love and even tied the knot during the pandemic. A software techie found love in the strangest of places: Coronavirus ward. He met his now-wife at the same private hospital in Guntur. Both of them were admitted there, their beds next to each other. Once they recovered they told their families and got married in July.

While a vaccine may have to wait, love is definitely conquering the virus.

Cardinal Raymond Burke has COVID-19, is on a ventilator