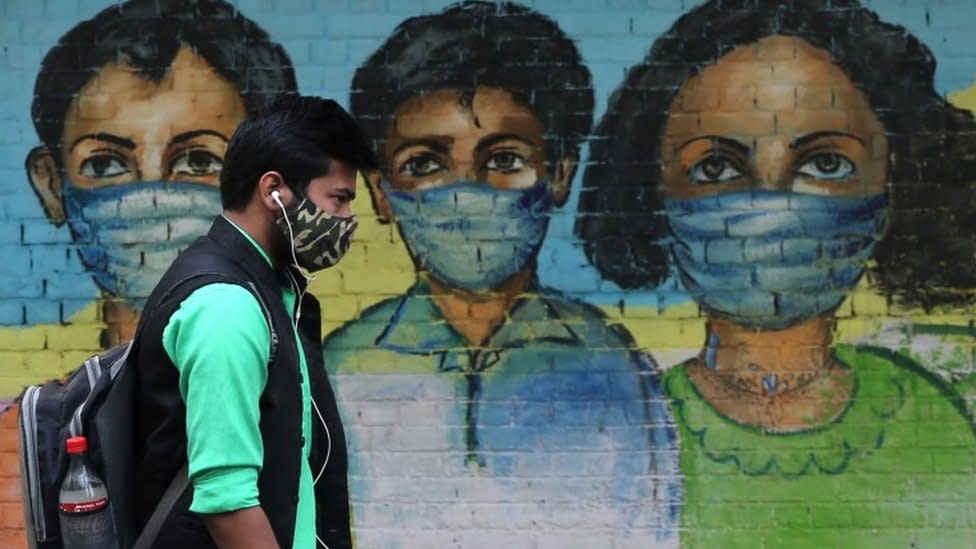 Barely a month later, Dr Hasan sounds wistful. “I really thought we were past it. Now we are facing the intensity of a winter surge of coronavirus,” she told me.

Doctors fear that Delhi may well become the epicentre of India’s first wave of winter infections.

The capital has so far added more than 128,000 cases since the beginning of November. On 12 November it recorded 8,593 cases, the highest in a day since the outbreak began. Delhi is now recording more cases a day than any state. Its total case count has exceeded 500,000.

On Wednesday, Delhi reported 131 deaths from Covid-19, the highest single-day toll. More than 8,300 people have died from the infection so far. The testing positivity rate is a worrying 12% and more than three times the national average.

Not surprisingly, hospitals are flooded with patients and intensive care beds are filling up fast.

“People are struggling for beds. Even I cannot get a bed for my friends or family, it is so bad,” Dr Harjit Singh Bhatti, a consultant at Delhi’s private Manipal Hospital told me. All the 75 Covid-19 beds and 10 critical care beds in his hospital are full. My colleague, Vikas Pandey, who went to admit a relative at a prominent private hospital, found there was a “waitlist” of 250 patients for Covid-19 beds. “It’s worse than in the summer. It’s insane,” he said.

The surge has been sparked by the opening up of offices, factories and markets, and increased social mingling during a busy festival season. It has also been exacerbated by falling temperatures and rising air pollution.

Many of them are being delivered oxygen and administered anti-virals, steroids, plasma, blood thinners and steroids to halt the infection before it turns severe. Doctors say there are possibly fewer fatalities overall than in the summer, but worry that many of the patients who have recovered from the disease would be soon grappling with ‘long Covid’, affecting everything from breathing, the brain, the heart and cardiovascular system to the kidneys, the gut, the liver and the skin.

Doctors say the surge is, at once, similar and different than the outbreak in summer.

“Patients are arriving in clusters this time. We are seeing families and friends getting infected and hospitalised with the virus after attending festivals and frequent and repeated indoor gatherings,” Dr Hasan said. “I have had a married couple or a mother and her son being admitted to critical care with the infection at the same time.”

Doctors are also reporting an uptick in the number of younger patients this time.

Some 70% of the severely ill patients are above 55 but Dr Hasan says “a lot of patients” are between 25 and 45 years. “Nearly a third of my patients are in that age group. They are also reporting high viral loads, hinting at repeated exposures to infected people,” he adds.

“The young feel they are invincible and they are going out and mingling. I believe many of these young adults are the archetypal super-spreaders”.

During the outbreak in summer, doctors were less prepared to deal with the disease. Many seriously ill patients died within days in critical care. With medical advances and clearly-defined treatment protocols such patients have a far better chance of recovering now. But they are also taking more time in critical care, leading to fewer vacancies in the ICU.

Frontline health workers are exhausted. Doctors working in many state-run hospitals are working 15-day-shifts, and quarantining for a week at a hotel or facility before returning to work after clearing a Covid-19 test. Many haven’t gone home in weeks.

They are also handling a deluge of phone calls and consultations from panicky people. “I get more than 50 calls a day now from people asking me where to get beds, what to do, and enquiring about symptoms. And the calls are coming from all over the city,” says Dr Bhatti.

While thousands of patients are staying at home and getting treated through video consultations, many are also rushing to hospitals because they do not know how to manage at home. “I see patients who say they can’t read a pulse oximeter [which measures oxygen saturation and pulse rate]. More people have private health insurance now. They are coming to hospitals with mild and moderate symptoms,” says Dr Bhatti.

Very few Delhiites want or can afford to return to the grinding summer lockdown where people stayed at home and businesses and schools were closed, vacations postponed and livelihoods lost. The surge was somewhat quelled in late September for a fortnight or so, and many thought the virus had gone away. “The pandemic never really went away. It was always there in hospitals,” a critical care intensivist, who preferred to remain unnamed, told me.

The Delhi government has upped the penalty for not wearing a mask to 2,000 rupees ($26; £20). There’s talk about adding critical care beds in hospitals and care facilities. Private hospitals have been asked to preserve 80% of their beds for Covid-19 patients, a move which may again stall elective surgeries and prevent patients with other ailments from getting beds. The government is mulling closing markets and limiting the number of guests allowed at weddings. Doctors and paramedics are being flown into Delhi from other parts of the country to beef up capacity.

“We are still riding the peaks in the middle of the first wave. Apart from the brief respite the infection never really abated. People thought it did, and now we are back to square one,” says Dr Hasan.

Banner image reading ‘more about coronavirus’What do I need to know about the coronavirus?Banner

Don't Miss it Coronavirus: El Salvador Gangs 'making the most of pandemic' – BBC Information
Up Next Frequent, Speedy Testing May Drive Covid-19 Virus Towards Elimination Inside Weeks, Claims Research