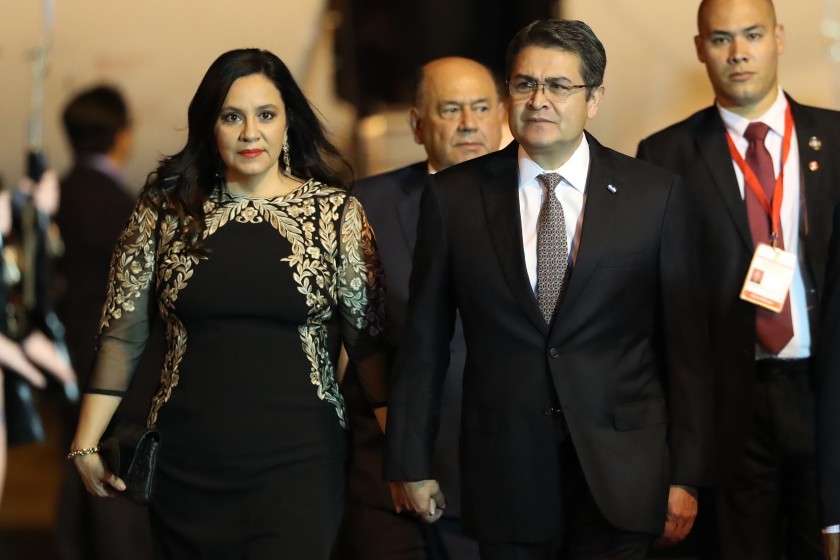 When health officials in Honduras announced this week that President Juan Orlando Hernández had been hospitalized after testing positive for the coronavirus, there were the expected outpourings of support.

But skepticism — voiced by the president’s political opponents as well as ordinary Hondurans — quickly followed, with some questioning whether Hernández was sick at all.

Memes circulated online, including a widely shared cartoon showing Hernández in a hospital bed being coached on how to look ill.

Erick Benjamins, a 26-year-old barber in the northern department of Santa Barbara, said he thinks the president is lying to divert attention from his controversial handling of the coronavirus as well as a sweeping U.S. drug trafficking investigation that has implicated Hernández and several members of his family.

In an interview, former President Porfirio “Pepe” Lobo Sosa voiced a widely held theory that Hernández may be “planning a simulated death” to avoid facing charges.

There is no evidence that Hernández is inventing his illness — or scheming to fake his own demise. But the fact that such theories have gained so much traction underscores just how deeply divided this small Central American nation has become — and just how much legitimacy Hernández has lost.

Hernández, 51, has been mired in controversy since he first took office as president in 2014, when he admitted that his campaign had been funded in part by money stolen from the country’s Social Security Institute.

A man burns a photo of President Juan Orlando Hernández during a protest in Tegucigalpa, Honduras. (Rodrigo Abd / Associated Press)

In subsequent years, he faced widespread protest movements calling for his ouster, including one after he pushed through a constitutional change that allowed him to run for a second term, and another when he claimed victory in a 2017 election that was marred by irregularities.

Through it all, Hernández enjoyed steadfast support from Presidents Obama and Trump, who liked his cooperation on efforts to curtail migration to the United States.

But Hernández now faces his biggest challenge yet: accusations from U.S. prosecutors that he conspired with drug traffickers and used their money to fund his political career.

Hernández was identified as a co-conspirator in a drug trafficking case against his younger brother, Juan Antonio “Tony” Hernández, who was convicted in October.

Since then, prosecutors have indicted several other alleged members of a drug ring that they say was run by the Hernández brothers and their sister Hilda, who reportedly died in a 2017 helicopter crash. Many in Honduras question whether she actually died because the bodies at the crash site were not identifiable and several people said they never saw her board the aircraft.

Hernández has denied involvement in drug trafficking, arguing that his government has taken a tough stance against organized crime. Yet it appears increasingly likely that he may face charges, possibly after he leaves office after the next election in 2021.

The president has also come under scrutiny for his hard-line response to the coronavirus.

A few days after Honduras confirmed its first cases on March 10, Hernandez ordered a near-complete lockdown of the country, closing its borders and issuing a curfew that required people to stay in their homes for all but a few hours each a week.

The swift actions appear to have spared Honduras from a mass outbreak — the nation has confirmed just 336 deaths, according to the Pan American Health Organization. But human rights advocates say officials in Honduras have used curfew as an excuse to violate human rights.

More than 33,266 people have been arrested for breaking curfew, including journalists and human rights activists.

“There’s no question that the government is using this as a very complete military takeover of the streets,” said Dana Frank, a history professor and Honduras expert at UC Santa Cruz. Rumors that Hernández is not sick have flourished because of the president’s history of dishonesty, she added.

Marvin Ponce, an advisor to the president, said in an interview Thursday that accusations that Hernández is lying are ridiculous.

“He has COVID-19,” Ponce said. “It’s a polarized country, and [the opposition] is taking advantage of that to push these rumors.”

Ponce said Hernández was admitted on Wednesday to the military hospital in Tegucigalpa, the nation’s capital, after he tested positive for COVID-19 and after X-rays revealed he had pneumonia.

Hernández had announced his positive diagnosis the day before in a televised national address. He said he had mild symptoms and hoped to recuperate quickly.

“I trust in God, Honduran doctors and medicine,” Hernández said.

He said his wife and two of his aides were also infected, but were not displaying symptoms.

Tirza Flores Lanza, an appeals court judge who has clashed with Hernández in the past, said she doesn’t know whether the president has the coronavirus, and doesn’t really care. But she was worried about what the rampant conspiracies said about the state of things in Honduras.

“People here are utterly distrustful,” she said. “We don’t believe absolutely anything, especially not what comes from the government.”

Linthicum is a Times staff writer and Cerrato a special correspondent.

With vaccines stalled, some see coronavirus speedy checks as a substitute method to return to regular