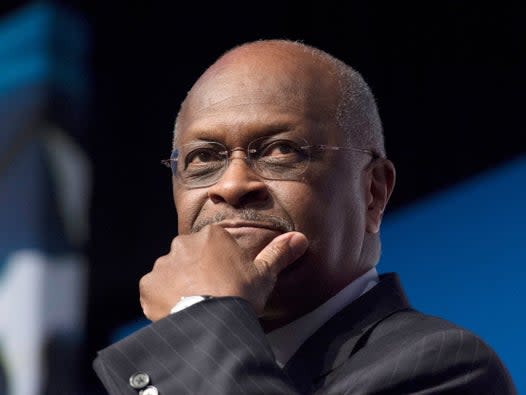 Herman Cain to be nominated for Fed seat by Donald Trump: AP

Herman Cain, a business executive and former Republican presidential candidate, has died after contracting the novel coronavirus. He was 74 years old.

The prominent conservative businessman was hospitalised weeks after he attended President Donald Trump’s rally in Tulsa, Oklahoma, on 20 June, where he served as a surrogate for the Black Voices for Trump committee.

Cain had been critically ill with Covid-19 for several weeks, after being admitted to hospital in early July and receiving oxygen.

At least eight advance team staffers for the president’s re-election campaign who were in attendance at the rally tested positive for Covid-19.

A former presidential nominee, Cain gained prominent during the 2012 Republican primaries for a 9-9-9 tax plan that would have reduced virtually all income, corporate and national sales taxes to a standard rate of nine per cent.

You’re never ready for the kind of news we are grappling with this morning. But we have no choice but to seek and find God’s strength and comfort to deal… #HermanCain https://t.co/BtOgoLVqKz

He dropped out of the race after he was accused of sexual harassment by four women, allegations he denied while suspending his campaign.

Cain was a successful business executive and the former CEO of Godfather’s Pizza. He authored several books about entrepreneurship and was a syndicated columnist for Newsmax.

The site confirmed his death and said he was “set to launch a weekly show” before passing away in an Atlanta-area hospital “where he had been critically ill for several weeks”.

Cain’s website also confirmed his death in a blog post titled: “We’re heartbroken, and the world is poorer: Herman Cain has gone to be with the Lord.”

“Herman Cain – our boss, our friend, like a father to so many of us – has passed away,” the post read. “We knew when he was first hospitalized with COVID-19 that this was going to be a rough fight. He had trouble breathing and was taken to the hospital by ambulance. We all prayed that the initial meds they gave him would get his breathing back to normal, but it became clear pretty quickly that he was in for a battle.”

“There were hopeful indicators, including a mere five days ago when doctors told us they thought he would eventually recover, although it wouldn’t be quick,” the post continued. “Herman was 74. Although he was basically pretty healthy in recent years, he was still in a high-risk group because of his history with cancer. We all prayed so hard every day. We knew the time would come when the Lord would call him home, but we really liked having him here with us, and we held out hope he’d have a full recovery.”