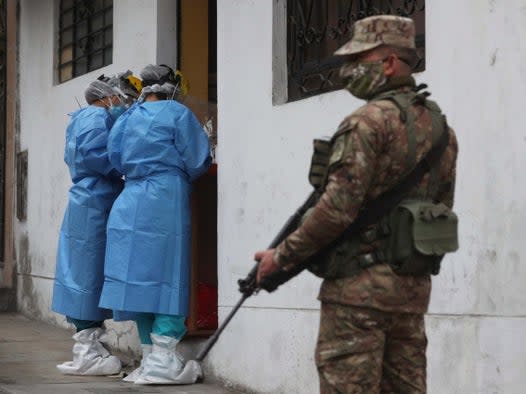 More than 900 women and girls have gone missing and are feared to be dead in Peru since the country’s coronavirus lockdown started, authorities have warned.

Eliana Revollar, head of the women’s rights department of the national ombudsman’s office, said girls made up 7 per cent of the total figure.

Ms Revollar said 915 women in Peru were reported missing between 16 March and 30 June – adding they were feared to no longer be alive.

Peru is one of the countries in Latin America which has been most badly affected by coronavirus, with more than 384,000 cases and 18,229 deaths.

The country implemented one of the longest and most stringent lockdowns in the world to curb the spread of Covid-19 – lasting from 16 March until the end of June.

Jacqui Hunt of Equality Now, a non-governmental organisation which aims to promote the rights of women and girls, told The Independent the number of women and girls going missing in Peru is both “staggering and horrific”.

She added: “Peru has one of the highest rates of violence against women in Latin America, and the coronavirus pandemic has worsened what was already a dire situation. Covid-19 response measures introduced by the Peruvian government must address the particular vulnerabilities of women and girls. Strict enforcement of laws against domestic violence and other forms of gender-based violence should be imposed and the justice system should be applying a gender-based lens when investigating and prosecuting cases.

“The systemic problem of victim-blaming requires urgent attention as it fosters a culture of impunity for perpetrators. The Peruvian authorities also need to take greater action to remove the deep-rooted inequalities and prejudices that allow violence against women and girls to be normalised. The pandemic must not be an excuse to further neglect the issue. Rather, extra efforts must be taken to demonstrate that even in times of crisis, gender-based violence will not be tolerated.

“Femicide is not unique to Peru, women and girls are subjected to violence in countries throughout the world, across all cultures and social settings. The Covid-19 pandemic has shone a global spotlight on how male violence against women will continue to flourish unless and until the authorities take it seriously and hold perpetrators to account. Now the world is aware of the extent and horror of domestic violence, it has to act concertedly to prevent, address and end impunity for this harm.”

The UN estimates one in three women in Peru is likely to suffer physical or sexual violence from a partner during their life.

Awareness has been raised about gender-based violence in the country in recent years – with thousands descending on the streets of the capital Lima to show their opposition in 2018.

According to the UN, Latin America has the world’s highest rates of femicide, defined as the gender-motivated killing of women. Almost 20 million women and girls a year are estimated to endure sexual and physical violence in the region.

Domestic violence has soared in Latin America since the coronavirus pandemic forced governments to introduce lockdowns.

‘We’ve been abandoned’: Brits denied repatriation from Peru to London