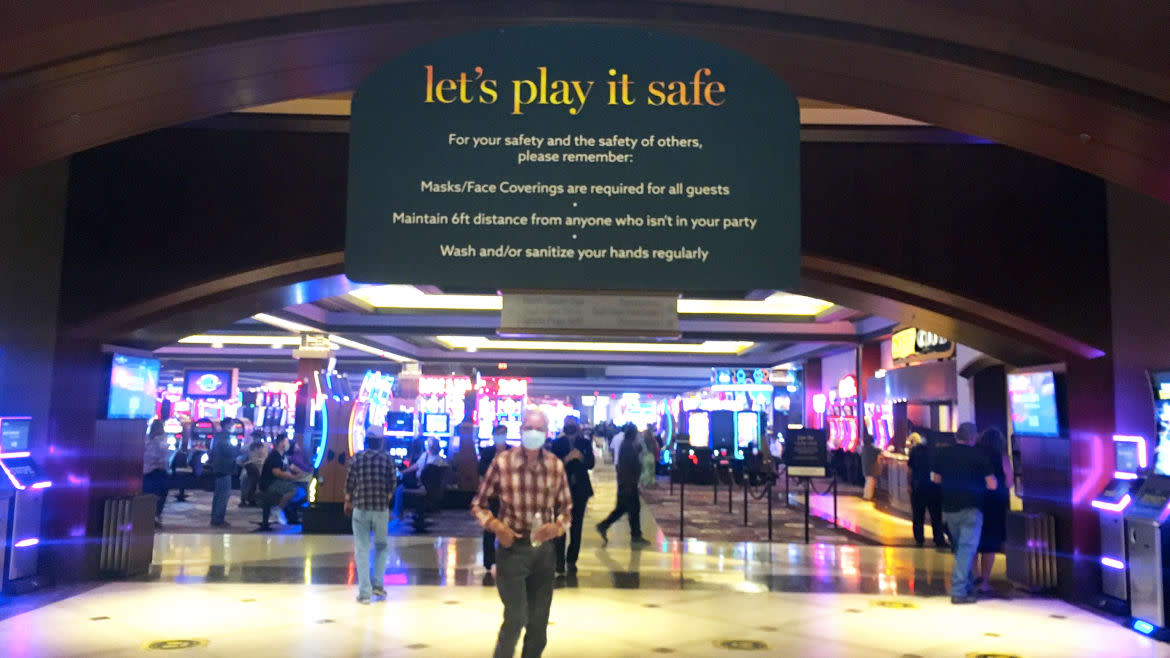 But up in rural Capay Valley, as the historic blaze crept within two miles of Cache Creek Casino Resort and the sun blazed orange behind blooms of smoke, hundreds of gamblers shirked both fire and the coronavirus pandemic to enjoy a night working the slots and trying their luck at the tables.

“These fires are going to continue to go up every year,” said Jose Perez, 44, drinking a beer at the casino bar with his mask covering around his neck. “They had the same fires last year.”

Yolo County—yes, that is the name of the jurisdiction in question—years ago divided Capay Valley into two distinct evacuation zones, separated down the center by Highway 16, which runs north and south through the valley and is the only road one can take out.

County officials this week ordered residents and businesses in the western zone of the highway to evacuate, but allowed the other side, where the casino lies, to remain.

“They ain’t gonna do that,” said Keith Ingraham of the prospect of the county closing the resort.

A firefighter prepares to fight back a portion of the LNU Lightning Complex fire as it progressed down the western slope of California’s Capay Valley about two miles south of the Cache Creek Casino Resort on Friday, August 21.

Ingraham, 60, known as “Caveman” by his friends in the gambling world, is a casino regular who says he makes a living off the slot machines. Undeterred by the coronavirus pandemic, the charismatic ponytailed man returned to the casino the day it reopened in early June. He visits about three times a week.

“I’m not worried,” he said of COVID-19. “I’ve rolled around in the dirt, been in some of the worst environments.”

“I hardly ever get sick,” he added. “All them Long Island Iced Teas.”

When Governor Gavin Newsom began reopening California’s economy over the summer, the virus exploded throughout the Golden State. Public health authorities have recorded over 650,000 confirmed cases and nearly 12,000 deaths. Most contractions of the illness have been attributed to indoor interactions involving large groups of people, such as house parties or church services.

At the casino, employees monitor guests’ temperatures each time they enter the building, and mandate that everyone wear masks. Hand sanitizer stations pepper the gambling hall floor, and signs reinforce the spirit of sanitization: “Clean hands are winning hands.”

Patrons Friday afternoon were mostly older, though young gamblers trickled in as the weekend hours approached. Guests did abide by the face covering rule, with some exceptions.

After all, you can’t enjoy a cigarette or drink through a mask.

“Everybody has to worry about it,” said Dino Rio of the virus, but “you can’t really stay home.”

Rio, 57, and his wife Janet, 54, come to Cache Creek to relax after work days that can go as long as 14 hours for him—servicing fire extinguishers—and 11 hours for her, at a Walmart. They say they also take the fires seriously, and have family in Santa Cruz who had to flee their homes last week—along with their horses, pigs, chickens, and parrots—from one of the state’s hundreds of wildfires caused by lightning.

“Last year, we were here when that whole hill was on fire,” said Rio, pointing to a smoldering western range a half mile from the resort. “I’m not worried about hitting the fires.”

People watch the Walbridge fire, part of the larger LNU Lightning Complex fire, from a vineyard in Healdsburg, California on August 20, 2020.

Seven miles north of Cache Creek in Guinda, firefighters Thursday fought back a blaze that nearly reached the small town. Drivers stopped their trucks along Highway 16 to watch as flames fast devoured golden, dry grass down the hills toward the valley farmland, the air hot and thick with smoke. On Friday, the wildfire crept to the south and north of Cache Creek down the western range toward the highway, nearing the valley’s only road exits.

But Yolo County authorities, who did not immediately respond to a request for comment, stuck to their choice to keep the resort’s side of the highway open. They seemed to trust visitors to make the right decisions on their own, just as they had for months with the virus.

Mokbel Almaylaa, a writer visiting the casino, said that “of course” he had concerns over the virus, “but I always wear a mask.” As for the wildfires, he said the California blazes posed a grave danger, but temperatures had fallen enough from the record highs seen throughout the state the week before—last Sunday, Death Valley recorded 130 degrees, a possible world record—for him to trust officials’ judgment.

Perez, 44, said older folks may want to be more careful about coronavirus—his 70-year-old father was a regular at the casino until the pandemic started. But he thinks it’s less dangerous for people his age (the reality is COVID-19 can kill anyone) and he wasn’t going to let fire season stop him, either.