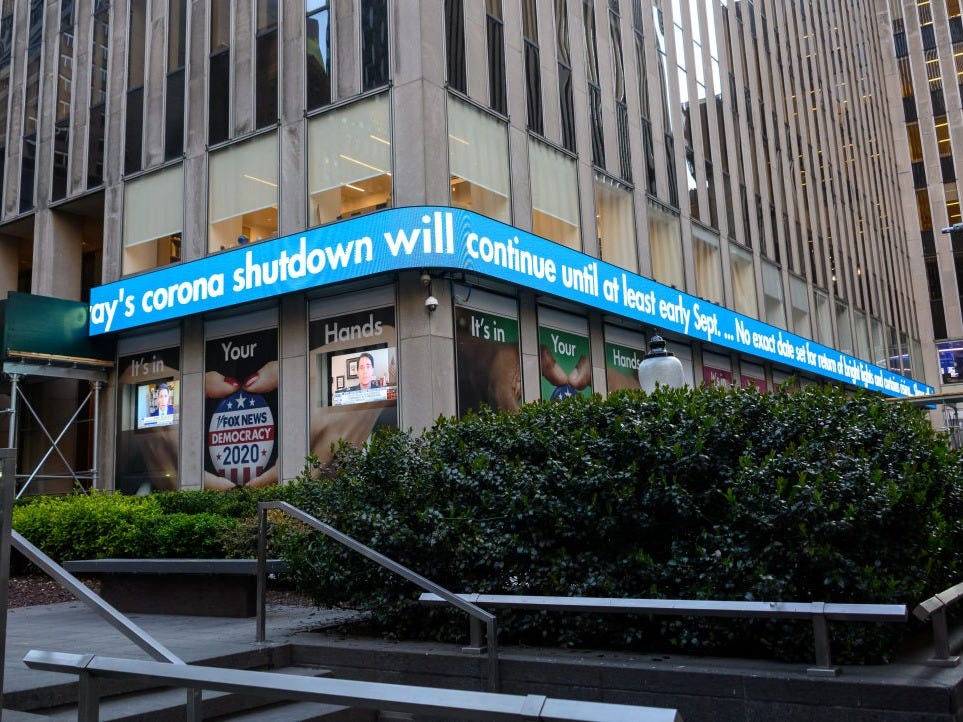 A view outside Fox News studios during the coronavirus pandemic on May 13, 2020 in New York City.

Coronavirus coverage on Fox News has been cut by 20% over the last month, according to data reported by Media Matters for America.

The network has traded coverage of the virus for stories on anti-lockdown protests and echoes of President Donald Trump’s comments that stand in contrast to recommendations from leading experts in recent weeks.

Fox News has been criticized over the past two months for its coronavirus coverage that has included downplaying death totals and pushing back against social distancing guidelines even though its own employees are under a work-from-home order until at least June 15.

Fox News has cut its coronavirus coverage by more than 20% in recent weeks, according to data reported by Media Matters for America.

Fox News initially sparked criticism by downplaying death totals and pushing back against social distancing guidelines in mid-March before on-air talent took a sharp pivot to more serious coverage of the novel coronavirus pandemic as outbreaks took hold of cities across the US through April.

However, on-air figures like host Tucker Carlson repeated calls for President Donald Trump to lift lockdown measures and open businesses across the country, apparently echoing comments by Trump that are in direct opposition to recommendations from leading experts as coronavirus cases steadily rose.

The remaining coverage on the network has focused less on scientific findings behind the pandemic, but instead on pushing stories on the political divide under existing lockdown measures and favorable looks at anti-lockdown protests, though Fox employees are under a work-from-home order through at least June 15.

In the first weeks of May, the network’s shrinking coverage of coronavirus-related stories turned toward new revelations like the Department of Justice’s attempt to drop the case against retired Lt. Gen. Michael Flynn, and its significance in special counsel Robert Mueller’s Russia probe.

As the death toll among Americans passed 84,000 in the second week of May, the network, alongside Trump’s Twitter account, latched on to an “OBAMAGATE” scandal.

After Republican senators released a list of administration officials under former President Barack Obama who worked to unmask an American from intelligence reports who turned out to be Michael Flynn, Trump began tweeting harsh but vague allegations against Obama his former Vice President Joe Biden.

The collective push from Fox News and Trump’s Twitter over the last week appears to be a narrative related to the decision in 2017 to publicly reveal Flynn’s identity and aimed at eroding Obama’s significance ahead of the 2020 presidential election.

The coronavirus could have ‘one huge trick.’ Scientists are studying easy methods to cease it.