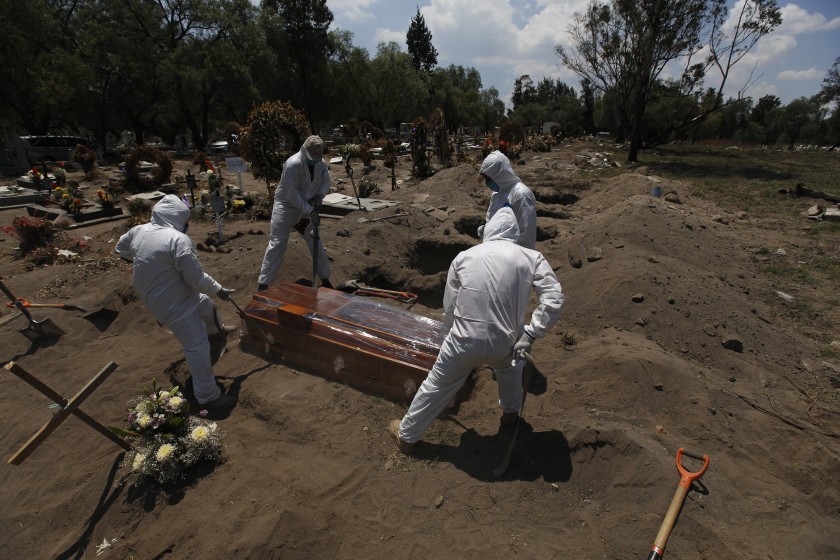 Mexican authorities sought to calm an anxious public after the nation’s coronavirus death toll grew by 1,092 on Wednesday — more than doubling the daily record and for the first time exceeding the single-day total in the United States.

He hastened to clarify that many of the deaths reported Wednesday had occurred days or even weeks ago but was only now being added to the total. U.S. officials reported 988 deaths Wednesday. Mexico’s previous record of 501 deaths came on May 26.

“I want to inform all the people of Mexico that this happened because there was an adjustment in deaths that had occurred previously,” said López Obrador, who was visiting the southern state of Chiapas. “It doesn’t mean that 1,000 people died in a day.”

Still, the one-day total raised new doubts in a country where critics have charged that the government is deflating COVID-19 casualty numbers, employing a flawed strategy against the virus and rushing to restart the economy too early.

The total number of deaths in Mexico now tops 11,700, far below the U.S. total of 108,120, but the seventh-highest total in the world, according to Johns Hopkins University. Mexico ranks second in deaths in Latin America after Brazil, where 32,548 have died.

Former President Felipe Calderón, a political rival of López Obrador, joined in calls on social media for a day of national mourning. “Although they didn’t die on a single day, this is still a tragedy,” Calderón said on Twitter.

The bad news comes days after Mexican authorities declared “a new normal” that allowed a gradual reopening of the critical mining, construction and automotive-manufacturing sectors. Washington has pressed for restarting vital automotive parts supply chains that support U.S. markets, even though some border factories have seen coronavirus outbreaks and deaths.

Unlike some other Latin American nations, however, Mexico rejected implementing a national curfew or mandatory stay-at-home measures, and never closed the country’s borders and airports.

In recent days, many residents have returned to the streets of Mexico City and other areas, often without wearing face coverings or respecting social-distancing parameters. That has raised fears that the contagion could continue to accelerate.

“The epidemic has not finished,” Dr. Hugo López-Gatell, the undersecretary of health who heads the country’s response to the coronavirus, warned this week, pleading with citizens to “resist as much as possible going into public streets.”

As the public face of the government response, López-Gatell has come under increasing criticism for assurances that have proved overly optimistic.

He had predicted that cases would max out in late May or early June. He has revised that to mid-June. He had also predicted a total death toll not exceeding 8,000.

López-Gatell has also acknowledged that official tallies of infections and deaths here represent a significant undercount. How much remains a major question mark.

Several independent studies of death certificates have indicated that fatalities in Mexico City, the epicenter, may number at least three times the official count.

From the outset of the epidemic, as many countries sought to ratchet up testing for the virus, Mexico opted for a low-cost strategy of focusing tests on serious cases.

Mexico’s testing rate — about 2,350 per 1 million residents — is among the lowest in the Americas. Chile and Peru test at a rate of more than 14 times that of Mexico, according to the Worldometer statistics site.

Defending Mexico’s approach, López-Gatell has said targeted testing was sufficient to allow authorities to monitor the spread of the virus. But critics have argued that it leaves the country largely in the dark about the scope of contagion while failing to identify many infected persons who have minimal symptoms but can spread the virus.

López Obrador also defended Mexico’s approach. “I think the strategy has been correct,” he said Thursday. “We were lucky that the pandemic did not hit us first and that gave us time to prepare.”

Mexico’s health and mortuary infrastructures have buckled but not collapsed under the strain of the pandemic.

Authorities have bolstered hospital space and recruited and trained new medical workers. Hospitals treating COVID-19 patients in Mexico City have been hovering at close to 80% of capacity.

The virus has killed at least 271 Mexican medical personnel, more than have been reported in Italy or Spain but still fewer than in the United States.

Cecilia Sánchez in The Times’ Mexico City bureau contributed to this report.

CDC to shorten quarantine for these uncovered to Covid-19

Merck and Novartis join the hunt for a COVID-19 vaccine