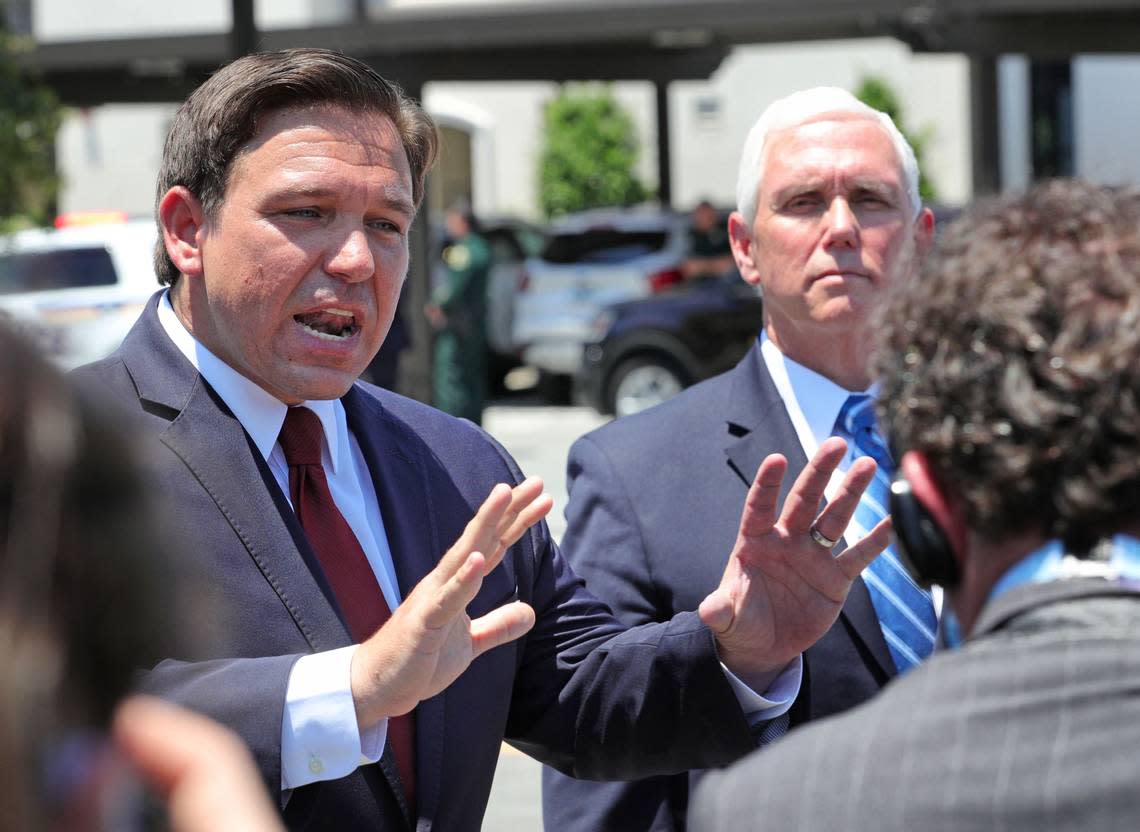 When Vice President Mike Pence, the head of the White House coronavirus task force, returns to Florida Thursday, he’ll find a much different situation than when he last visited in late May.

Florida at the time was reopening restaurants and gyms. Politicians were paving the way for the Republican National Convention to relocate from Charlotte. And the state — a must-win this November for President Donald Trump — was hailed by Fox News anchors as a conservative success story.

“We succeeded,” a defiant Gov. Ron DeSantis said on May 20, chiding his critics in Orlando next to a nodding Pence.

But as Pence prepares to return to Florida to reassess the situation — his campaign stop in Sarasota was called off but he’s still planning a visit to meet with DeSantis, his office said Monday — the state’s coronavirus outbreak is escalating to new levels, complicating Trump’s reelection campaign and clouding the outlook for the convention.

Unlike in early June, when coronavirus cases were steady and the Republican National Committee announced that Trump would accept the party’s presidential nomination before a presumably packed arena in Jacksonville, Florida is now setting new records for positive coronavirus cases almost daily.

The Florida Department of Health reported 5,266 new cases Monday — more than triple the number of cases announced on June 11, the day RNC Chairwoman Ronna McDaniel announced that the organization would fete Trump in Jacksonville. The state set a new high Saturday of 9,585 cases.

RNC spokesman Rick Gorka told McClatchy on Monday that it is “business as usual” when it comes to the Trump campaign’s ground game in Florida, and the national committee continues to coordinate with local leaders in Jacksonville on its approach to the convention.

“The RNC is committed to holding a safe convention that fully complies with local health regulations in place at the time. The event is still two months away, and we are planning to offer health precautions including but not limited to temperature checks, available PPE, aggressive sanitizing protocols, and available COVID-19 testing.”

But parts of Florida are doing what DeSantis said he wouldn’t do: reversing course on reopening. The state shut down bars last week. In South Florida — now host to a planned presidential debate in October — beaches will be closed for the July Fourth holiday weekend. Businesses and individuals have been threatened in some areas with closure, fines and arrest if they fail to follow local restrictions.

And on Monday, the city of Jacksonville announced a new order to wear masks indoors at public events where social distancing couldn’t be achieved.

Trump’s polling numbers, meanwhile, are slipping further behind former Vice President Joe Biden in Florida, where a Fox News poll of registered voters in the state recently found the president down by 9 points, and only about one-third of voters, or 36 percent, said they would trust Trump more than Biden to effectively respond to the pandemic.

Any return to his home state has seemingly been frustrated by the coronavirus as well.

Trump recently promised to reporters that he would hold a rally in Florida, but details of that event have not emerged. And the campaign “postponed out of an abundance of caution” Pence’s Thursday stop in Sarasota, which was supposed to be part of his “Faith in America” tour, though he’ll still meet with the governor and the governor’s health team, Pence’s office said.

“It’s always great to have the president and the vice president and surrogates doing earned media events, and there’s no more of a powerful messenger than when the president of the United States lands in a state,” Gorka said. “At the same time, the blocking and tackling, the fundamentals of the campaign, have been operating at 100 percent every single day.”

A Trump campaign spokeswoman said that in Florida, 18,000 grassroots supporters had been contacted and the campaign had held more than 1,100 online events. Close to 9 million calls have been put into Florida voters, too, said Samantha Zager, noting that the Trump campaign has had staffers in the state since 2015.

Trump’s ability to accept the Republican Party’s nomination before a packed arena in late August also appears to be in question as dozens of doctors and health professionals call on the city of Jacksonville to either postpone the convention or dramatically slim down plans to draw thousands to the city for Trump’s reelection kickoff.

“Governor Ron DeSantis and Mayor Lenny Curry have consistently prioritized the health of all Floridians throughout this global pandemic. As we plan for an event that is two months away, we continue to follow their lead and will always put the health of our guests and our city first,” said Erin Isaac, Jacksonville 2020 Host Committee communications director.

Trump has notably avoided wearing a mask in public. His press secretary, Kayleigh McEnany, said Monday that Trump had no objections to Jacksonville’s mask mandate, but did not say the president would wear a mask during the convention if local rules require it.

“He has no problem with masks and to do whatever your local jurisdiction expects of you,” McEnany said.

The city’s policy does not include a timeline, so it’s unclear if the order will still be in place in late August. But Mary Jo Trepka, an Florida International University professor of epidemiology, said a political convention remains a risky event, even if masks are worn.

“Masks are fantastic and an important first step but I don’t think that’s going to be enough,” she said. “They really need to figure out how to reduce the density of people or reduce the duration of time people are together.”

Trepka said “it’s hard to predict” what Florida’s outbreak will look like in August, or in the fall, when an Oct. 15 presidential town hall-style debate is scheduled for Miami, the city with the most confirmed coronavirus cases in the state. But she said, given the current number of infections being confirmed daily, it’s unlikely either event will be held without the specter of spreading the virus.

“I would really like to be wrong but I suspect there will still be COVID-19 in the community in October,” Trepka said.

DeSantis on Monday said his administration is working closely with the city of Jacksonville, and reiterated that he’s left decisions on local mandates up to mayors. During a Sunday press conference, DeSantis said he expects the state to have contained its escalating outbreak by late August.

“We always said, ‘Look, we are still a work in progress. We’re gonna try to get to yes,’” he said. “We’re in a dynamic situation so, they know that. But I think we’ll be fine by that time. It’s a couple months away, and we look forward to seeing that.”

COVID-19, overdoses driven US to absolute best dying overall ever