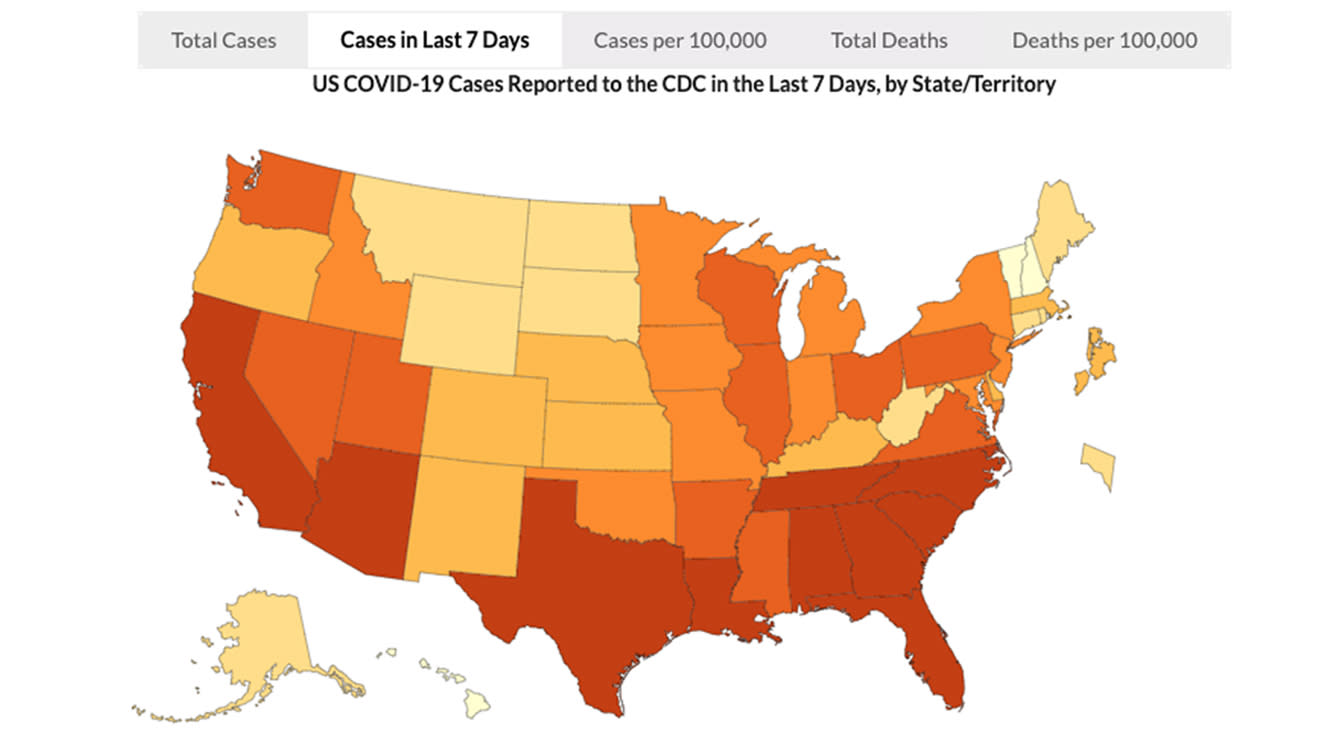 Just two days after a Florida sheriff announced the state had abruptly cut him off from data about local cases of coronavirus infections, state health authorities have reversed course, agreeing on Thursday morning to continue providing the information.

The reversal came in the wake of social media outrage and attention from media outlets.

For four months, Mike Chitwood, the sheriff of Volusia County, a stretch of central Florida coastline that includes Daytona Beach and other popular destinations, has tried to compensate for the state’s shortfalls in data reporting by using his social media accounts to inform people where new infections were being reported. But that ended earlier this week, when Florida’s health officials informed Chitwood’s office that they would no longer provide him or any other county-level officials with the data that made such reporting possible.

“Sorry to inform you tonight that our covid-19 data updates for Volusia County are over,” Chitwood wrote on Twitter on Tuesday evening, explaining that the state’s Department of Health would no longer be providing him with address-specific information that he was then using to determine how the virus was spreading across the county.

On Thursday morning, as Florida reported a record-breaking 120 new coronavirus deaths overnight, Chitwood told Yahoo News that the state had agreed to resume providing the data.

“I vehemently disagree with hiding the numbers,” Chitwood said in a phone interview. He says he remains a supporter of Gov. Ron DeSantis, a Republican, but believes that political retribution did play a part in the sudden decision to stop providing him with data. The state offered no explanation of why it decided to provide the data after all.

“As this pandemic is growing, why are we giving less information?” Chitwood wondered. “That’s not healthy.” He told Yahoo News that he was unaware of any other Florida sheriff who was providing similar coronavirus updates.

The development comes as Florida confronts not only a burgeoning caseload but also persistent questions about how forthcoming state leaders have been with the public. Officials from the same state health department who appeared to be cutting off Chitwood have also been accused of telling Rebekah Jones, formerly a data scientist for the state, to alter statistics in some counties; of telling coroners not to report coronavirus deaths; and, most recently, of hiding information about hospitalizations.

County health department spokeswoman Holly Smith, whose office was also providing Chitwood with new infection data, told Yahoo News on Wednesday that a “statewide directive” against any further sharing had been put in place.

State officials told Yahoo News they would provide an explanation, but did not.

Chitwood’s message of distress on Tuesday evening was shared by Jones, the geographer who created Florida’s coronavirus dashboard and who was fired because, according to her allegations, she refused to change data in order to further the narrative of DeSantis, an ally of President Trump, that Florida was defeating the disease.

That narrative is now in tatters, but the severity of the crisis appears to have made the DeSantis administration even less forthcoming than it had previously been.

“When there’s trouble getting the information, it’s because the information is troubling,” Chitwood told a local outlet on Wednesday, recalling a lesson he’d learned when he began as a Philadelphia police officer at the devastating height of crack cocaine’s grip on American cities during the late 1980s.

Chitwood told Yahoo News he still supports DeSantis: “I endorsed him, I voted him,” he said of the ambitious 41-year-old who some believe will run for president in 2024. Chitwood said his decision to publish coronavirus data had nothing to do with scoring political points and was rooted only in his desire to keep his deputies safe.

Back in mid-March, Chitwood decided to rectify what he saw as shortfalls in the information being provided to Floridians by their elected officials, specifically DeSantis, who has consistently received among the lowest approval ratings of any governor in the nation for his coronavirus response.

“Since I’m the chief law enforcement official in Volusia County, I think it’s my responsibility to provide more transparency than has been provided so far,” Chitwood vented on his Facebook page on March 13. Twice a day, he explained, the state health department was sending him data about suspected coronavirus cases around the country, with the specific address for each case.

While he had no intention of making public the addresses of potentially sickened Floridians, Chitwood did want Volusia County residents to know if they were living in a potential mini hot spot. His post provided the first of what would be dozens of informal but data-informed public health reports, detailing where cases were suspected — four in Daytona County, three in Port Orange and so on —while also explaining that a suspected case was not necessarily a positive one.

Chitwood told Yahoo News that he was so concerned about privacy that he would not even release address-specific data to other authorities in the county. “We never, ever, ever, ever published an address or a name,” he said with vehemence. Chitwood explained that for small communities across the county, his updates provided a consistent, easy-to-follow overview of the pandemic’s progress.

“I know this isn’t a lot of information, but it’s more than has been made available to this point,” he wrote in his inaugural post back in March. The next morning, he explained to a local outlet that if “you don’t put info out there you are creating a panic.” Chitwood added that “they were adamant against anybody knowing what they were doing,” a reference to health officials in the state Capitol in Tallahassee.

For four months, Chitwood provided Volusia County with daily updates. Each day, Laura Jewell, a data specialist in the sheriff’s office, would receive a spreadsheet from the state with the addresses of suspected infections. She would also receive a call from county officials with a similar update, allowing her to check the two data sets against each other.

Jewell explained to Yahoo News that the address-specific information was especially helpful to first responders, including police officers, firefighters and emergency medical personnel. Shortages of personal protective equipment, she went on to say, meant it was critical for those first responders to be aware that they were entering a household where someone might be infected with a highly contagious disease.

At the same time, that information could be pooled to give the public a sense of where across this county of 550,000 people infections were rising or falling. “The public was very grateful,” Jewell told Yahoo News. “I personally didn’t get any kind of pushback.”

Chitwood would share the updates on his personal social media accounts. The updates included both confirmed individual cases and monitored households for cities and towns across the county. Chitwood would also add a narrative, offering insights into what was happening in nursing homes or how many tests had been administered.

While those posts were not masterworks of Silicon Valley data visualization, they provided a clear, unvarnished sense of what was happening in Volusia County. Yet Chitwood’s frustration with the lack of transparency was never far below the surface. Even as he disseminated the statistics provided by the state, he wondered if they were accurate.

“Do I believe these numbers are completely accurate? No,” he wrote on April 24. “We can’t put our faith in incomplete numbers. But some information is better than no information, so I’m giving you what I have.”

But then the flow of information from Tallahassee abruptly ended on Tuesday, just as Florida appears to be on the cusp of letting the coronavirus run rampant through the state.

I want to add something to what I said last night about covid-19.

W/ so many failures to effectively confront this crisis at every level of government, I really do believe individual Americans & the private sector are left to pick up the slack to get us through this pandemic…

“I was just informed that effective immediately the DOH will no longer be providing addresses to flag,” Jewell wrote to Chitwood and others in the sheriff’s office. “They advised that due to the amount of time it is consuming and the fact that there is such a large community spread that first responders should be utilizing PPE anytime they are in contact with the public.”

A clearly outraged Chitwood then took to social media, denouncing failed leadership and lamenting “so many failures to effectively confront this crisis at every level of government.”

The outrage clearly got the attention of Tallahassee. Chitwood told Yahoo News on Thursday that the state would resume sending him data. “I think this is a win for all first responders,” he wrote on Twitter, “and for every resident of Volusia County.”