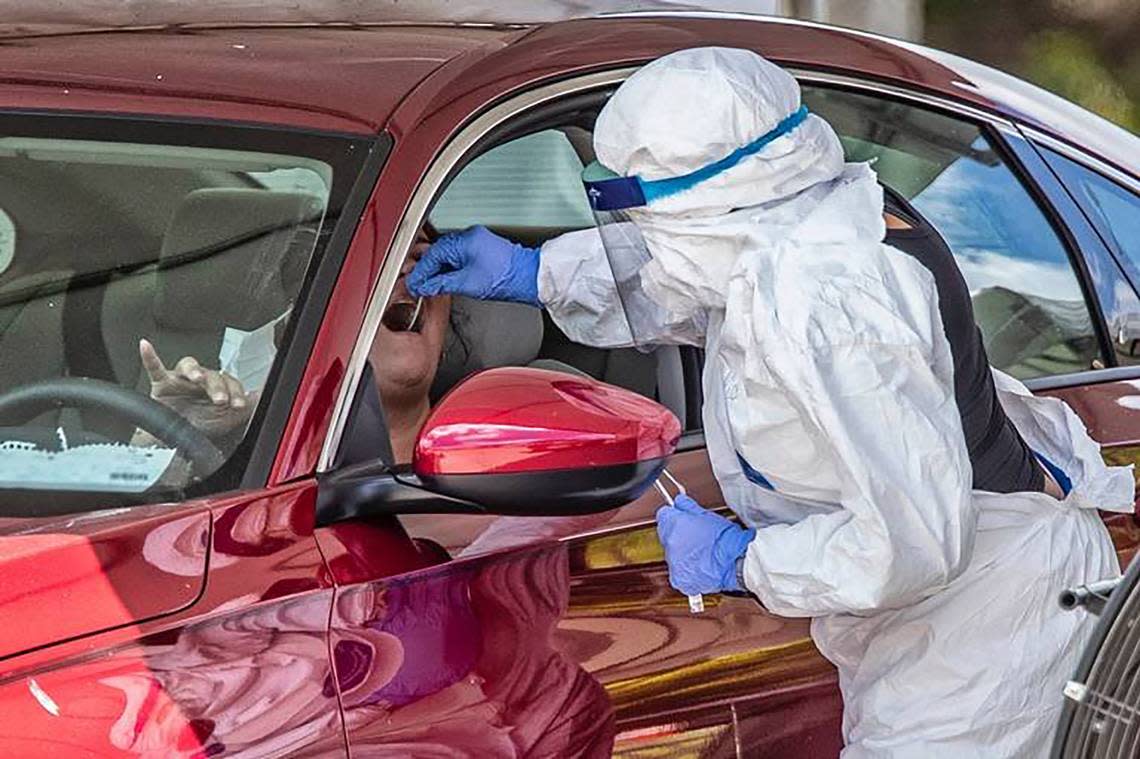 The state of Florida’s COVID-19 dashboard reported 2,385 new cases Sunday, a number just above the average of the previous seven normal Sundays.

Throughout the pandemic, less data collection and entry result in Sunday reports having lower case and fatality numbers than the rest of the week. There was a combined two-day report on Oct. 11. Otherwise, since Aug. 23, the next seven Sundays averaged 2,336 cases.

The state also reported 12 more deaths credited to the novel coronavirus, seven of which came from Miami-Dade and none from Palm Beach, Broward or Monroe counties.

▪ Miami-Dade County reported 309 more people who tested positive and seven more COVID-19 deaths, putting its pandemic totals at 181,942 cases and 3,612 deaths. The average daily positive test rate of the most recent seven days compared to that of the seven days previous, according to the state’s county-by-county breakdown, dropped to 4.07% from 4.58%.

▪ Broward County reported another 285 cases and zero deaths, putting the totals at 83,450 case and 1,520 deaths. It’s average daily positive rate for the last seven days was 4.36% compared to 3.77% for the previous seven days.

Government officials use current hospitalizations to decide the next action in dealing with the pandemic. On the state level, this has been steadily falling over the last month.

The Florida Agency for Health Care Administration reports the number of patients hospitalized statewide with a “primary diagnosis of COVID.” The data, which is updated at least every hour, does not distinguish between the number of COVID-19 patients in hospital intensive care units and those in acute-care beds, which require less attention from nurses.

The dashboard reported another 14,678 people have been tested, a total of 5,960,050 during the pandemic. The state reports its positive test rate for the pandemic is 13.06%.

By the state’s numbers, its average daily positive test rate for the last seven days is 5.09%, up from the previous seven days’ 4.85% and the second consecutive Monday-through-Sunday that number has risen.

Johns Hopkins’ site explains how it calculates positive testing rate for each state:

“We feel that the ideal way to calculate positivity would be number of people who test positive divided by number of people who are tested. We feel this is currently the best way to track positivity because some states include in their testing totals duplicative tests obtained in succession on the same individual, as well as unrelated antibody tests.

“However, many states are unable to track number of people tested, so they only track number of tests. Because states do not all publish number of positive and number of negative tests per day, we have no choice but to calculate positivity via our approach.”

Florida says it figures positive test rate by calculating “the number of people who test positive for the first time divided by all the people tested that day, excluding people who have previously tested positive.”

McConnell expects one other week’s delay in COVID-19 aid