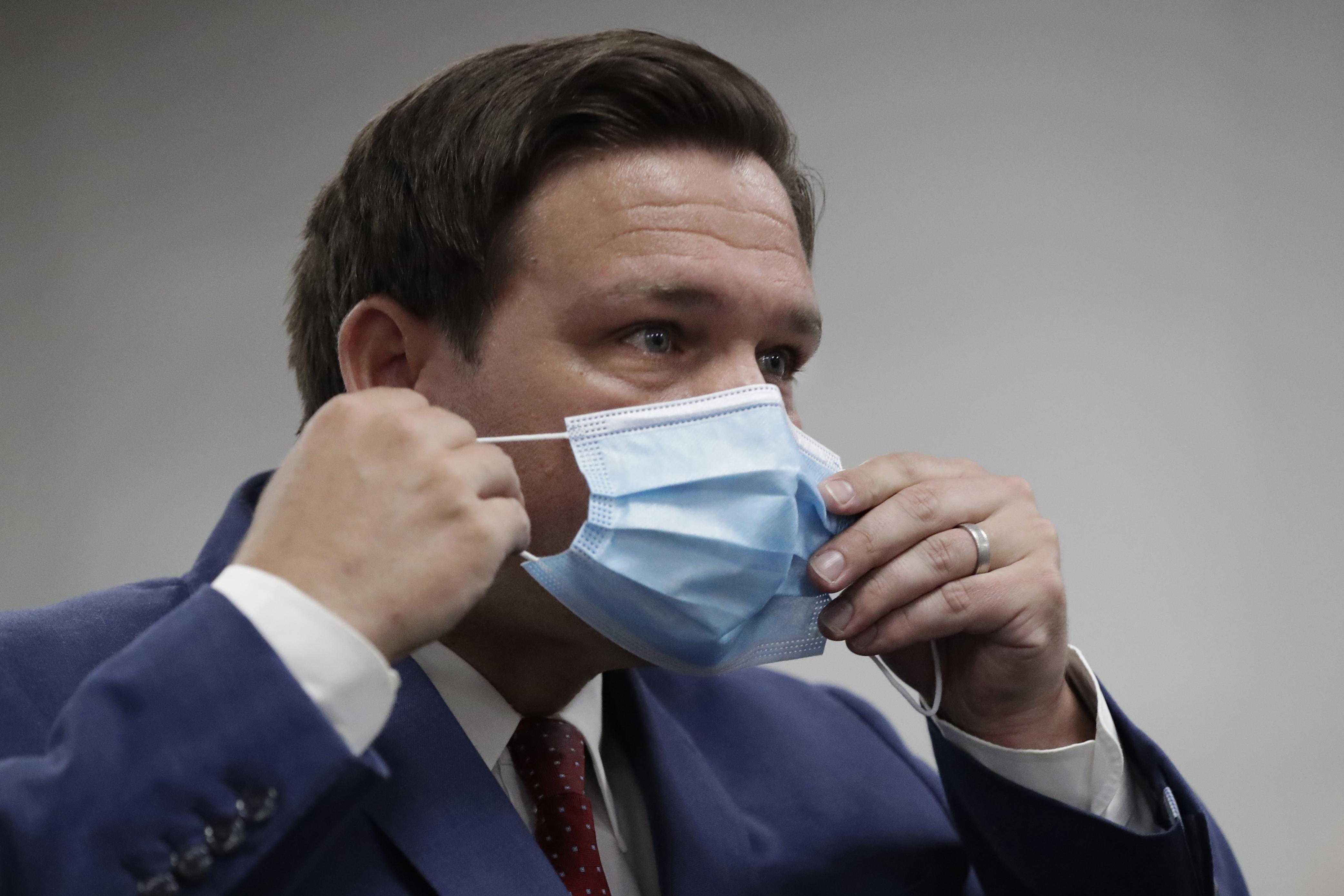 In the span of a few months, Florida Gov. Ron DeSantis has gone from one of the most admired state leaders in America to one of the most disparaged, with an approval rating that has dropped precipitously as coronavirus cases surged.

A pair of recent polls indicate more Floridians now disapprove of the job DeSantis is doing than approve. The latest was released Friday by Mason-Dixon Polling & Strategy. It shows that 49% of Florida voters disapprove of the governor’s job performance, compared with 45% who approve.

That’s a 17 percentage point drop from the 62% of Florida voters who approved of DeSantis in a Mason-Dixon poll from last year.

The stunning turnaround is another example of how politicians often are defined by how they respond in a crisis, and many people are taking a dim view of how Florida’s Republican chief executive has handled the latest phase of the coronavirus outbreak.

DeSantis has been accused of standing by and doing little to halt the march of the virus in his state, allowing Florida to become a global hotspot.

As the virus has raged, DeSantis has closed bars but taken few other steps to contain the virus. He repeatedly played down the explosion of new cases, at first attributing it to more testing and then arguing that the big increase in cases isn’t such a big deal because many of those infected are younger people and less likely to get seriously ill.

Then, when hospitalizations and deaths also began to spike, he questioned the death numbers. When Florida began notching daily records for new deaths this week he dismissed it as a “lagging indicator” and said he is hopeful because hospitalizations and new cases appear to have stabilized, even as they remain at exceptionally high levels.

DeSantis has rejected a statewide mask mandate and refused to further rollback the reopening effort. His administration is even talking about getting bars and breweries open again, while continuing to urge schools to reopen.

Other GOP leaders have taken a different approach. Arizona’s Republican governor has gone beyond just closing bars and also ordered businesses such as movie theatres, gyms and water parks to shut down again.

Coronavirus: Trump praises Jim Jordan and Anthony Fauci after they clashed during hearing

A CNN survey released Sunday found that 63% of Floridians believe DeSantis “could be doing more to fight the outbreak.” That includes 88% of Democrats, 73% of independents and 27% of Republicans who would like to see DeSantis be more aggressive.

Most Republicans, though, believe DeSantis is “doing everything he could do to fight the outbreak” according to the CNN poll, and the governor’s approach appears catered to those voters who don’t want to be forced to wear masks or see more businesses closed down, something that crippled the economy in April and May and put many people out of work.

DeSantis was known as an ardent conservative before he ran for governor, and his coronavirus response mirrors the views of many GOP base voters and President Donald Trump, his political benefactor.

During his time in Congress, DeSantis was a member of the hard right Freedom Caucus who attracted attention for staunchly defending Trump on television.

Trump later endorsed DeSantis in the GOP primary for governor, which helped seal his victory. He has followed the president’s coronavirus playbook of elevating economic concerns above health risks.

But that strategy is collapsing around him, just like it has for Trump, who reversed course and began wearing a mask after deriding them and pulled the plug on holding the Republican National Convention in Jacksonville.

Besieged by critics who say he has taken a reckless approach to the virus that is costing lives, DeSantis has shifted his tone and has been less cavalier and more realistic about the dire situation the state is in. He hired a new communications director.

He may be tired of headlines like this one on CNN’s website: “Florida’s governor just can’t seem to get it right on coronavirus.”

“If there’s a face of the botched handling of coronavirus in the United States – other than President Donald Trump, of course – it’s that of Florida Republican Gov. Ron DeSantis,” wrote CNN editor-at-large Chris Cillizza.

The governor’s GOP supporters might shrug that off and allege media bias, but polls show many Floridians agree.

DeSantis even was targeted by the Lincoln Project, a group of anti-Trump GOP political operatives who released a viral video mocking the governor. The video – which has 1.1 million views – shows DeSantis’s awkward response to protesters at a coronavirus press conference and ends with music from the HBO show “Curb Your Enthusiasm,” a show known for exploring the comedic possibilities of awkward scenarios.

DeSantis also took heat when he resisted a shutdown longer than most governors. He seemed determined to avoid such criticisms with his reopening effort, which he pitched as a slow, phased-in approach that prioritized safety.

But the flood of recent cases has raised questions about whether DeSantis reopened too fast and without proper guardrails in place. While testing has expanded significantly, some have complained about a lack of contact tracing that made it difficult to corral those exposed to the virus.

There also has been criticism that DeSantis declared victory too early and has been unwilling to acknowledge his missteps.

After ending Florida’s lockdown in May and enjoying relatively low numbers of new cases in May and early June, DeSantis took a victory lap, saying the state’s delayed lockdown was prudent. He slammed the media and public health experts, saying they pushed a false narrative that the state could be swamped with new cases that would overwhelm the health care system.

The portrayal of DeSantis as fumbling through one of the biggest crises in a generation is a stark contrast to his early image as governor.

A year ago DeSantis was riding high, with a Morning Consult poll showing he was among the 10 most popular governors in America. His positions on education, marijuana and the environment all had bipartisan appeal.

Now DeSantis is in the national spotlight on a regular basis. What he does now will shape his reputation more than anything else, and so far most Floridians don’t like what they’re seeing.

In addition to the Mason-Dixon poll, a recent Quinnipiac University poll also found a big drop in the governor’s approval rating.

Just 41% of Florida voters approved of the governor’s job performance in Quinnipiac poll, down from 53% in April. The poll also found that 79% of Floridians believe face masks should be required in public, 62% think it’s unsafe to reopen schools and 61% believe DeSantis reopened the economy too quickly.

Just 37% of Floridians approve of how DeSantis has handled the coronavirus response, compared with 59% who disapprove.

That spells trouble for a politician who will face reelection in two years and is viewed by many as a harboring presidential ambitions. DeSantis’s reputation has taken a big blow, and it could sink further.

The next big test for the governor comes in August when schools are scheduled to reopen in many parts of the state.

Right now that looks like a daunting task rife with risks for students, teachers, parents and the broader community. If it doesn’t go well, many people may blame DeSantis.

Pandemic spike in deaths of homeless folks now not because of COVID-19, learn about unearths