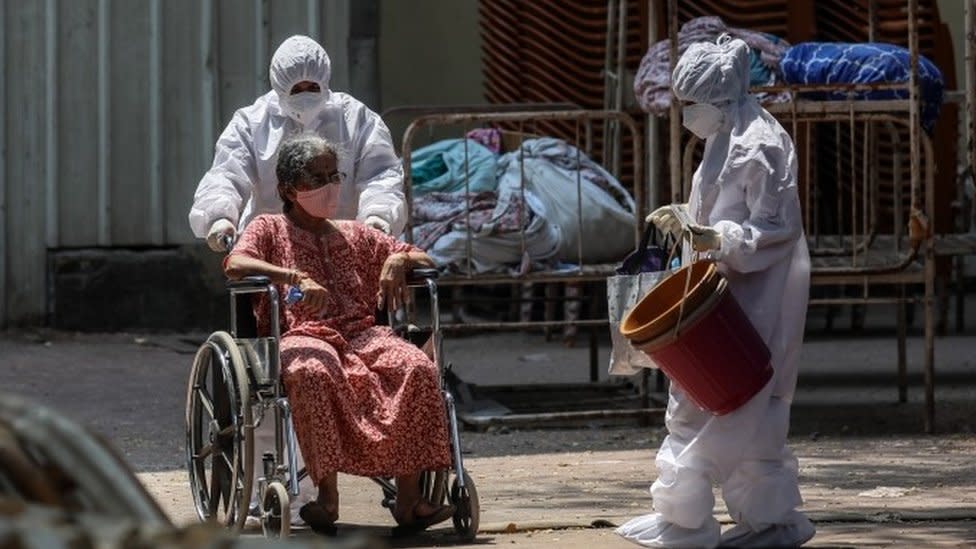 Infections continues to soar – with another 320,000 cases on Tuesday

Medical supplies from the UK arrived in India on Tuesday – the first international shipment aimed at stemming a devastating Covid-19 surge.

Ventilators and oxygen equipment landed in Delhi, but far more will be needed, with many hospitals overwhelmed and people waiting in the streets outside.

One health adviser called the aid for a nation of 1.3bn “a drop in the ocean”.

Zarir Udwadia, who works in Mumbai hospitals and counsels the government, told the BBC’s Today programme the currently pledged supplies would have limited effects. He said he was seeing “ward after ward full of patients struggling to breathe on ventilators of different forms and shapes”.

Dr Udwadia said the complacency over getting vaccinated during the first wave had now given way to long lines of people outside medical centres jostling to get shots.

Although India’s statistics currently stand at 17.6 million cases and 197,500 deaths, some believe the real figures to be much higher. One investigation by NDTV found that over the past week in Delhi alone some 1,158 deaths may have gone unrecorded.

What aid is arriving?

The UK shipment of 200 pieces, including ventilators and oxygen concentrators – which will help hospitals manage oxygen supplies – was unloaded at Delhi airport on Tuesday.

Foreign ministry spokesman Arindam Bagchi said it was “international co-operation at work”, but it is just the first trickle in what needs to be a flood of supplies for a nation of 1.3 billion people.

US President Joe Biden said on Monday he would send up to 60 million doses of the AstraZeneca Covid-19 vaccine abroad and, although the destinations were not given, India could be a prime recipient.

The UK, however, said it would not be sending vaccine doses to India imminently. “We are moving through the UK prioritisation list for our domestic rollout and we don’t have surplus doses, but we will keep this under review”, a spokesman for the prime minister said.

France is sending oxygen production units, as well as oxygen containers and respirators, and some shipments of empty cylinders have already arrived from Thailand and Singapore.

And India has stepped up its own efforts – the first “Oxygen Express” train, which aims to transport 70 tonnes of the gas, arrived in the capital.

The surge varies from state to state, with Maharashtra, Uttar Pradesh, Karnataka and Kerala, along with Delhi, among those badly affected.

Images from many Indian cities show people waiting outside hospitals in ambulances or lying on makeshift beds, while elsewhere flames rise from the funeral pyres of victims.

Actor and singer Priyanka Chopra was among those sending out messages calling for international help:

What is the vaccine situation?

It is one of rising concern.

India has opened vaccination to all adults from 1 May – another 900 million people – but there are fears supplies from the two Indian sources, the Serum Institute of India and Bharat Biotech, cannot even meet current demands for the over 45s.

The government denies there is any shortage of vaccines and has approved funds to boost production at the Serum Institute to 100 million doses a month by the end of May.

But health ministers from some states say they have been warned they may not get the supplies they need – particularly given the surge in demand from the public.

India has so far administered initial jabs to about 10% of the population.

Dr Udwadia told the BBC the rollout had been “glacially slow” and at this rate the country would not reach anything approaching herd immunity within 600 days.

He said that, because of the limited effects of the first wave: “We let down our collective guard and we were urged to by our leaders. Instead of being asked to be vigilant we heard self-congratulatory declarations of victory.”

Dr Udwadia, and another doctor who spoke to the BBC, Devashish Palkar, both said they were seeing an increase in younger people becoming infected.