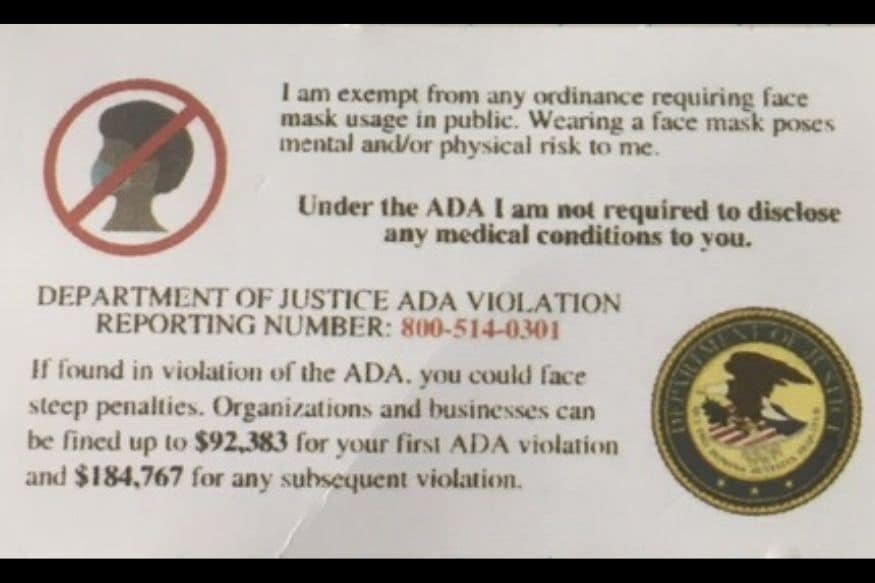 Many cards even carried the stamp of the DOJ and a warning, ‘If found in violating of the ADA you could face steep penalties’.

Countering the false claims of ‘Face Mask Exempt’ cards that have gone viral on social media, the United States Department of Justice (DOJ) said that it has not issued any such cards and doesn’t endorse such claims.

The viral images of different sorts of identification cards read, “Wearing a face mask posses a mental and/or physical risk to me. Under the Americans with Disability Act (ADA) I am not required to disclose my condition to you.” Many cards even carried the stamp of the DOJ and a warning, “If found in violation of the ADA you could face steep penalties.”

Taking to Twitter, the US Attorney Office of the Middle District of North Carolina shared the image of one of such cards and said, “Fraudulent Facemask Flyers, “Exempt” Cards not Authorized by U.S. Department of Justice.”

In another statement, the MDNC said, “Do not be fooled by the chicanery and misappropriation of the DOJ eagle,” adding, “These cards do not carry the force of law. The ‘Freedom to Breathe Agency,’ or ‘FTBA,’ is not a government agency.”

The U.S. Attorney’s Office for the District of Maine took to the social media to share another image of the fraudulent card saying, “This is an example of a card being distributed in Maine, claiming that the bearer is exempt from face mask requirements under the Americans with Disabilities Act. These documents are not issued or endorsed by the justice department.”

According to a report by the TIME, these cards have been made by a Facebook group called the Freedom to Breathe Agency (FTBA), which said, “Our Face Mask Exempt card was issued as an educational tool based on overwhelming amount of citizens reaching out to us for having health issues and unable to wear a mask.”

Speaking further to the TIME, it said that the cards were not issued ADA/DOJ and following a misunderstanding with the seal, it was changed to avoid any further confusion. “The FTBA card is valid and legitimate educational tool that refers US citizens to their legal and human rights under the Constitution of the United States to prevent discrimination, intimidation and coercion,” it added.